A few weeks ago we had confronted the Roborock S7 and his vibrating mop with theEcovacs Deebot T9 + and its oscillating mop. While both delivered very good results, the T9 + had the advantage of offering an automatic dust dump station, while the Roborock S7 did not.

Today Roborock has just announced the arrival of a solution that will allow it to compete with its competitor: the Auto-Empty Dock. This is an automatic drain station that can be purchased after the fact and only compatible with the Roborock S7. We tested it to see if it keeps its promises.

There is a lot of stuff in the box: the base of the station and its body that will have to be assembled, an accessory that will hold the optional dust bag, a single bag is provided, and a dust bin. Note that a black version exists, just like for the S7 vacuum cleaner.

We first look at the suction motor, the cylinder to the left of the station. It comes apart so you can clean the filters, which Roborock says block 99.99% of dust particles. 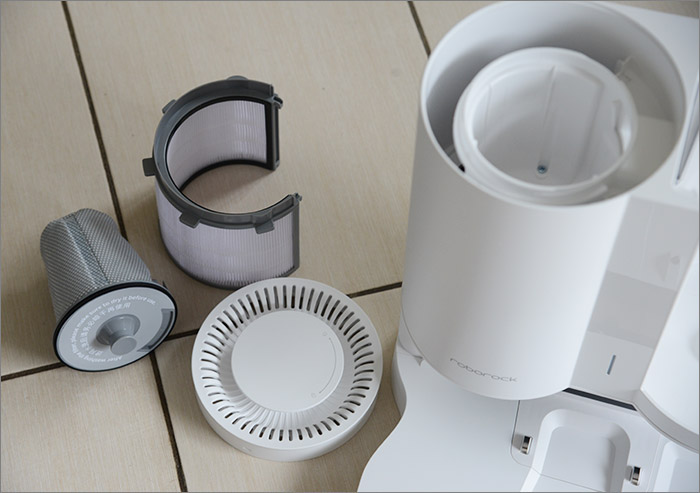 On the other side is the removable drip tray. By default, it is used without a bag and the cylindrical filter can be removed for cleaning. 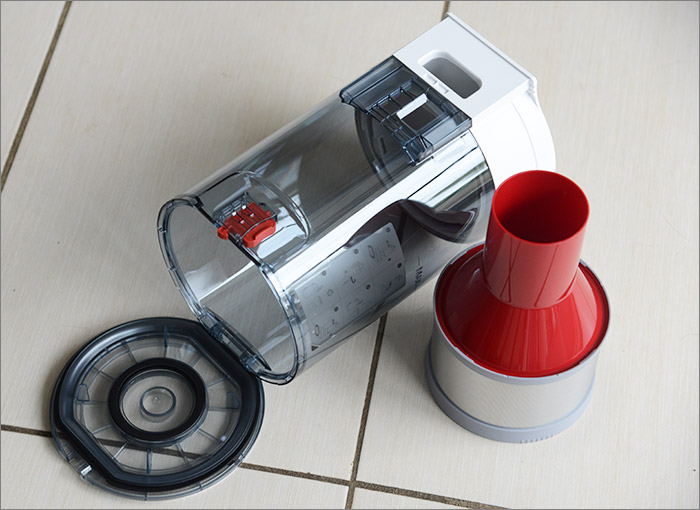 Switching to bag recovery mode is very simple by removing the filter and replacing it with the bag holder, then installing a disposable bag. A good point for Roborock which makes it possible to avoid buying disposable bags or, optionally, to save the cleaning of the filter. Note that the choice to install a bag in the Auto-Empty Dock also saves a little capacity thanks to the absence of the filter. We thus go from 1.5 liters of capacity to 1.8 liters. 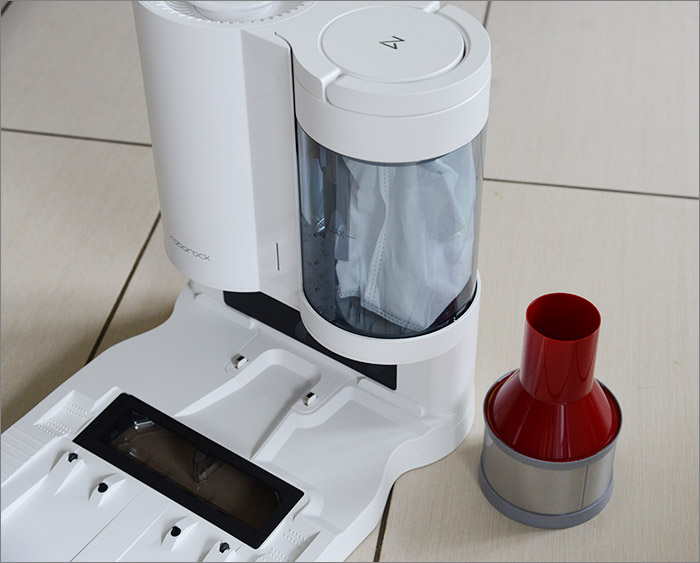 So that the suction system can work, the brand also provides a dust container for the robot which will replace the original one. They are almost identical, with the exception of a valve to allow air to pass. 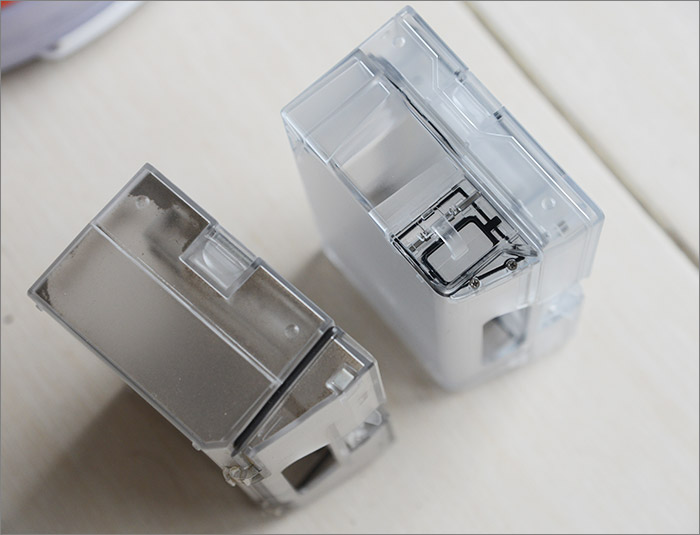 You can understand why by reading the assembly instructions. In the robot, it is necessary to remove the cover which allows to pass an air inlet which falls just in front of the claper of the bin. 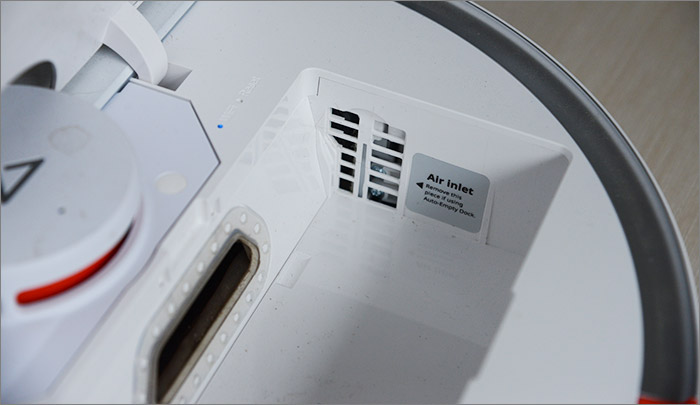 But that’s not where the dust goes. Roborock explains that he chose an outlet via the main brush area, ie where the dust is sucked in during operation. This makes it possible to pass objects the size of an M5 screw, we will see if this promise is kept.

Before commissioning, however, the robot must go to its base. A simple press on the dedicated button with the “home” icon tells our S7 to go to its station. After an unsuccessful attempt, and some hesitation, it finally manages to land on its base.

At the software level, no manipulation is necessary. The application immediately detected the presence of the Auto-Empty Dock emptying station. An option in the parameters allows, for example, to choose whether the station triggers the emptying automatically. The other way to do this is in the main interface where an “Empty dust bin” button can be activated manually. 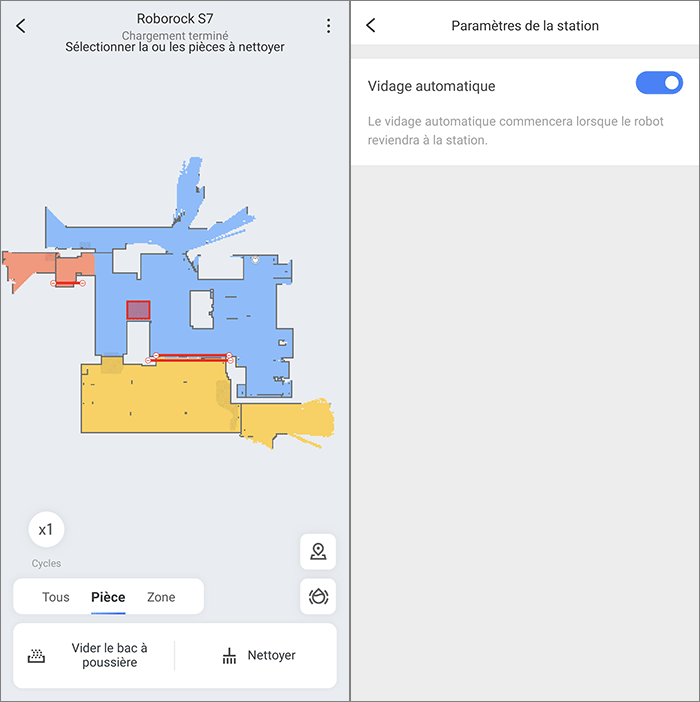 For its first visit, the Roborock S7 was put to the test with a very cluttered and dirty ground: presence of animal hair, dust and stones. We also used the robot’s vibrating mop mode simultaneously, which is perfectly compatible with the suction station.

The return to the station was done without difficulty and the Roborock S7 was wedged very precisely before the emptying of the bin started. This one is noisy, as much as that of the competitors, as could be the suction of a traditional vacuum cleaner. The suction via the main brush and the presence of many bristles, however, posed a problem as we could see when checking the tank. If the small dust had disappeared, a pile of hair was created and prevented the suction from doing its job correctly. 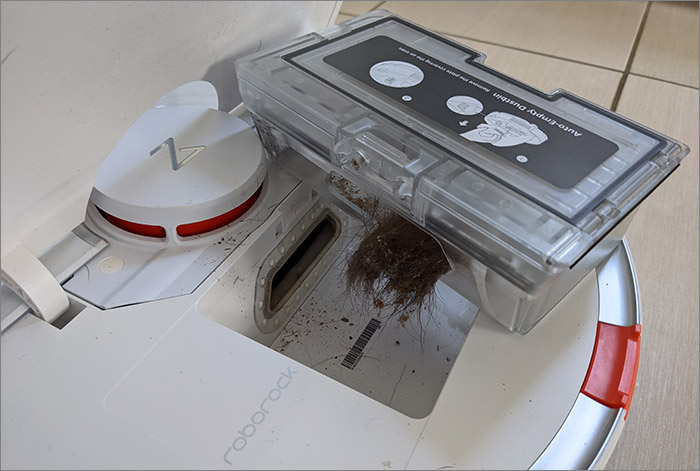 It was necessary to manually trigger a second suction for the emptying to be done completely and to remove the hairs jam. On the other hand, large stones were not removed. The presence of bulky items therefore seems to be a problem for our Auto-Empty Dock. The following aspirations, with less material, however went well.

Update July 17, 2021 : the problem was repeated several times following this bad experience. We contacted Roborock support to try to find a solution. We will update the topic as soon as we have more information. At present we do not recommend the Roborock dump station if you have animals with long hair or which shed a lot of coats in the suction areas.

We have not noticed this difficulty on the competitor Ecovacs Deebot T9 + which has chosen a suction via a dedicated channel and which seems more efficient on this point. Currently, the Deebot T9 also has the advantage of being slightly cheaper since it costs 599 + 299 euros for the S7 and its station, against 799 euros for the T9 +.

However, Roborock plans to offer the Roborocks S7 in a pack with its station and should therefore position itself on a price close to the Ecovacs in the long term. In addition to the price for its launch, its weak point in terms of emptying via the brush could however make those who have floors cluttered with imposing elements such as pebbles or with a lot of animal hair hesitate. Note that the station is only compatible with the S7 model from Roborock.

On the other hand, Roborock retains an advantage in terms of the mop since it lifts up and makes cleaning and vacuuming possible, even on mixed floors combining carpets, rugs and hard floors. On the other hand, the possibility of choosing between a disposable bag and a bagless tank is also a good point, as is the ease of installation. Obviously, not having to empty the small dust bin is the main motivation that can push us to buy the Auto-Empty Dock to accompany the Roborock S7.