If thinness and lightness are important to you, then the Galaxy Book2 Pro 360 might be right for you. Unfortunately, in France, the computer is only available in anthracite gray or burgundy (for the 13-inch model). 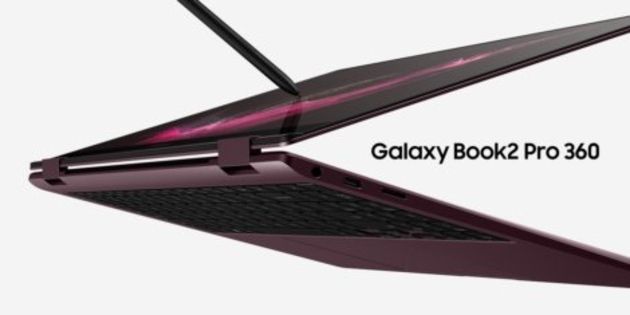 The Galaxy Book2 Pro 360 is powered by a 12th Gen Intel Core i7 processor, 16GB of RAM and 512GB of SSD storage. Both models feature a Full HD AMOLED touchscreen with a 16:9 aspect ratio.

If you’re traveling with your laptop, the good news is that the power bank is a standard phone charger-style plug, and the charging cable is USB-C on both ends, reducing backpack clutter.

Samsung offers its S Pen stylus, which is useful for taking notes and filling out forms on the touch screen. However, the stylus is too large to fit into a computer case, so it must be carried separately. 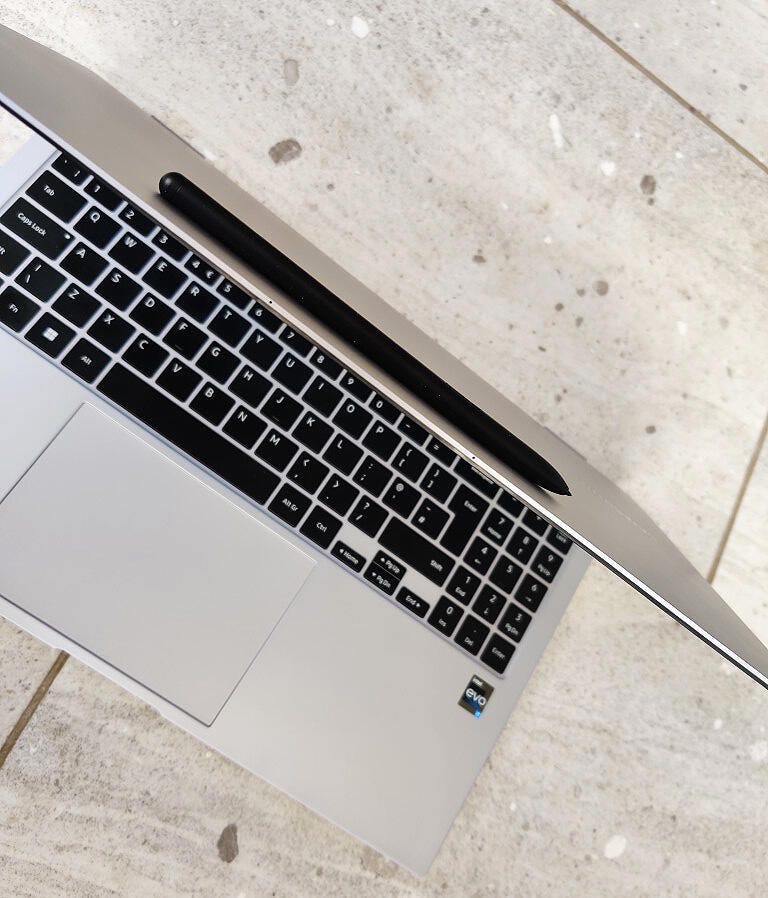 The S Pen adheres to the body of the Galaxy Book2 Pro 360 thanks to a magnet, but the selected position is not standard. The stylus is on the back of the screen at the top, which means you’ll have to rummage around your computer when you want to get the stylus. It crashed a few times in our tests, which isn’t very reassuring if you’re using the computer away from home.

In case you’re wondering, there’s also no way to position the stylus vertically to make it easier to catch. The issue of ergonomics, you could expect better from Samsung.

The 15.6-inch format allows Samsung to fit a full number pad to the right of the keyboard. These keys are a decent size, and the Enter key (twice as high as the rest) separates the numeric keypad from the keyboard. You quickly become accustomed to a keyboard that allows you to type efficiently and accurately.

The keys have good travel and feedback, and the keyboard is quiet. The fingerprint sensor is built into the power button, which is located in the upper right corner of the number pad. 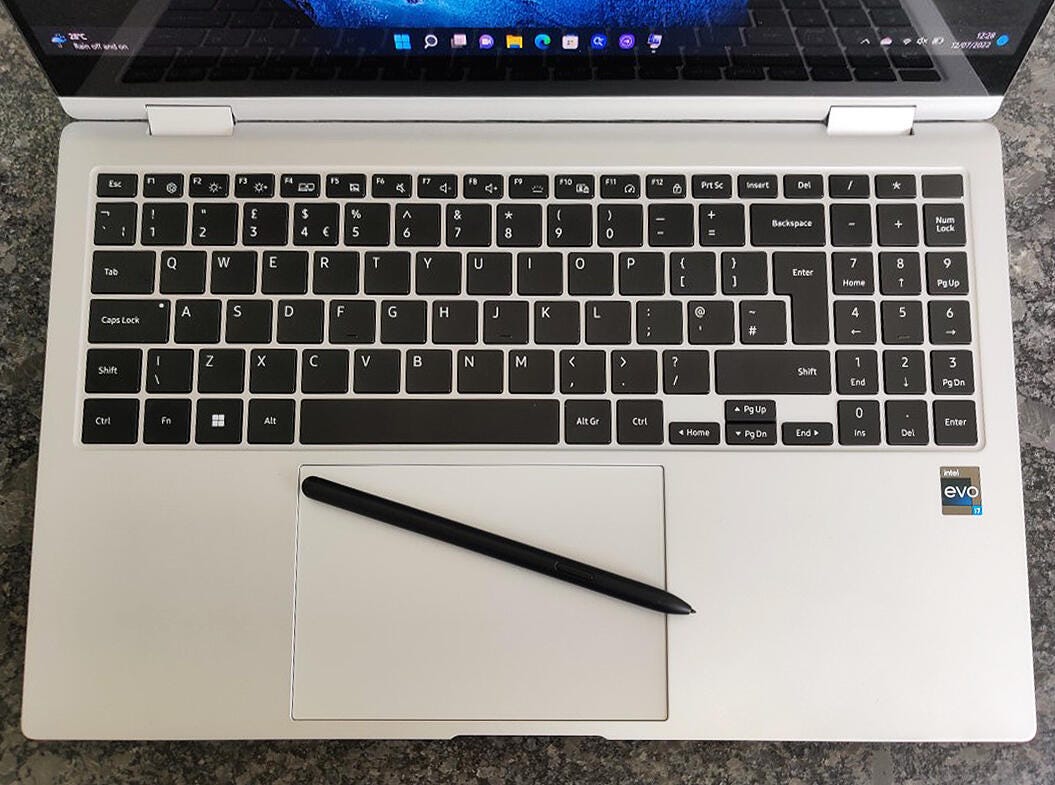 The webcam at the top of the screen supports auto-framing, which keeps the focus on the user and keeps them centered in the frame. The tool works well according to our tests. Unfortunately, there is no privacy cache or support for Windows Hello authentication.

The screen is an AMOLED panel that displays vibrant images with vibrant colors. Touch sensitivity is useful, and not just in tablet mode. It is often more convenient to tap on the screen than to use the touchpad or mouse. The screen is glossy, which may annoy some users.

The 15.6-inch panel makes it easy to work with two documents side by side, and in tablet mode, the large screen is ideal for drawing or other actions with a stylus. Good quality video rendering, whether in laptop or tablet mode.

Samsung’s decision to place two speaker grilles under the chassis makes sense when using the computer in tablet mode. Placed next to the keyboard, they would transmit sound directly to the desk or to the user’s lap. Sound rendering does not have the necessary depth for comfortable watching movies or listening to music, high frequencies prevail in various sound environments. 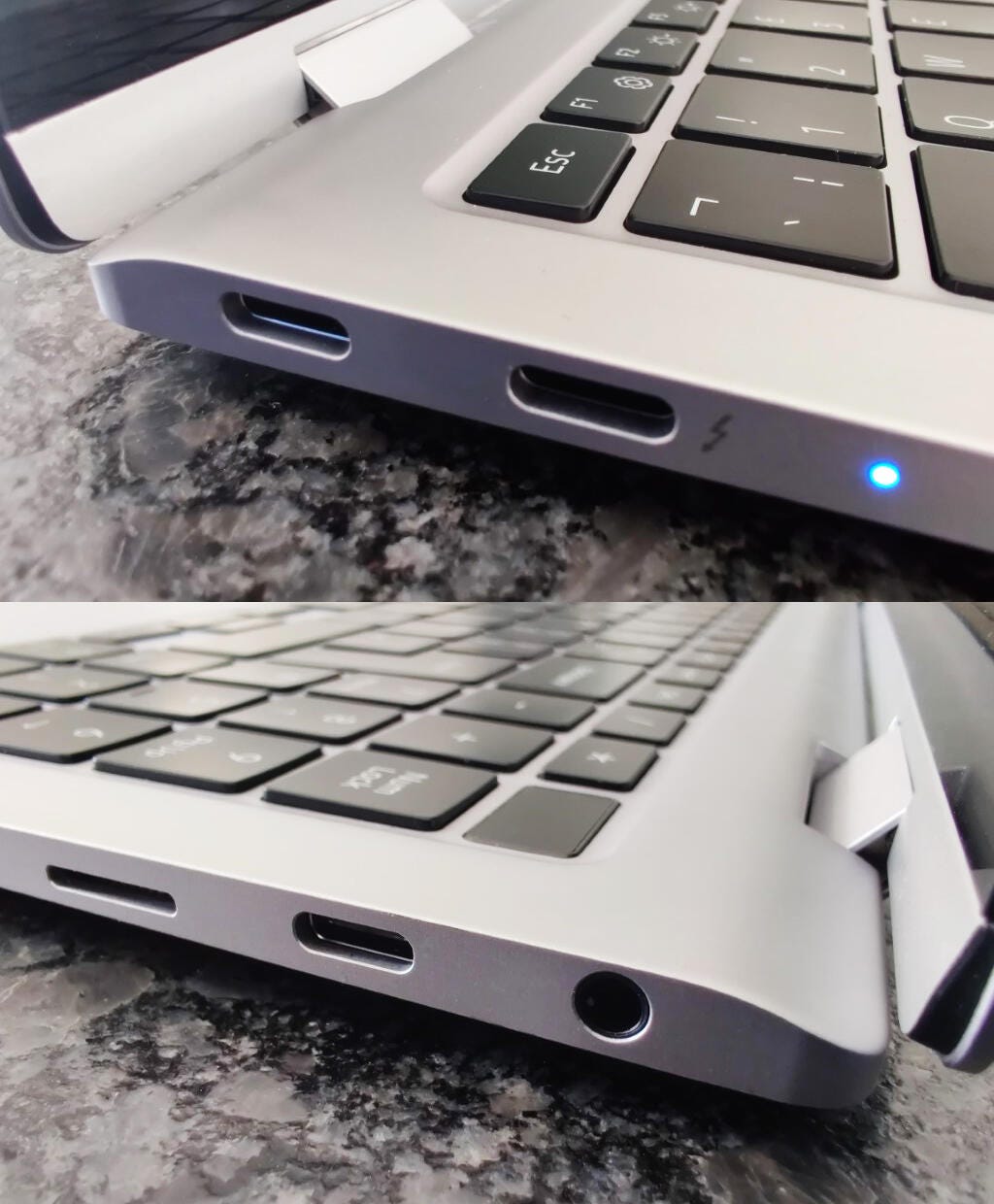 Regardless of the screen size chosen, the number of ports is relatively small. There’s a Thunderbolt 4 port, two USB-C ports, a microSD card slot, and 3.5mm audio in/out. HDMI, Ethernet, and USB-A will require a hub or docking station. The wireless modem is Wi-Fi 6E compatible and Bluetooth 5.1 is also available.

Samsung is very interested in sharing data between devices. So screen sharing with the Galaxy Tab 8 is native, and Samsung’s Multi Control software allows you to effectively use both screens at the same time. Owners of compatible Samsung phones can share files between devices and can even share phone apps.

According to Samsung, the Galaxy Book2 Pro 360’s 68Wh battery provides 21 hours of video playback, while a 30-minute quick charge provides 8.3 hours of use. I tested the laptop in my usual mode of web applications, video streaming, and music listening. From a full charge, the machine lost 37% in three hours, which suggests a battery life of just over 8 hours. That’s a lot smaller than what Samsung claims, so it’s best not to stray too far from a power outlet.

The Samsung Galaxy Book2 Pro 360 is a disappointing combination of great and annoying specs: S Pen integration is a nice touch, but marred by an unconventional magnetic mount; The OLED touchscreen is crisp and bright, but its FHD resolution is disappointing.

2-in-1 convertible laptops come in a variety of shapes and sizes. Here are the two main competitors with 14-inch and 15-inch screens: