In line with its vision of shaping the future through intelligence and innovation, Samsung Electronics has announced support for two new startups through its C-Lab Inside incubation program.

Since December 2012, Samsung C-Lab Inside has been established to encourage Samsung employees to explore new ideas and develop a culture of creativity. In the 10 years since its inception, C-Lab Inside has incubated 365 projects and attracted more than 1,500 Samsung employees. This month, Samsung announced the support of two more startups, bringing the total number of startups supported by the company to 59.

In the era of digital learning, it’s no surprise that Samsung Electronics has chosen two innovative EdTech startups in the field of learning and teaching. Two startups were selected: Piloto, an AI-based parental control app that encourages children to interact safely and thoughtfully with technology, and EdInt, an AI-based service that tracks and manages online exams.

Read on to learn about C-Lab Inside, an additional program, and the latest two startups shaping the future of the education industry.

Piloto is an AI-powered learning solution in which a friendly AI character helps regulate children’s screen usage and correct their posture when using smart devices.

The Piloto team is led by Ms. Lee Dayoung, who specializes in early childhood education. Because children tend to have “animistic thinking” or the notion that everything in the world is alive, Lee developed a solution in which an AI character “lives” in a smart device and talks to the child as if it were a friend.

The AI ​​character helps kids develop the ability to manage their own screen time by teaching them to set their own screen time goals. The app also uses a unique natural language processing conversation model to determine a child’s language abilities and communicate with them using easy-to-understand expressions.

Apart from the time of use, Piloto also analyzes the position of the child’s body using the camera installed on their smart device and helps them correct any bad posture. After long periods of play, the app even offers eye exercises to help prevent neck pain and vision loss. In addition, the app also automatically blocks any malicious content, so parents can rest easy knowing that their child’s online content is child-friendly.

During the early stages of developing the app, the team consulted with various child psychiatrists and child psychology experts to create content specifically tailored to the needs of young children. Clinical trials have shown that the app improves smartphone addiction and teaches children to self-manage screen time.

“I want to create an environment where children around the world can run and play in the digital world without harm to their health,” said Lee Dayoung, CEO of Piloto.

The release of Piloto is expected in the second half of this year. 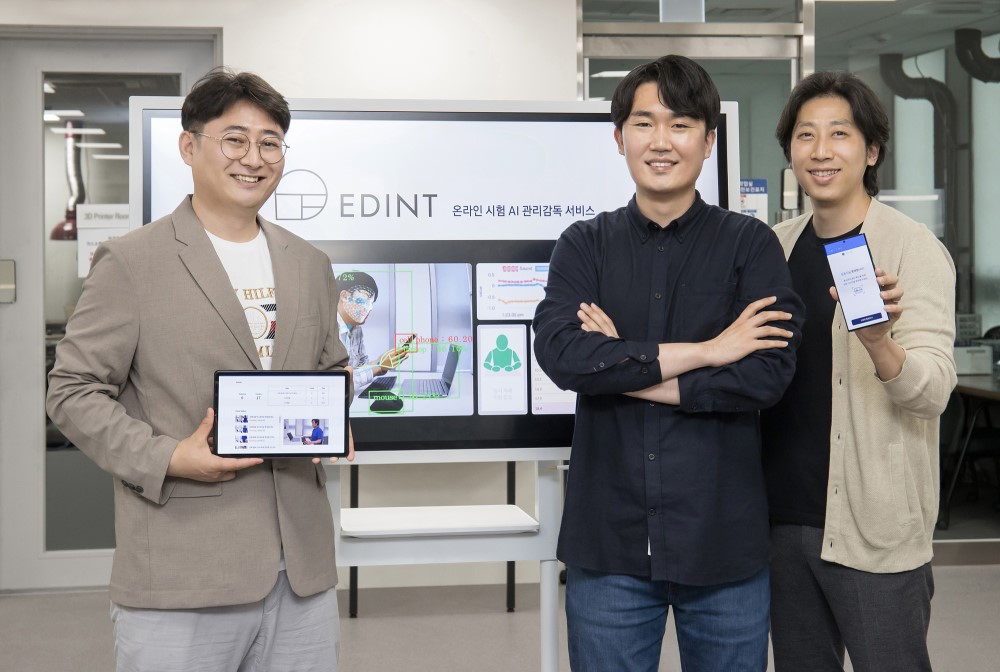 Due to COVID-19, many institutions have been forced to quickly switch to online testing, which has led to an increase in company recruitment fraud and university exams. This trend inspired the creation of the Edu-tech startup EdInt.

Existing online tests are often difficult to set up and the home testing environment is almost impossible to control. Supervisors also have to manually detect sight-only fraud, which can be both inefficient and inefficient.

By scanning the environment with the camera, candidates can easily create an environment for their exam according to the guidance provided by the organizer. As soon as the exam starts, EdInt artificial intelligence analyzes the behavior of the candidates in real time and notifies the supervisor of any suspicious behavior. Instead of relying on humans, using AI to detect fraud can significantly reduce operational costs. In addition, EdInt provides a detailed report and a full test video that can be viewed after each test.

“We will expand into global markets, starting with government agencies, enterprises and national schools,” said Won Dong-gil, CEO of EdInt.

For over 10 years, the C-Lab Inside program has supported ideas from all walks of life, as well as ideas that contribute to society. Since launching in December 2012, 59 software projects have grown into startups, creating over 500 jobs.

Projects selected for the program receive support from Samsung for one year, including office space, research funds, and full creative control over project development.

The C-Lab Inside program has also led to many innovations within Samsung itself, such as Galaxy recycling, eco-packaging, Lifestyle TV “The Sero” and new features for mobile cameras, and Samsung Pay.

As a result, Samsung has been recognized by South Korea’s Ministry of Small and Medium Enterprises and Startups as the best company for domestic venture capital operations over the past two years. Last year, the Korea Fair Trade Commission also recognized it as a “Good Practice for Implementing a Fair Trade Agreement”.

In the future, Samsung will continue to invest in the longevity of Korean startups as part of its “Initiative Plan to Revitalize the Economy and Create Jobs.” Announced in August 2018, the company has committed to incubating 200 internal projects (C-Lab Inside) and 300 external startups (C-Lab Outside) under the C-Lab program over the next five years.

Innovative technologies of the future

The C-Lab program has a proven track record in helping successful start-ups. Recently, 30 startups spun off from C-Lab Samsung Electronics raised a total of 120 billion won in additional investment, including 29 billion won for Linkflow and 14 billion won for Welt. In addition, two startups Salted and Mopic, launched under Samsung’s first C-Lab subsidiary in 2015, have also recently gained industry attention for their powerful and fundamental technologies.

The first subsidiary, Salted, is driving strong sales in the golf sports industry with its innovative fitness tracking and training solution that uses smart insoles to analyze weight transfer, swing data, balance data, and posture data. The company was ranked No. 1 in sales in the golf training category on Amazon at the end of 2020 and is currently maintaining strong growth in the global market with supply deals in the US and Europe. Recently, Salted has also expanded into digital health, based on leg data collected with patented pressure sensor technology. Salted is currently conducting national and international clinical trials for patients in need of gait rehabilitation such as degenerative brain disease and diabetic neuropathy.

Another notable C-Lab startup is Mopic, a company that develops bright field 3D displays and image rendering software that can produce a vivid stereoscopic image. Mopic first started its business as a smartphone case accessory that allowed users to enjoy 3D content without glasses. However, the 3D content market has not grown as fast as expected, which has led to business model challenges. Despite these setbacks, Mopic continued to grow and improve its technology. The company is now receiving collaborations around the world as a business solution, such as using stereoscopic imaging for medical surgery, car infotainment systems, video conferencing, and more. With the recent growth of the metaverse and growing demand for immersive content, Mopic is attracting more attention than ever as a technology company specializing in the production and implementation of 3D content. This success led to a Series B investment of around 10 billion won.