There is fierce competition between robot vacuum manufacturers to differentiate themselves from each other. While some are looking for the lowest price, others are trying to offer more and more features. In our ranking of the best models, the ones we liked the most were the references that suck and wash well. However, there are two of them who feel very lonely.

So when the Shark brand offered us a model of vacuum cleaner with technology close to the one that works best, a mobile mop, it piqued our curiosity. In fact, we knew the Roborock Sonic Vibration Mop and Ecovacs Oscillation Mop, both quite effective. Now let’s explore the Shark AI VacMop Friction Mop (RV2001WDEU).

In the packaging we find the food accompanied by a flat plastic support with non-slip pads, probably to avoid keeping the floor moist after a cleaning session. In addition to the robot, two pairs of side brushes and a wash tank accompanied by mops are provided.

The robot itself is quite modern in appearance with a matte black coating that will hopefully attract less dust than the glossy models. The two Clean and Dock buttons are used to initiate cleaning and to order a return to the charging station. 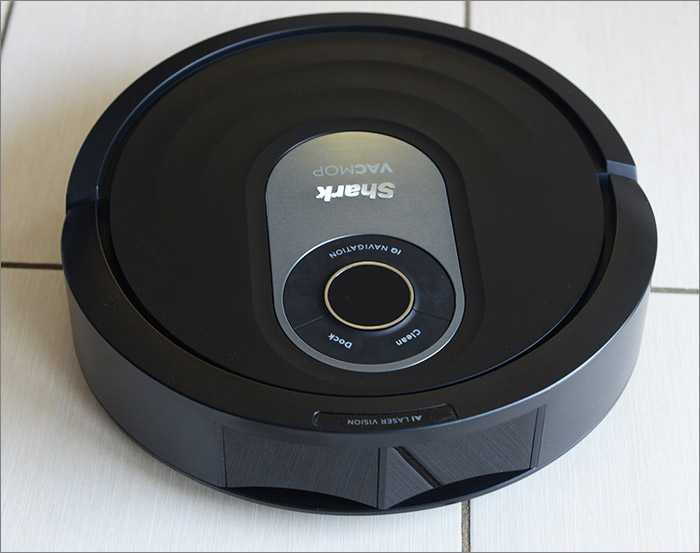 The underside is quite classic with a main brush which, according to manufacturer Shark, is self-cleaning and has anti-tangle and bristle technology. The two side brushes have a single strand. 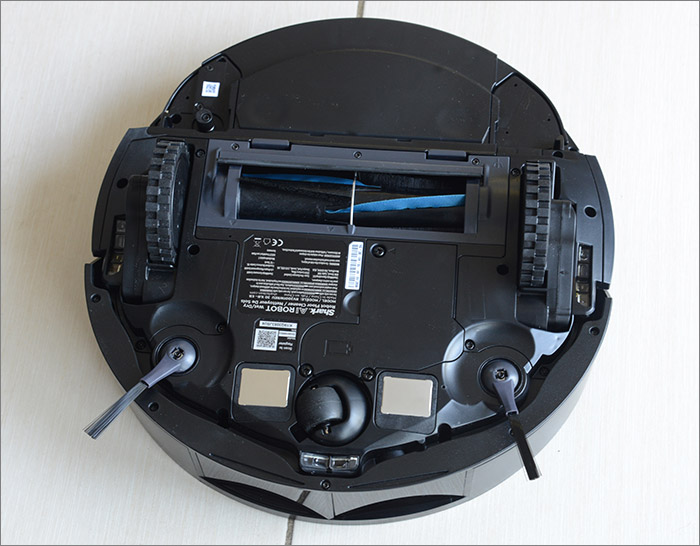 Shark is more discreet with the garbage can, whose capacity does not indicate, which however does not seem ridiculous. The filter is easily detached for cleaning. 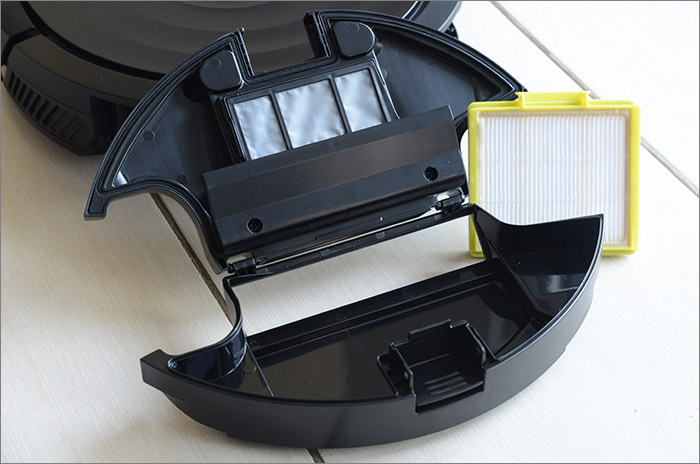 The water reservoir and mop holder fit behind the dust reservoir, we will return to its operation with greater precision in the rest of the test. 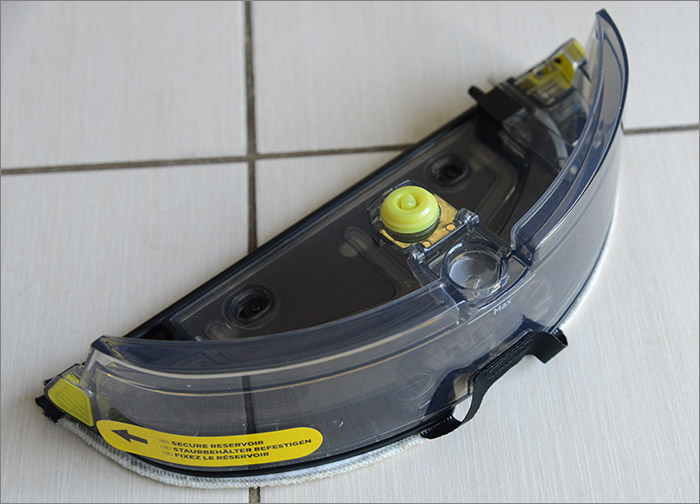 First of all, the robot must be charged in its station, the power button is located on the side of the device. 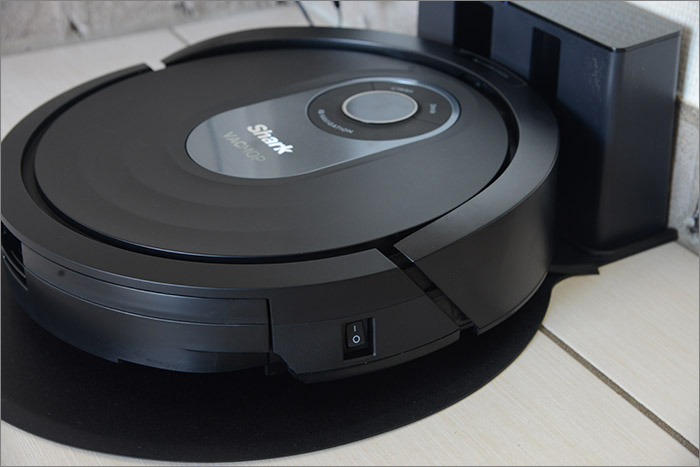 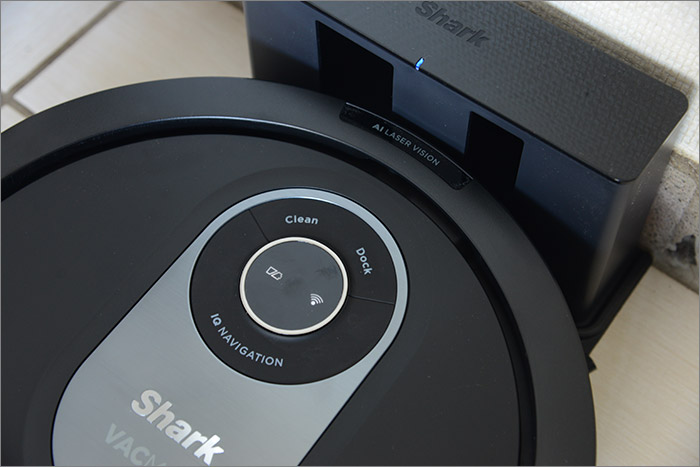 The application to install is called SharkClean, it is available for Android and iOS in the respective stores of the two systems. As with most robots, registration is required. We then followed a fairly classic route: model designation, WiFi pairing, and home wireless network designation. 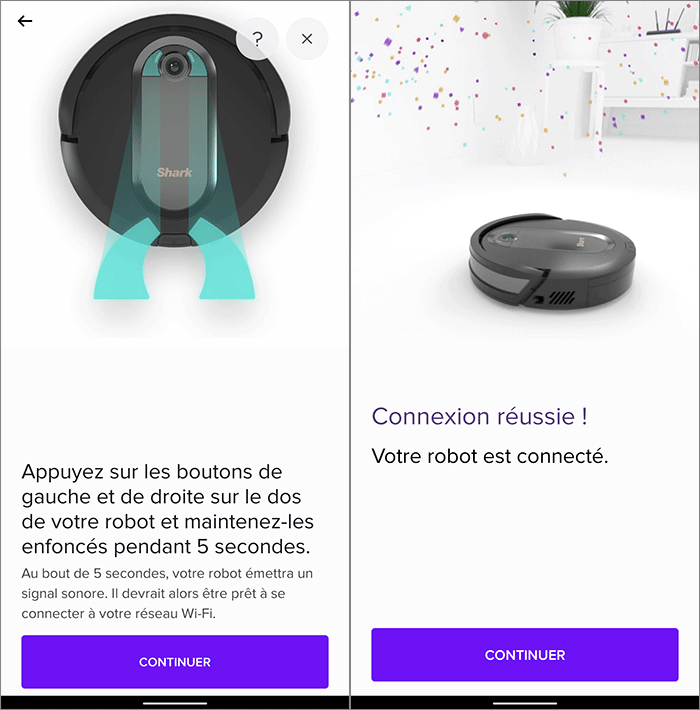 The application explains that it will take two passes for the robot to correctly map the house. These passages must be carried out in vacuum-only mode to be able to detect the carpets and avoid them later in cleaning mode. 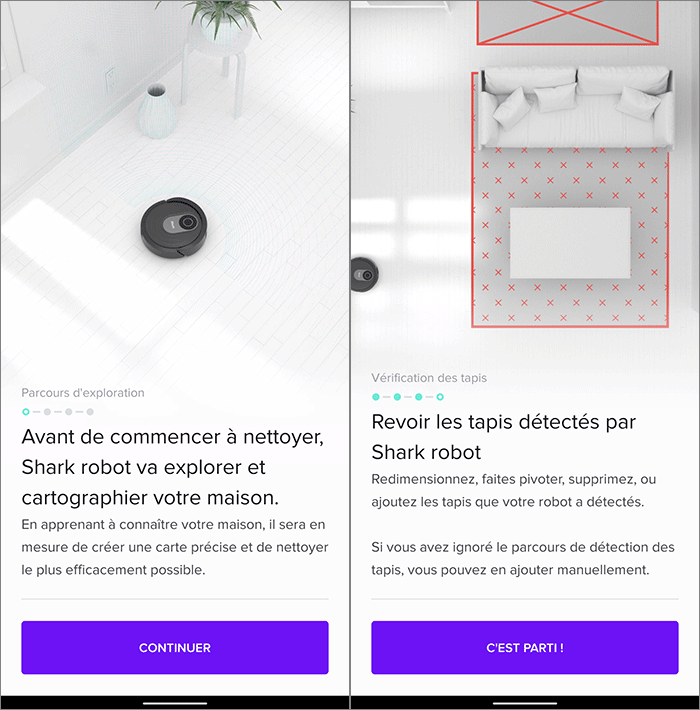 In the help provided, clear and well translated into French for the main elements, Shark explains that your AI VacMop can hesitate a bit during the first passages, that not all manufacturers explain and that they can destabilize during the first ones not with a robot vacuum cleaner. In fact, this is what we have seen.

If the hesitations during the first few passages are not overwhelming, the expected result in terms of mapping left us perplexed. So much so that we opted for a second mapping. The two are completely different, but neither has been able to do something that resembles it in a way that suits our environment. 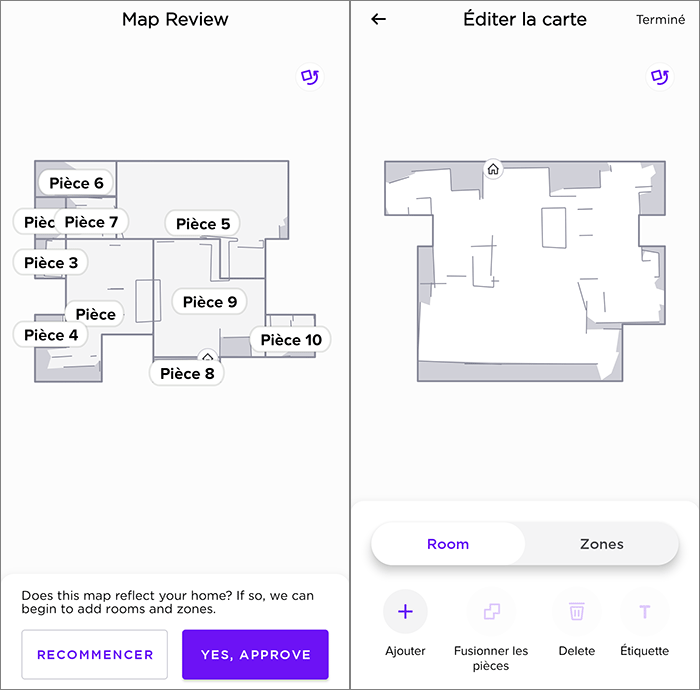 This would not be a problem if the map edit were more accurate. It is possible to merge or create parts, but only rectangular or square. And the lack of precision in the details of the elements of the room such as tables or sofas, which are usually clearly visible in other models, does not facilitate the task.

On the other hand, despite their passage in carpet recognition mode, our two large textile mats were not recognized. It runs through it well but without recognizing that it is a mat or increasing its suction power on the go. You can increase the power manually in the settings, but this makes it very noisy and forces you to stay close to the device, which is incompatible with the purpose of a robot vacuum cleaner. 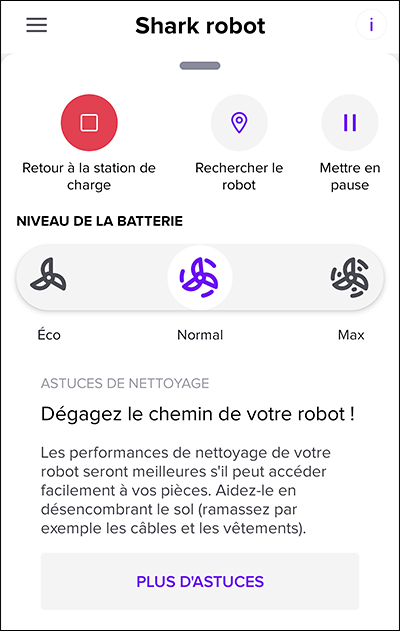 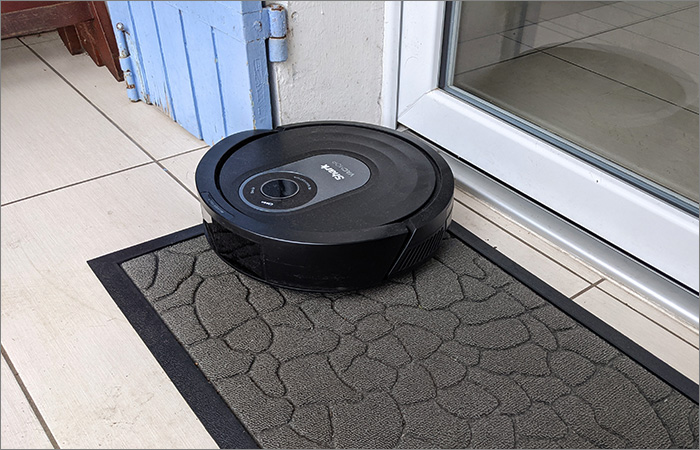 However, it is possible to add the carpet and carpet areas manually. Here again, the inaccuracy of the map makes the task difficult. On the other hand, when it comes to small rugs, virtual areas are difficult or even impossible to resize. And the same problem was found to set a virtual limit. It is impossible to indicate an area that should not be exceeded since only rectangular shapes are available without being able to shrink them as much as possible. 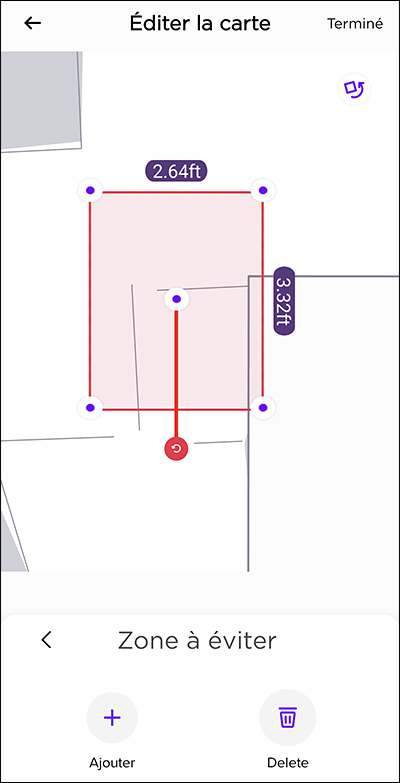 In fact, the small limits would have been very handy to prevent you from getting stuck in our favorite trap where all models remain stuck like here. We don’t usually take it seriously, but without the ability to pinpoint the barriers, it becomes problematic. 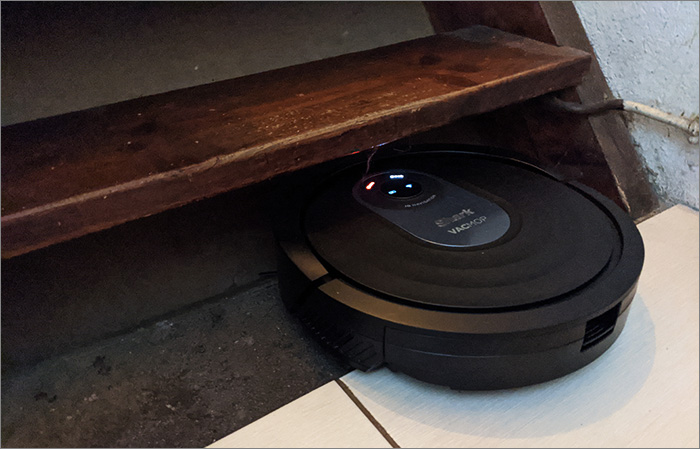 The same problem arises when your sensors detect vacuum. Our robot stops to get to safety, but once its sensors are above vacuum, it asks to be unlocked. There again it would have been necessary to impose a simple virtual barrier, something that the application does not allow except with an area too large for this location.

On the good side, this model does not have a sensor that sticks out in height and therefore easily passes under very low furniture or chair bars. 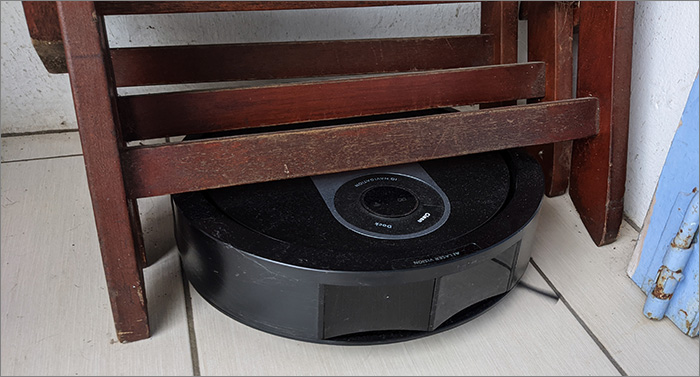 It is also quite agile and stands up, even if it hesitates a bit at times, to overcome obstacles such as the bay window railing.

The other point we bet a lot on was its friction or vibration mop. This is installed in the water tank and is attached to the back of the device. This small movement actually increases your floor cleaning efficiency compared to models with a fixed mop. Despite these good results, of course, you should not expect a miracle on very dry and very dirty stains.

In terms of cleaning efficiency, it is therefore among the models with a fixed mop and our champion the Roborock S7 and its sonic vibration mop or its alternative with the oscillating mop. Deebot T9 +. If we leave this mop parameter aside, it is also far from the effectiveness of the Realme TechLife Vacuum with its automatic carpet recognition that allows you to regulate suction, successful mapping, and ultra-thorough application.

It is precisely at these points where the shark poses a problem. The application is certainly simple, allowing an easy start even for the uninitiated, but it lacks options to restore or correct the cartographic rendering. On the other hand, certain essential points are missing, such as the presence of various types of virtual barriers, more detail on the map, or the possibility of following the robot’s progress during cleaning. In fact, it is impossible to know where it has gone and what surface remains to be cleaned during a session. This information is available from most competitors.

We can regret that the robot has good assets in terms of the device itself. The Shark AI VacMop brush works well on hard floors and doesn’t hold much hair on your brush. With its fairly flat profile, it moves with agility. In an environment without obstacles and without carpet, it will be a very good ally, even for cleaning. And if the manufacturer improves its internal software and application in the future, it could even compete with the best in other, more complex environments.

Meta expands its Facebook Protect program to France and other countries

Meta expands its Facebook Protect program to France and other countries