In launching an “in-depth investigation” into Microsoft’s alleged acquisition of Activision Blizzard on November 8, the European Commission made no mention of Sony, which still dominates the global video game market with its PlayStation console. How the Japanese persuaded Brussels to act.

(As a concession, Microsoft offered Brussels to grant Sony a 10-year “Call of Duty” license for its PlayStation, Reuters reported Nov. 28.)

The European Commission fears that by acquiring Activision Blizzard, Microsoft could block access to Activision Blizzard’s video games for consoles and personal computers. [afin d’être proposés en exclusivité sur les seules console Xbox de Microsoft, ndlr], in particular to symbolic and hugely successful games (games of the “AAA” type) such as Call of Duty,” she said Nov. 8 to justify launching a thorough investigation into the alleged takeover of video game publisher Activision. Blizzard, including the famous Call of Duty license (1). If the European Commission and its executive vice president in charge of competition policy, Margrethe Vestager, did not mention Sony in their statement, the Japanese giant is considered to be the initiator of this in-depth investigation. As of January 20, 2022, two days after Microsoft announced its planned major $68.7 billion acquisition of Activision Blizzard, a spokesperson for Sony spoke for the first time about the proposed deal: “We expect Microsoft to honor contractual agreements and continue to enforce Activision games are cross-platform,” he said in an interview with the Wall Street Journal.

Jim Ryan visited Brussels on 8 September.
The Japanese group wants all Activision Blizzard games to remain available on non-Microsoft video game platforms if the mega-acquisition is allowed. In other words, the Sony PlayStation console should be able to continue to offer “Call of Duty,” that first-person shooter (2) that falls under the “AAA” category of big-budget video games. Six months after the announcement, which has since made a splash in the world of video games, Jim Ryan (pictured), CEO of Sony Interactive Entertainment (SIE), who has been in charge of PlayStation since April 2019, would have traveled to Brussels himself . September 8 – that is, before the European Commission was officially notified of the Microsoft-Activision deal on September 30 – to formally express their concern about the consequences of this takeover if it goes ahead. This is reported by Dealreporter, an information site specializing in mergers and acquisitions (M&A). Jim Ryan denounced the potential dominance of the Microsoft-Activision merger solely for the benefit of

Only subscribers of the bi-monthly Edition Multimédi@ can read the rest of this article. To subscribe, click here or select the online purchase option below.
Read Executive Summary #288 of Monday, November 21, 2022.

You can also send us the following newsletter,
completed and signed to serviceabo@editionmultimedia.com
Or contact us by phone 01 39 15 62 15.

(Click on the newsletter to enlarge and print it) 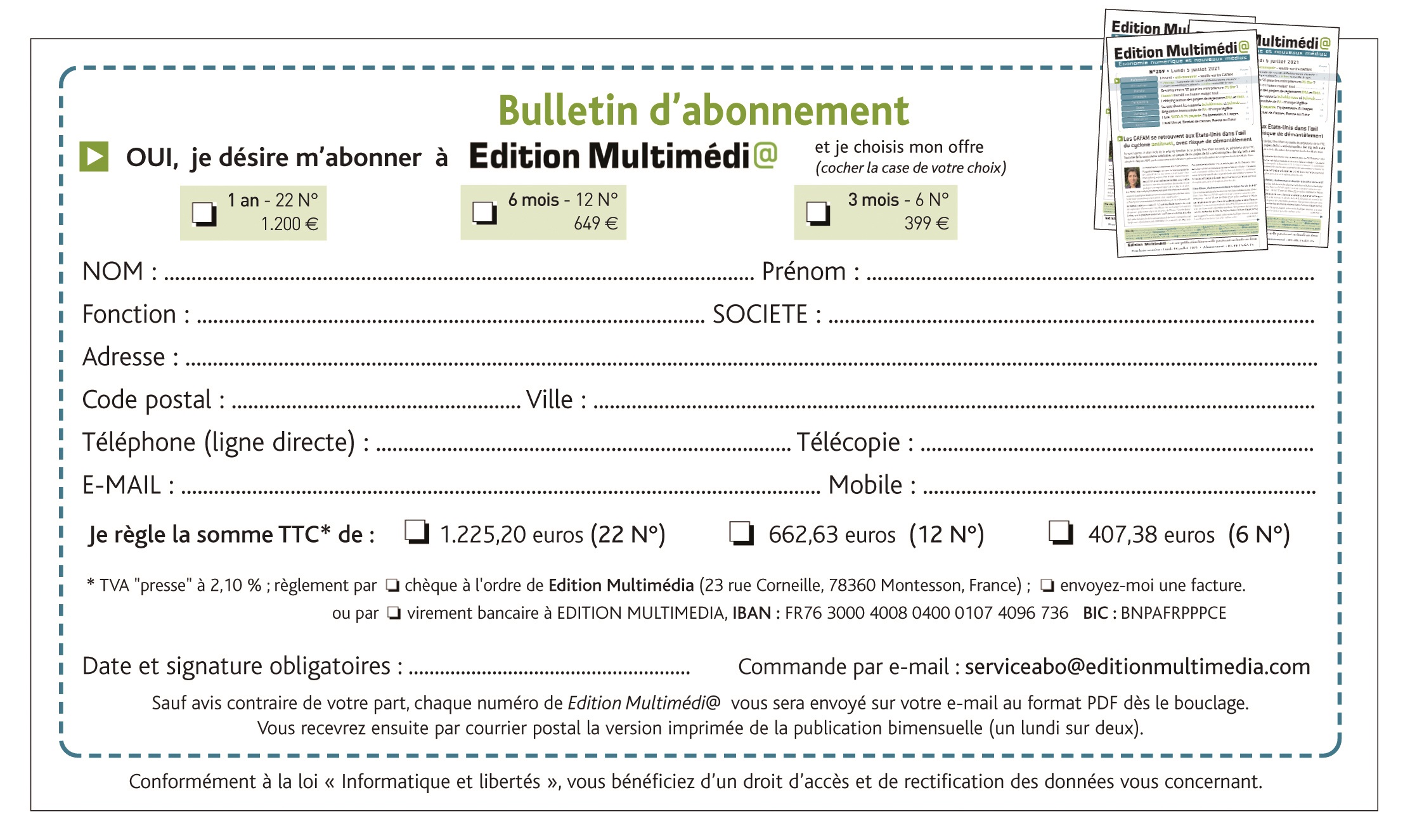