Distanced by Samsung and Apple in terms of sales volumes, Sony has chosen for some time now to better target its typical user.

The Japanese group relies in particular on its expertise in the fields of photography and video to distinguish itself from its competitors. But for the Xperia 1 III, its most high-end smartphone, it adds its know-how in terms of display and audio. But here it is, it is not enough to multiply the components to obtain a convincing result, it is necessary to create a harmony which is not always the case. So mission successful?

The Xperia 1 III being an expensive smartphone, € 1,299 all the same, we are entitled to expect an irreproachable design. At first glance, it looks pretty classic, but there are a whole host of details that make the difference. We think for example of the 3.5 mm audio output jack on the upper edge, which is extremely rare on a premium model, or the SIM card drawer that opens simply with the finger, without using any accessory.

There is also a trigger button dedicated to the camera with a notch for autofocus and a button to launch Google Assistant. Without forgetting either the presence of stereo speakers on the front, a fingerprint reader (very effective), IP68 protection against water and dust or even a Gorilla Glass Victus on the front against scratches and drops.

In terms of ergonomics, Sony has built its Xperia 1 III around a 21: 9 screen, a cinema format. This means that the phone is quite narrow and elongated. A technical choice which facilitates handling, but which complicates access to the elements positioned at the top of the screen. It prevents that his style does not leave indifferent, it is both sober and elegant with a metal frame sandwiched between two glass tiles, slight chamfers at the edges and a vertical photo module. The rear finish with a matte and glossy look doesn’t take too much fingerprints, which will appeal to maniacs. 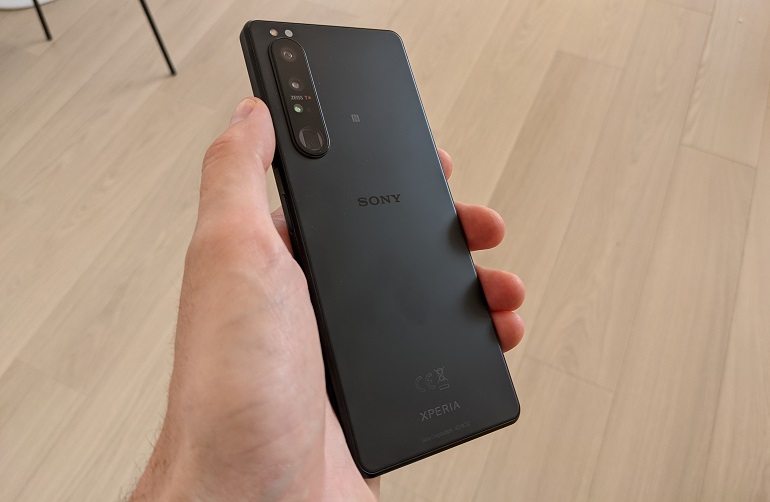 If the design is convincing, we regret that the lower part at the rear sounds hollow with, in addition, the noise of a component that seems to move on our test model.

Screen: OLED in all its glory

To differentiate itself from other premium smartphones, Sony has equipped its Xperia 1 III a 6.5-inch 4K OLED panel with a refresh rate that can be set to 60 or 120 Hz. The colors are superb, the super smooth animations and the videos with UHD definition are simply sublime., especially when they are available in 21: 9 aspect ratio. 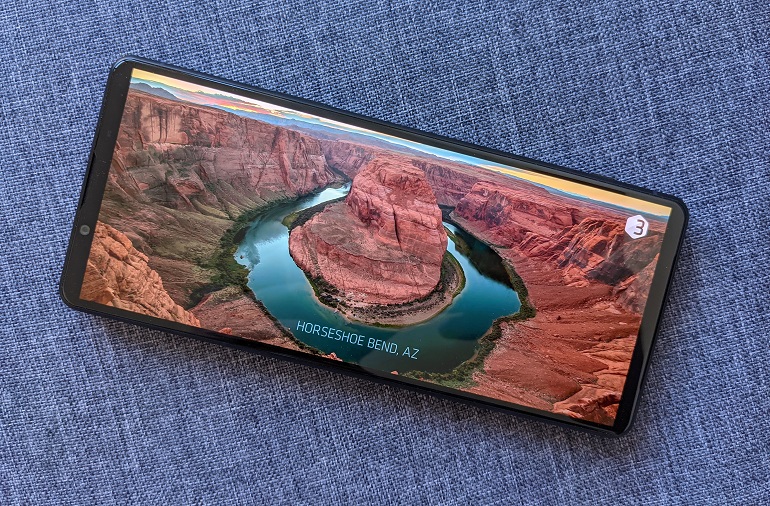 The brightness is satisfactory, but we would have liked the screen to rise a little higher for reading in direct sunlight – it is still readable outdoors. Conversely, bedside reading aficionados will be delighted to learn that the brightness goes down very low, they won’t be dazzled after dark. As impressive as the 4K definition is, this display isn’t drastically better than a lower definition display with a high refresh rate like that of the Galaxy S21 Ultra.

Sony is also playing the personalization card, in addition to the screen refresh rate, you can adjust the white balance, choose between a standard mode and a creative mode (BT.2020 / 10-bit color range) and activate the improvement of video images which notably boosts the brightness. Note that it is not possible to choose the definition of the screen. The phone takes care of it all by itself, it is not always in 4K in order to save the battery.

As the Sony Xperia Pro, you can use the Xperia 1 III as an external monitor for a camera. It doesn’t offer all of the Pro’s options, but it’s handy.

Audio: speakers that make the difference

Sony’s reputation in the audio industry is well established. The manufacturer’s headphones and earphones are some of the best on the market. As we have already indicated, the Xperia 1 III integrates a 3.5 mm jack port, a rarity on this type of device. But this is far from being the most remarkable element; the medal goes to the two speakers located on the front which are simply excellent. Watching videos with this phone is a treat, you can even listen to music without wanting to pierce your eardrums. Sony added Hi-Res audio support (wired and wireless), as well as Dolby Atmos and 360 Reality Audio.

Photo: the main module is excellent, the selfie sensor is less so

Four photo sensors are present on the back of the phone:

The variable telephoto lens is a remarkable technical success, but in terms of really noticeable advantages, we remain skeptical. If you are looking for versatility, this may be a valuable option. But other phones like the Galaxy S21 Ultra offer something similar with two separate telephoto lenses. Fortunately, the Xperia 1 III also has a zoom lens that takes excellent photos.

The telephoto lens with 200 mm focal length and its digital zoom works with an algorithm that reconstructs the image; beyond the marketing discourse, we must admit that the result is very convincing :

Overall, the various sensors of the Xperia 1 III are very similar in terms of image quality and colors. 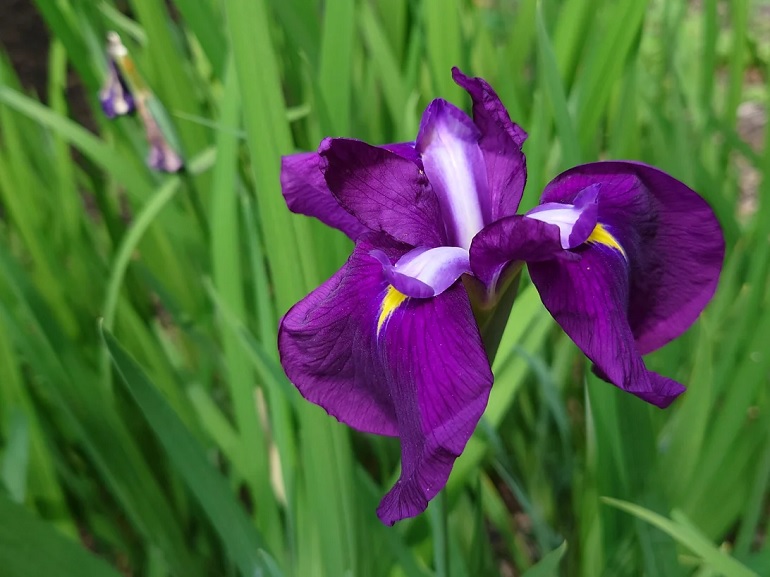 But the most remarkable feature is Eye AF (eye autofocus). This feature is not new to the Xperia range which inherited it from Sony’s Alpha mirrorless cameras. It is a real-time autofocus on the eyes of both humans and animals. 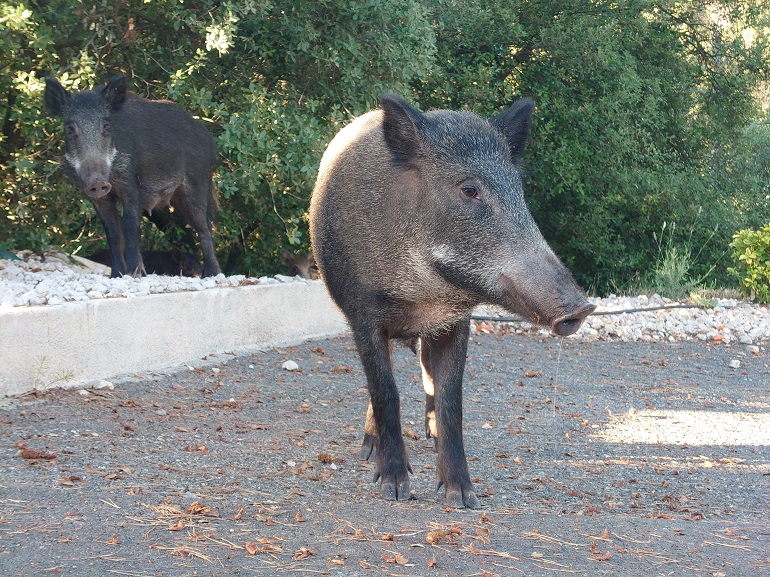 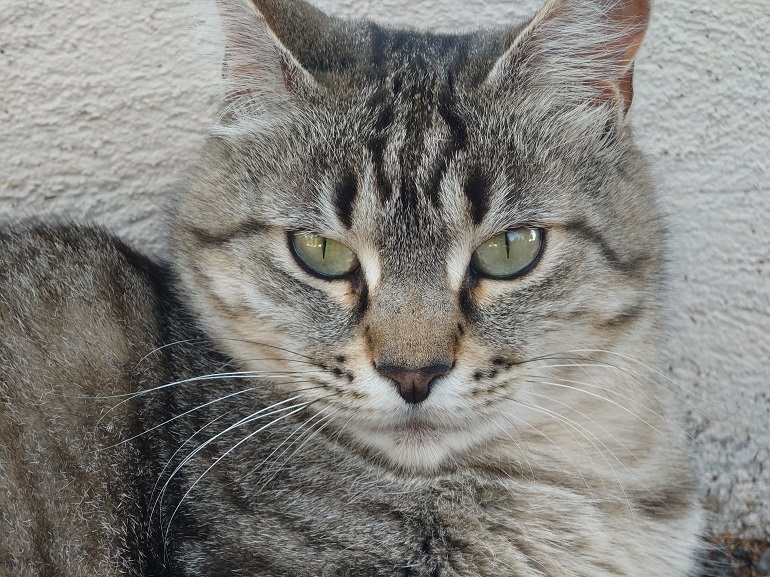 The phone identifies people or animals in the viewfinder and locks the focus on their gaze, even if they move or look away, Eye AF follows them. You don’t even have to touch the screen, it’s ideal for those used to blurry photos.

The front camera is disappointing, too bad for a smartphone which seeks to distinguish itself by the photo: 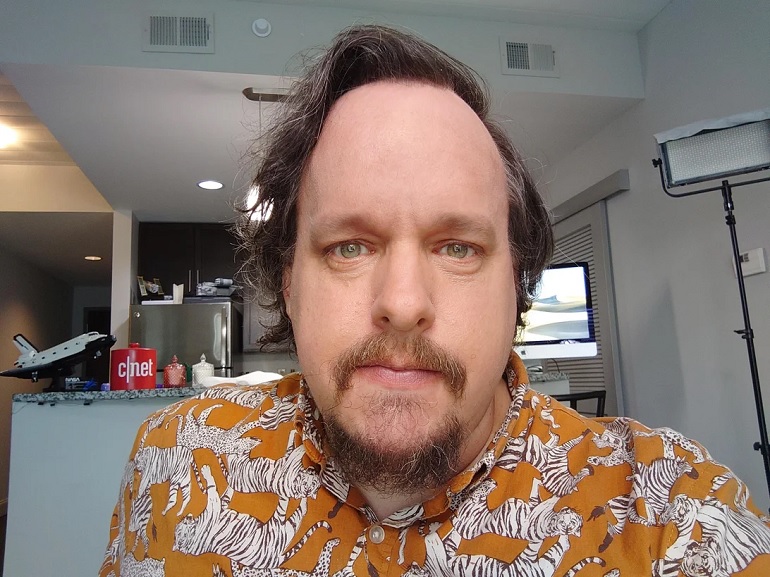 Night shots aren’t particularly remarkable either, it is in the average of the high ranges: 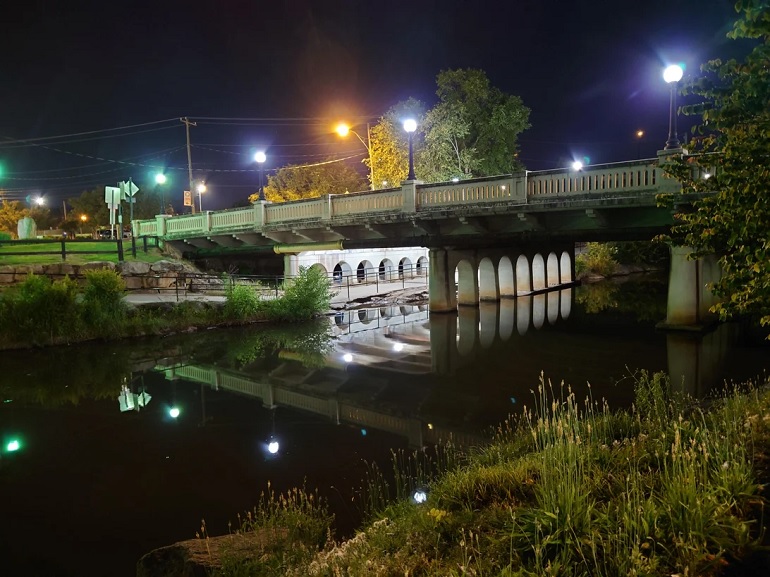 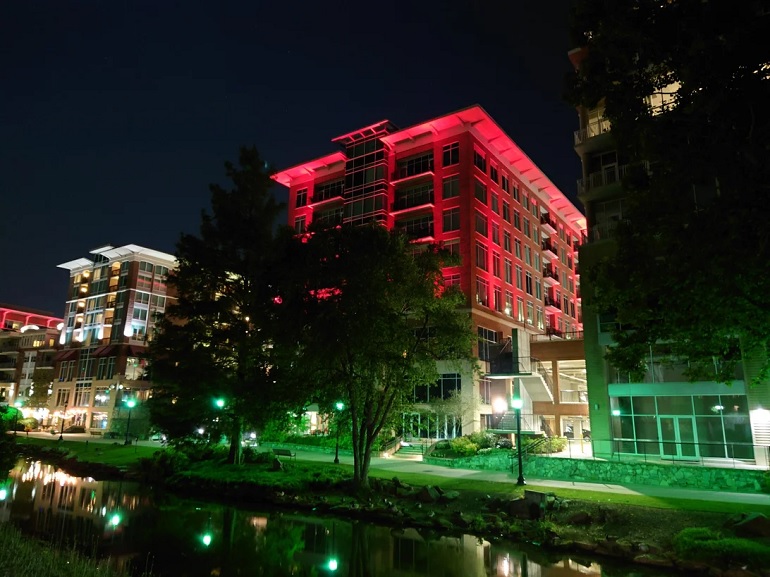 The Photo Pro app for pros and non-professionals

On the software side, Sony offers two custom applications: Pro Photo which replaces the Google Camera application that is usually found on Android and Cinema Pro to push all the video capabilities of the phone.

The good news is that Sony is thinking of both amateur photographers and ordinary users who just want to take great photos without the hassle. The application thus opens on a “Basic Mode” which is actually a modified version of Google Camera. You can quickly capture images, especially since the autofocus is quick to respond.

The Cinema Pro app awakens the director in you

If you like manual controls or have a more cinematic approach to shooting videos with your smartphone, the Cinema Pro app is for you. As with the Xperia 5 II, it can now record 4K videos at 120 frames per second with the main camera and save them as a video file at 30 frames per second. Slow motion footage with Cinema Pro is amazing. The videos are beautiful. 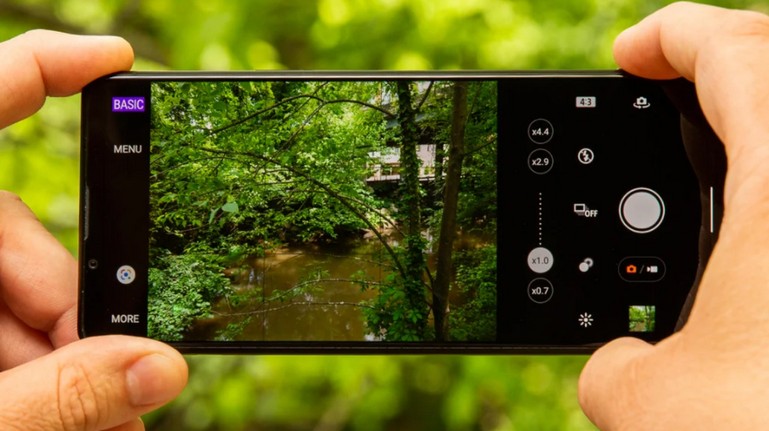 However, the Cinema Pro app has some limitations. Low-light videos are of poor quality. This is because the app is designed to shoot at a maximum ISO speed of 800. Also, when shooting outdoors on a sunny day, the ISO is lowered, which means using a ridiculously low shutter angle to compensate.

Performance: a classic top of the range

The Xperia 1 III is equipped a Snapdragon 888 processor and 12 GB of RAM, which ensures solid performance, especially for recording videos and playing games. On the test bench, it ranks average for Android smartphones with a Snapdragon 888 SoC. 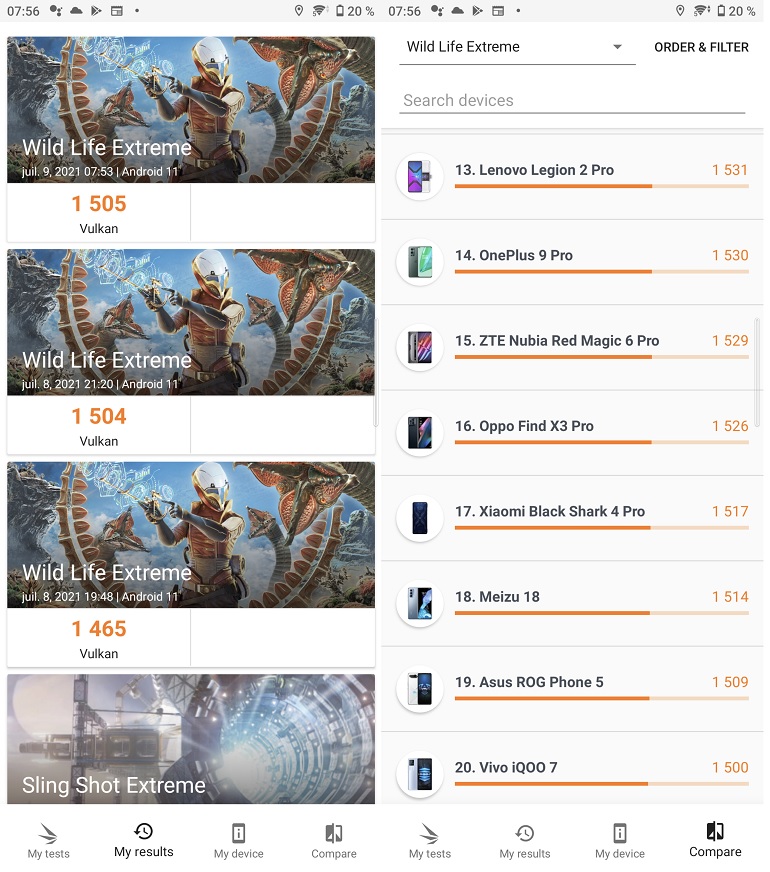 The most important thing is that the daily experience is pleasant and it is.. There is no slowness whatsoever in terms of animations, transitions or launching applications. It must be said that it is well helped by its 120 Hz screen. a tendency to heat up when it is used a little too much. However, this does not impact performance, which remains stable. In any case, you will be able to run all the games available on Android with the configuration to the max.

On the other hand, big disappointment on the side of autonomy. We didn’t last more than a day with the 4,500 mAh battery. In CNET.com’s video endurance tests, it lasted 16 hours and 12 minutes with the screen set to 60Hz, which is an acceptable amount of time. On the same test with the screen at 120 Hz, it lasts 10 hours and 45 minutes. Which is far from satisfactory. The 30W fast recharge allows you to recover half the autonomy in 30 minutes.

What about the software?

Sony offers, as is the case on most of its models, a very little modified version of Android. The overlay is light, regulars will therefore not be disoriented and new users will quickly find their marks. The arrival of Android 12 in the more or less near future should bring a little freshness to this graphical interface which is starting to show its age. 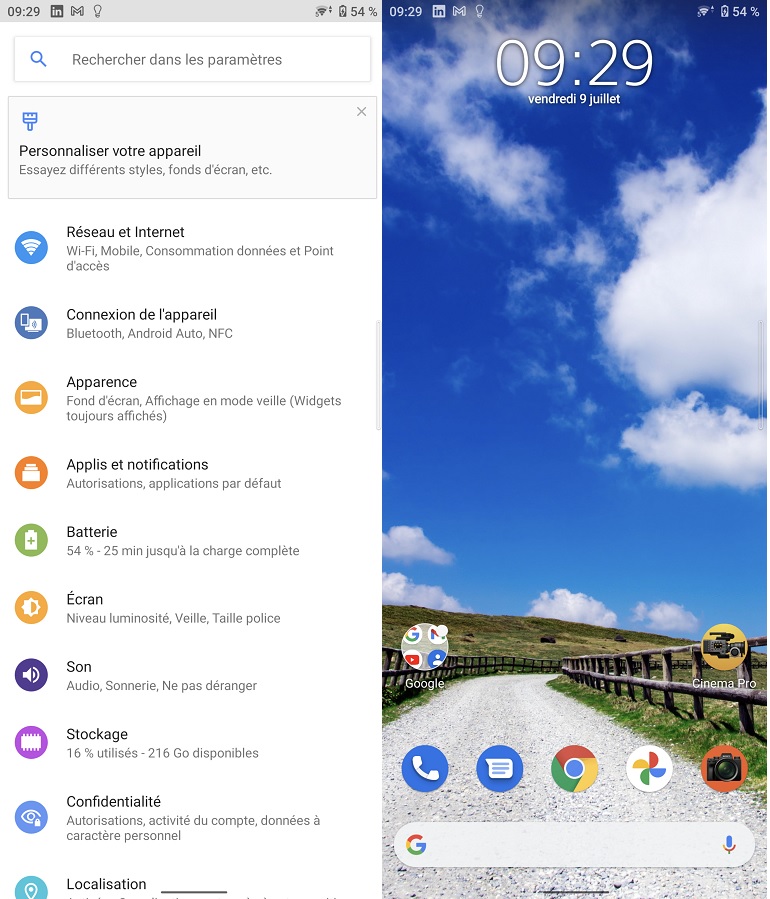 A point on the competition

The Galaxy S21 Ultra, iPhone 12 Pro Max, and Xiaomi Mi 11 Ultra are great smartphones. We can regret the very high positioning of the Xperia 1 III which allows itself to be more expensive than its competitors for similar services.

The Sony Xperia 1 III is positioned as an interesting tool for photography fans, amateur filmmakers and audiophiles. It manages to distinguish itself by bringing features that other manufacturers do not offer. However, its price remains very high and the autonomy is quite mediocre. Elements that detract from the experience.