Wave energy (or wave energy) corresponds to the energy contained in the movement of the swell. The World Energy Council has estimated at 10% the theoretical potential of the annual global demand for electricity, which can be covered by this energy. Several companies are showing great interest in this source, including Sea Wave Energy Ltd, a company based in Cyprus and the United Kingdom. The company recently introduced a new version of its wave energy technology: Waveline Magnet.

Sea Wave Energy Ltd (SWEL) has been working on the Waveline Magnet (WLM), a floating wave power plant, for over 10 years. This wave energy transducer consists of a long row of plastic floats that follow the movement of the water and are connected to a rigid central “backbone” by levers. The latter make movements from bottom to top along the waves, driving electric generators located in the central structure. Something like a long jointed snake swaying on the surface of the water …

“Used effectively, the oceans prove to be one of the greatest clean and sustainable energy reserves on Earth,” the company’s website says. Despite this potential, it is clear that the energy of waves and tides is not yet used on a large scale – the main difficulties are related to the durability and survivability of the proposed technologies. The device developed by SWEL, which is particularly reliable and efficient, may be a game changer.

Design that can produce up to 100 MW

WLM offers high performance, low cost and minimal maintenance. It can be used in any wave environment, regardless of wave height and weather conditions. When a wave first hits the structure, the system is aware of the size and speed of the wave, allowing it to fine-tune the power output on each generator as the wave travels along the line. Particularly difficult wave conditions do not negatively affect the operation of the device, but rather improve it – without risk for the installation, which perfectly follows the wave line.

Each float is connected to the central column by a lever that is actuated by the movement of the waves. © SVEL

The WLM has a low production cost from the outset due to the low mass of materials used – most of the device can also be made from recycled materials. In addition, it has very low water penetration, which ensures minimal impact on marine life.

After testing several prototypes in wave pools and offshore, SWEL says its device has shown “breakthrough results and potential”, adding that the WLM can efficiently harvest wave energy to produce electricity, desalinated water and/or hydrogen. According to its developers, one WLM can produce over 100 MW! The generated energy can be returned to land via cable or used directly by offshore power consumers. 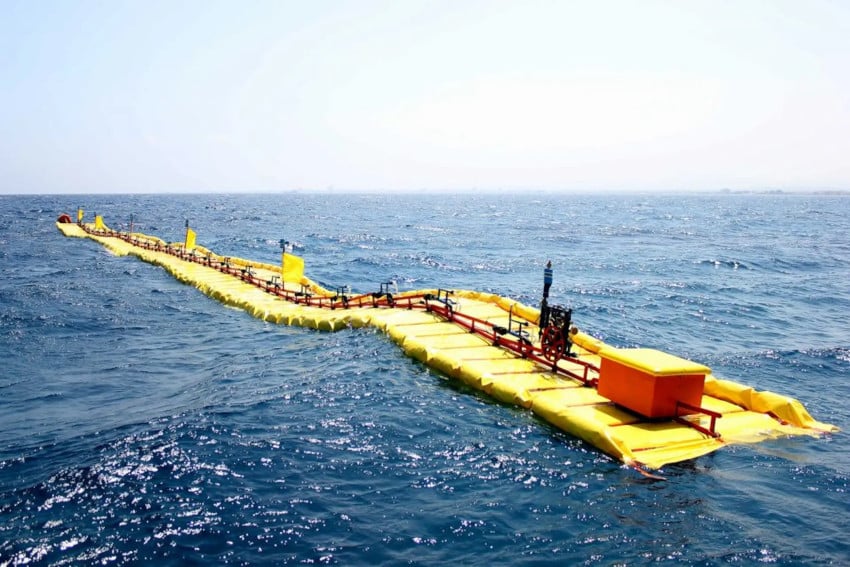 First trials of the prototype on the high seas © SWEL

“We can show how a utility-scale device using our technology will achieve a Levelized Cost of Energy (LCoE) of less than 1 Euro ($0.01)/kWh, exceeding the current wave energy industry benchmark of 85 Euro ($0.84) “. /kWh,” said Adam Zakeos, inventor of the technology and CEO of SWEL, in 2018. If this estimate of LCoE, which is the total cost of energy over the lifetime of the equipment that produces it, turns out to be correct, WLM will outperform all known energy generation systems, including those based on renewable energy sources.

The announcement, however, raises skepticism. The tests carried out in the pools of the Centrale Nantes in September 2020 have been successfully completed. For two weeks, the team tested a prototype there, 32 meters long and weighing about 1.8 tons: the device reached a maximum power output of 1.4 kW. Of course, the waves of this pool are not comparable to ocean waves, but one can still wonder about the size of a structure capable of producing 100 MW… 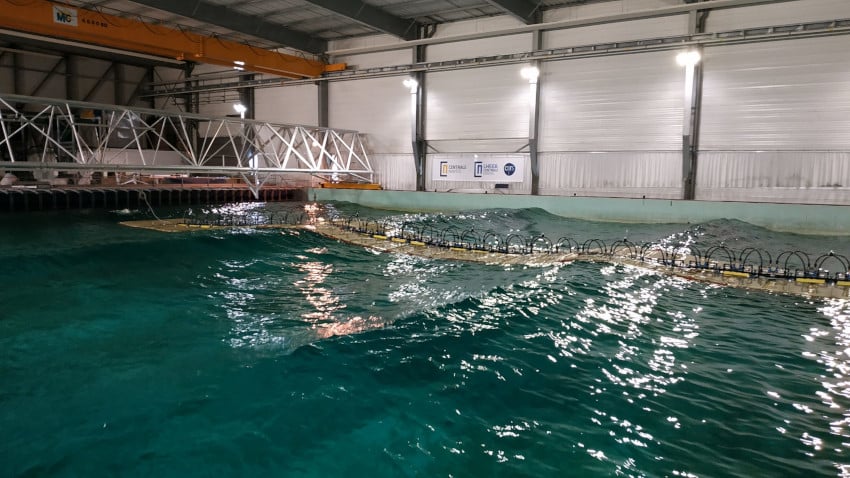 Testing a prototype 32 meters long in the pools of the Centrale Nantes in 2020. © SWEL

When it comes to installations several kilometers long, the question arises of the impact on shipping and on marine fauna. Will production costs be as low as expected? Similar initiatives have already been proposed: in 2014, Albatern Ltd also introduced floating and modular power generators, promising up to 100 MW for a network 1.25 km long and 24 meters deep. Today, this British company no longer exists.

Now SWEL says it is “ready to shake up the energy industry.” But despite these years of development, it has yet to conduct a series of tests on a pilot model in order to “project system loads and behavior effectively” and thus be able to consider marketing its invention. Therefore, the company is looking for alliances and strategic partnerships to put its WLM technology “at the forefront of renewable energy production.”

If it delivers on its promises, WLM could truly revolutionize the energy sector – especially in the current energy context – and make a significant contribution to the fight against global warming. But the fact that a company offering “the world’s most efficient and cheapest wave energy converter” (according to its website) is struggling to attract investors doesn’t bode well.