The SteelSeries Aerox 9 Wireless is lightweight and fast, and includes many customizable options for serious MMO/MOBA players. This is one of the best mice we’ve tested.

The SteelSeries Aerox 9 Wireless is a rare find among gaming mice as it has 18 programmable buttons and weighs just 89 grams. These two factors alone should please gamers, especially MOBA and MMO players who are looking for more buttons to deploy commands and macros. What’s more, the Aerox 9 Wireless backs this up with a fast 18,000 CPI sensor and dual Wi-Fi and Bluetooth connectivity.

The secret to the lightweight design is the honeycomb mesh cover that runs nearly the entire length of the mouse. Besides limiting weight, this design also gives the Aerox 9 Wireless a futuristic look and provides a great bird’s eye view of the vibrant RGB lighting inside.

The Aerox 9 Wireless is also extremely comfortable if you use the palm of your hand or your fingertip. If you prefer a claw grip, this mouse is probably not for you, as its accentuated top can be a little uncomfortable for your fingertips.

Upon opening the box, the first impression was that the mouse is quite large but has a minimalist profile. There are no fancy curves, wrinkles or bulges that you might see in other gaming mice.

The 18 buttons feel very finger-friendly. In addition to the two main ones at the top, there is a button that is easy to reach with your middle finger at the top center behind the mouse wheel. This button allows you to switch between five different CPI profiles that adjust mouse sensitivity levels.

The mouse wheel itself has three buttons in one, including the left and right tilt buttons, but the bulk of the buttons are a grid of 12 buttons located on the left side. This mesh is thumb-accessible and is tinted gray, which contrasts nicely with the mouse’s matte black aesthetic.

The upper mesh design of the Aerox 9 will be familiar to gamers who have used the similar design of the SteelSeries Aerox 5. If you haven’t, you’re forgiven for thinking it compromises functionality. This is simply not the case. Despite the many holes, the mouse is remarkably durable. The upper mesh didn’t move one iota when I tested it, maintaining its shape during intense gameplay. 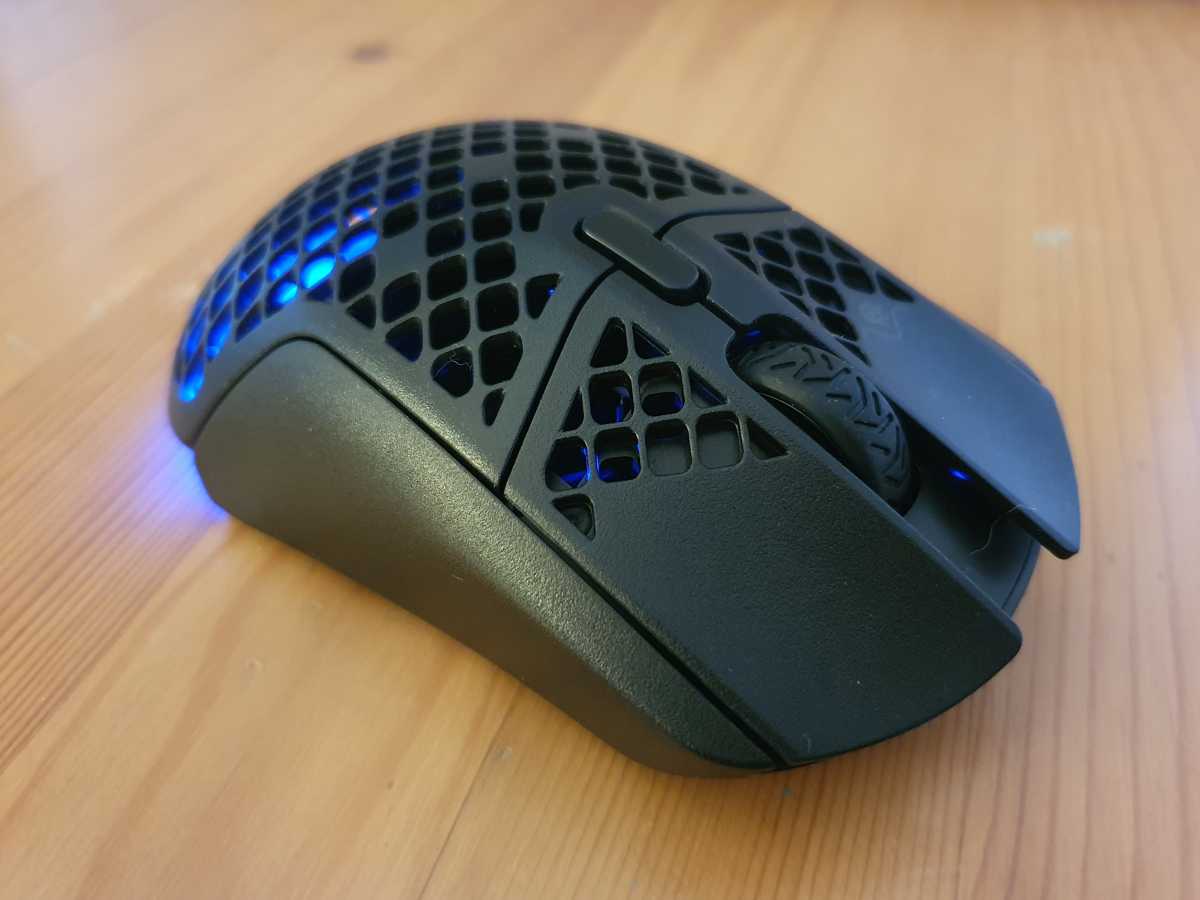 RBG lighting is also a winner. It’s built into the body of the mouse, but it’s just as impressive as mice with external RGB lighting. It is divided into three pyramidal zones that create dazzling effects as the light flickers around the mouse’s internal circuitry.

Being able to peek inside and see all these circuits was a little unnerving at first, as I often keep my coffee cup just inches from my mouse pad and worry a little about it spilling. But according to SteelSeries, the internal components are protected by an IP54-rated Aquabarrier, which helped put my mind at ease.

One of the amazing benefits of the unique open-top design was that my hand sweated less on hot days. With no hard piece of plastic underneath, the extra aeration proved to be very handy on long gaming sessions.

SteelSeries has equipped the Aerox 9 Wireless with their high-performance, proprietary TrueMove Air sensor with 18,000 CPI sensitivity, which includes 400 IPS tracking and 40G acceleration. Admittedly, it’s not as fast as the Razer Naga Pro’s 20,000 DPI optical sensor. However, it performed well in other competitive SteelSeries gaming mice and performed well in my tests.

After trying out the Aerox 9 Wireless in Call of Duty: Black Ops, it felt light and easy to use. The sensor had no problem keeping up with my quick hand movements, whether they were long or short. The mouse tracking also seemed very accurate, and pinpointing targets was a breeze. Also, the high-shaped, solid upper provided enough stability in my palm for when I needed to do repetitive motions.

The Aerox 9 slides smoothly across my desk with PTFE sliding skates on the underside. There are one each in the front and back, as well as one around the mouse sensor. They worked like a dream even when I didn’t use the mouse pad. 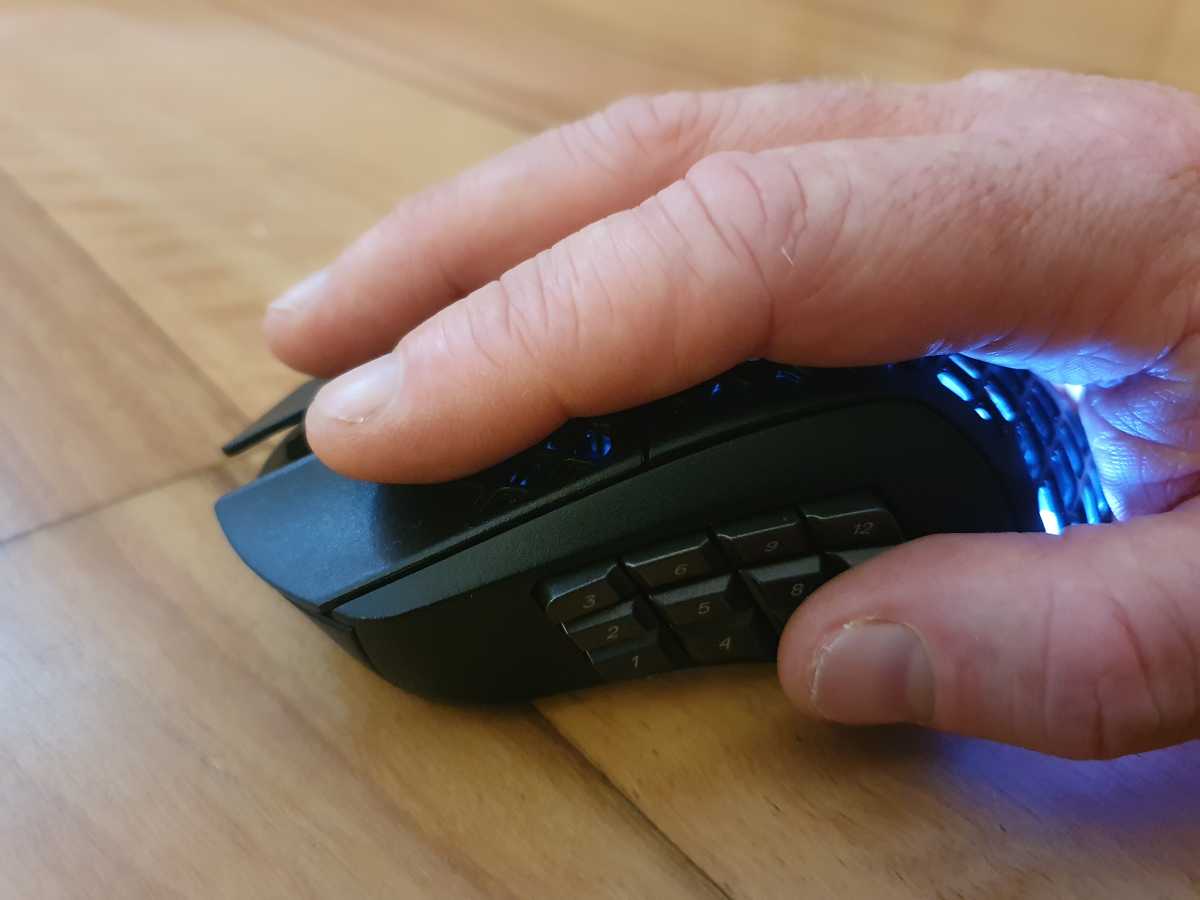 The main buttons were also comfortable. They have a contoured center that perfectly holds my fingers in a natural grip. However, they are not the widest of the buttons, and gamers with large fingers may prefer a bit more space.

While most premium gaming mice feature relatively fast switches, there can be slight differences in their response and durability. SteelSeries has given the Aerox 9 Golden Micro IP54 mechanical switches a durability rating of 80 million clicks, 10 million clicks more than the Razer Naga Pro. I found them soft and chewy. They also had minimal movement, which was perfect for games where I needed to tap quickly.

To test the side grid of buttons (no mechanical switches), I mapped commands in my old favorite MMORPG Gloria Victis. Overall, the grid was a pleasure to use and made my gameplay a lot easier. Most of the buttons were easy to find and respond to. However, I had to extend my thumb to reach buttons 3 and 6, despite SteelSeries neatly laying out the buttons in three well-defined lines. However, this has never been a major issue affecting my gameplay.

On the other hand, the grid buttons are pretty solid, so you’re unlikely to hit them by mistake when you don’t want to.

Aerox 9 dual connectivity includes both Bluetooth 5.0 and 2.4GHz wireless options. As a laptop reviewer, I found this feature incredibly useful for switching between laptops. I could leave the dongle plugged in for gaming on one setup and use Bluetooth while writing a review on another. However, you need to make sure your laptop has a USB-C port to connect the Wi-Fi dongle.

The SteelSeries Aerox 9 is rated for 150 hours of battery life, which is a decent amount of time that you won’t be in a hurry to plug it in every time you play. The caveat is that battery life is at its maximum when the RGB lighting is off, so expect it to drain much faster when the lighting is on.

If you usually spend time setting up a gaming mouse, do so. The Aerox 9 Wireless, with so many buttons, could be a game-changer in MMO/MOBA games where there are rarely enough of them. Conveniently, the 18 buttons can be assigned commands or macros at the SteelSeries GG application level, instead of fiddling with the control menu of each game. This will save you a lot of time.

For the Gloria Victis, I mapped out the commands for interaction, kick, map display, weapon tab/draw, and ally bandage, and I had many more buttons to program. It only took two minutes, but it changed my gameplay a lot. 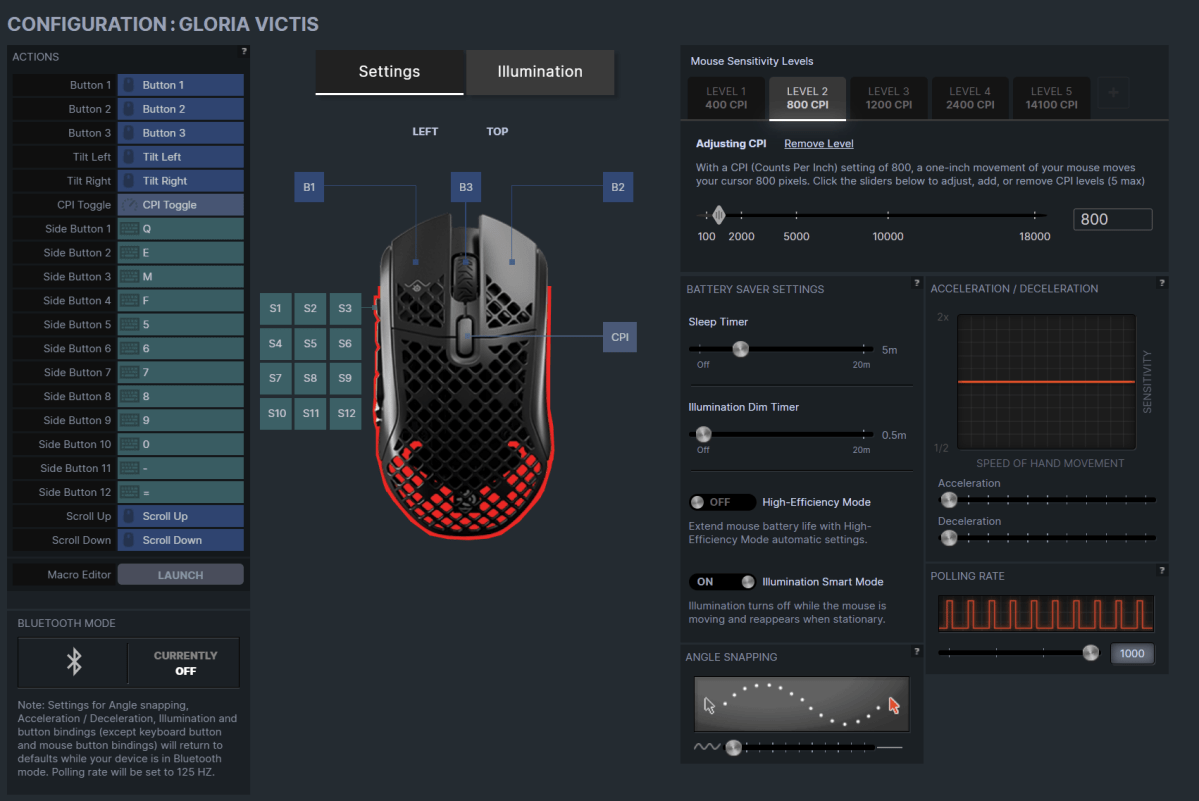 Here we see all the programming possibilities for displaying buttons on the Gloria Victis.

RGB lighting zones, mouse sensitivity and responsiveness can also be quickly changed in the SteelSeries GG. For mouse response speed, you can fine-tune and adjust the polling rate and mouse acceleration or deceleration to find the setting you want.

Once you’ve set everything up the way you want, you can simply save the profiles in the ‘config’ column on the left side of the app. Switching mouse profiles before gaming is as easy as clicking on the desired profile – it really couldn’t be easier.

SteelSeries Aerox 9 Wireless: Should You Buy?

The SteelSeries Aerox 9 Wireless is the original wireless gaming mouse with 18 programmable buttons and weighing only 89g. The mouse’s extensive button options, fast sensor, and dual connectivity should make it a very attractive mouse for both competitive and casual gamers, especially MMO players and MOBAs that can display commands and macros throughout the day. We cannot recommend it highly enough.