TOPICS DISCUSSED IN THIS MARKET REPORT:

European Stock Exchanges It pulled back at the start of the session on Thursday after mixed corporate results and the return of investor fears about Evergrande.

Fears of a default by Chinese giant Evergrande resurfaced after the heavily indebted real estate group announced the failure of a plan to sell most of the equity in a subsidiary, which reportedly earned around 2.2 billion euros.

The consequences of the Evergrande case could have unforeseen effects that would spread to the financial system and the economy, which could lead to a sharp drop in growth prospects.

In the United States, investors will read the Philadelphia Fed’s weekly jobless claims and October Manufacturing Index at 2:30 p.m. The September Leading Indicators Index and September Second-Hand Home Sales will be given to Meet at 4pm In the Eurozone, October Consumer Confidence will be released at 4pm

Wall Street near a new record

Wall Street ended in disarray on Wednesday as the Nasdaq tumbled as the Dow Jones and the S & P-500 approached their all-time highs as investors took comfort from the better-than-expected quarterly results released by companies. Americans.

The Dow Jones briefly broke its high in mid-August during the session, while the S & P-500 came within five points from its high in early September.

In early October, before the earnings season launched last week, the S & P-500 was 6% below its all-time high, easing amid concerns over supply chain bottlenecks, pressure on corporate margins and rising production costs.

In addition, after being carried away by the idea of ​​an anticipated monetary tightening, traders no longer have the same enthusiasm in a short-term rate hike.

Looking at the company’s first posts in the last ten days, investors are satisfied with how they are offsetting inflationary pressure and supply problems.

In its Beige Book survey, released Wednesday, the US Central Bank (Fed) noted that despite inflation, many companies reported a “greater propensity to pass on cost increases” to consumers.

The market is moving aimlessly after having benefited the day before the announcement of the Energy Information Agency (EIA) of the United States of a fall in the stocks of crude oil and gasoline in the United States. 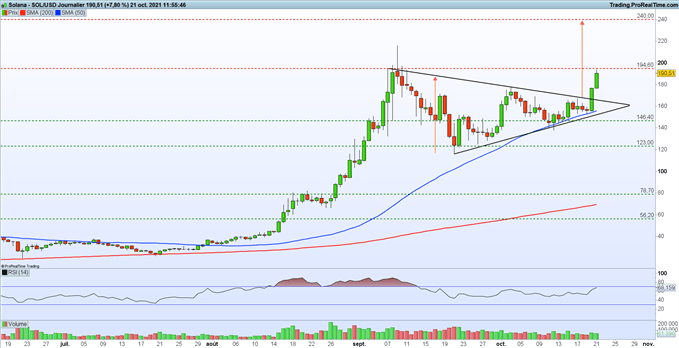 Solana takes off again after several weeks of consolidation in a symmetrical triangle. The exit from the top of this graphic figure advocates a new wave of ascent towards new all-time highs.

Prices will still need to break resistance around $ 195, but technical analysis suggests a theoretical target of around $ 240. Solana’s ecosystem is booming and cryptocurrencies continue to attract private investors.

The uptrend shows no signs of slowing down and the buying flow does not appear to be slowing down. As a result, Solana outperforms most Altcoins in 2021. We believe that the cryptocurrency should maintain this momentum and continue its rise in the coming weeks.

Whether you are a novice or experienced trader, DailyFX has many resources available to help you:

element within element. This is probably not what you intended to do! Instead, load your application’s JavaScript package inside the element.