But what use could be made of these almost perfect stone spheres, found in large numbers at various ancient sites in the Aegean and Mediterranean? During the 20th century, archaeologists discovered them in Crete, Cyprus, Santorini and other Greek islands, both inside buildings and in open spaces. Smaller than golf balls, these strange balls made from different types of stone have been the subject of much speculation. As to how they might have been used in the Bronze Age, some researchers sometimes define them as throwing balls, sling stones, parts of a counting system, or even game pawns.

746 spheres only in Akrotiri

With work combining classical statistical analysis and machine learning published in the Journal of Archaeological Science Reports, a team from the University of Bristol in the United Kingdom claims to have finally put an end to the suspense: these spheres will indeed be coins. one of the oldest board games of mankind, along with mehen (also called the snake game), senet or the game of dogs and jackals, the completely Egyptian or even the royal game of Ur (or the game of twenty squares) found in a royal tomb in a Mesopotamian city.

The researchers relied on the largest set of stone spheres collected to date, found only in the city of Akrotiri Thera on the Greek island of Santorini. Christian Fernie and Konstantinos Trimmis, from the Department of Anthropology and Archeology at the British University, studied the characteristics of 746 stones, their sizes, materials and therefore different colors.

“We used artificial intelligence to identify clusters in collections of spheres based on their size, that is, diameter and weight. This allowed them to be divided into two groups: a large group of small spheres and a small group of large spheres,” explains Science. and dr Avenir Christian Fernet. Combined with traditional analysis, artificial intelligence suggested that the stones may have been deliberately chosen or crafted to fit two main size groups. “It seems that some of them were sculpted in such a way as to become spherical and fit into certain dimensions,” says the researcher. If the smallest ones were found everywhere on the site, then the largest balls were found embedded in artificial cavities under the buildings of the last phase of settlement. 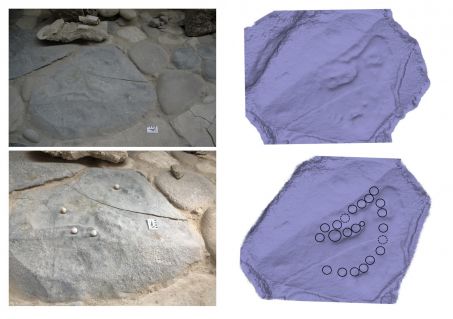 Slab with notches for spheres, also called kernos, found in the square of the House of Benches in Akrotiri, on the island of Santorini. How the balls are arranged is an interpretation. Credits: Christian Fernet / University of Bristol

The AI ​​also supported the theory that the spheres did indeed function as game pawns “because if they were used as part of a weighing or counting system – which so far has been among theories still in development – we expected them to be grouped into several other groups,” continues Christiane Fernet. For his part, Konstantinos Trimmis believes that “the social significance of the spheres, as evidenced by the way they are placed in certain cavities, supports the idea that they were part of a game that was played for ‘social interaction'”. understanding of social interaction in the Aegean region of the Bronze Age”.

Thus, small spherical stone objects could be reproduced on stone slabs with cuts and other depressions recently discovered in the eastern Mediterranean. “These types of slabs have been found in Crete, the Levant, Cyprus, Naxos and even Santorini,” the duo wrote. “The recording of the slabs, also known as cores at Akrotiri, showed that the function of an object was more important than its materiality.” Indeed, archaeologists have been unable to find patterns in the type of stones used, their color, or even their general shape. “The relatively flat slab, which can be pierced or engraved with cupules, seems to have done its job,” believes Christian Fernet. “The size of cupules varies from one plate to another, and the only real characteristic is the presence of a large mark and several smaller ones – probably 21 in total – arranged in a spiral or oval.” 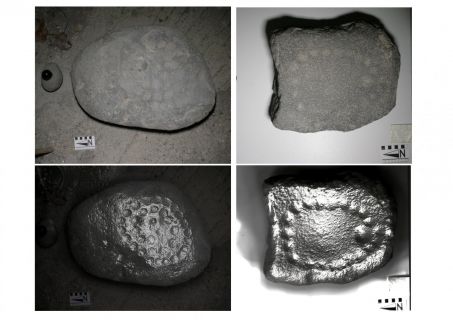 However, the reason why so many spheres were discovered in Akrotiri and nowhere else is unclear. One of the hypotheses put forward is that it could be related to culture: only the inhabitants of Akrotiri used stone spheres for games, while in other places small pawns were made from seeds, beans or dung balls, organic residues not resistant to destructive action. time. Another possibility offered to explain the lack of orbs in abundance elsewhere is the existence of an explorer bias that caused the stones to go unnoticed during the excavation process.

The next phase of the study will be to apply a similar methodology to plates, in particular in an attempt to relate them to spheres. The team also hopes to use artificial intelligence techniques to determine how the game was actually played. Because it still remains a real mystery: what were the rules?