General Abdel Fattah al-Burhan and members of the Sudanese armed forces shut down the country’s internet last week after announcing a coup on Monday. Prime Minister Abdallah Hamdok and several ministers were arrested when the Sudanese army took full control of the country.

Cloudflare and Netblocks reported last week that the internet was down in the country. Internet shutdowns have become the tactic of choice for repressive governments hoping to protect their actions from the outside world.

Netblocks and Cloudflare confirm that the internet in Sudan is still disrupted, leaving more than 43 million people without access to vital services or means of communication with the outside world.

Mobile phone service was briefly restored last Tuesday, allowing gruesome videos of the government’s attacks on protesters to appear, before being disrupted again. 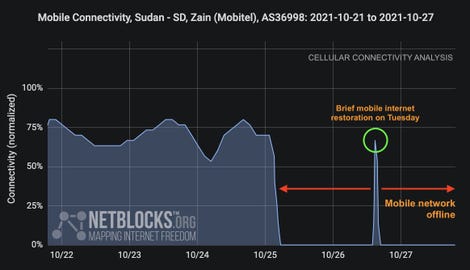 Netblocks explains that this “category of internet disruption affects connectivity at the network layer level and cannot always be bypassed by using VPN or bypass software.”

Celso Martinho, Cloudflare’s chief engineering officer, tells that shutting down the internet is less difficult than he might imagine.

It explains that the Internet is a network of networks and that, in the case of a country like Sudan, the networks are the Internet service providers, identified by their Autonomous System Numbers (ASN).

ASNs exchange traffic with each other, internally, and with external sources, such as ISPs in neighboring countries, transit providers, or other partners, which is also called peering.

“The government can order local ISPs to stop exchanging traffic with other entities outside the country. If the ISPs are running, all they need to do is stop advertising their routes outside of the Internet; Disabling the Internet is a simple configuration change, ”he explains.

“Citizens of countries that experience government-induced shutdowns tend to be creative and find ways to access the Internet from abroad through VPN or other platforms. However, in this case, we do not see HTTP traffic or any other type of traffic coming from Sudan. “

He adds that Cloudflare has worked with civil society and human rights groups to help them bring attention to internet shutdowns through Project Galileo and Cloudflare Radar.

“We believe that it is important that democratic countries challenge those who shut down the Internet and exert diplomatic pressure on them to restore what we believe to be basic human rights. “

Scott Carpenter, director of international policy and engagement at Jigsaw, tells that based on conversations with people in other regions, a sense of total paralysis, if not fear, sets in when the Internet is closed.

“People have no way of knowing if their loved ones are safe, for example,” he says.

The situation reminds you that Ethiopia has experienced a similar shutdown.

“One person we spoke to was afraid for his family in Tigray, especially his father, who was ill. In her own words, “For days I had nightmares. I couldn’t eat. I couldn’t work. I thought maybe she was gone.” In other cases, people were unable to receive adequate medical care because they did not have access to doctors from other communities, ”says Scott Carpenter.

Internet outages like the one in Sudan take different forms. Some are blackouts, while others take the form of chronic censorship, he says.

Shutting down one or two services can affect millions of people, and in many countries, “internet” is almost synonymous with one or two applications that people use to communicate online every day.

“Internet outages almost always include mobile networks and sometimes extend to cable lines, although they are more important for business users and are often somewhat isolated. In this case, it seems that there is a cut in the mobile networks and in most of the landlines, ”says Scott Carpenter.

“Countries have various means to implement the cuts. If they only have a handful of ISPs and mobile phone operators, they can simply ask them to shut down. In this case, operators have the option of reestablishing access for certain people, which can allow well-connected people to escape the lockdown. Other options are to install specialized equipment in each telco, as happened in Russia, or, the most brutal option, to implement cuts at the level of internet exchanges that connect the networks of a country with those of the outside. “ 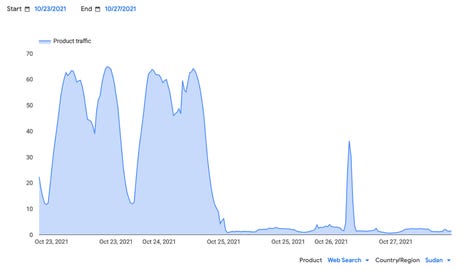 When asked what the Sudanese can do to get around the lockdown or what other people outside the country can do to help, Scott Carpenter and Celso Martinho explained that in the case of total closures like this, it is technically difficult to avoid the lockdown if your provider is a local ISP.

“It is unlikely that someone can help if the local ISPs are the ones that own the local internet infrastructure (fiber, cable, mobile networks) when they are ordered not to communicate with anyone outside the country,” explains Celso Martinho.

According to Scott Carpenter, the chances of avoiding internet outages vary considerably depending on the circumstances.

If there is a power outage and you don’t have specialized equipment, the only known options are to get a signal across the border or to use SMS-based tools like SMS. No Border, he said.

Either way, you will be using potentially expensive long distance or international services, and with SMS tools you have to prepare in advance. People with more resources may have a foreign SIM card that continues to work or telephone modems that they can use for long distance calls with a landline phone. Options such as satellite Internet are not yet widespread and should not be expected to solve the problem, ”warns Scott Carpenter.

“While the shutdown only affects certain services, there are specific censorship tools like nthLink, BeePass, Lantern, Outline, and Psiphon that can continue to work for people with a full plan. Many mainstream VPN services are not designed to escape censorship, but others, such as Tunnelbear, have implemented bypass technology and provide some free access in countries experiencing shutdowns. Regardless of which tool is used, people who prepare in advance are in a better position, as there are times when access to app stores is interrupted. “

He urges people living outside of Sudan to speak out about the internet shutdown and believes that governments should try to help by providing reliable information on what tools work and supporting more tools to provide free access.

“For individuals, Outline provides a way for people abroad to establish and share censorship-resistant private access with their friends and family at home. In places where blackouts are frequent, providing journalists and community advocates with foreign SIM cards in advance can help them stay connected and receive news outside the country, ”says Carpenter.

Netblocks notes that the Sudanese authorities have already blocked social media for 68 consecutive days to end the protests. Facebook, Twitter, Instagram and WhatsApp were restricted from December 21, 2018 to February 26, 2019, the longest network outage recorded in the country.

Another mobile internet shutdown took place from June 3 to July 9, 2019.

The 15-member UN Security Council issued a statement on Friday, calling for an end to the coup and the restoration of the country’s civilian rule.