While the 2020 VOD market has grown by 35.1%, January 2021 is starting at a much slower pace. Indeed, the first month of the year shows growth of 14.9% for a turnover of 125.2 million euros, against 109 million euros in January 2020. According to information communicated by the CNC , SVOD continues to dominate the market: it represents 87.7% of revenue for the month, or the equivalent of nearly 110 million euros, up 25.9% compared to 2020. The SVOD market benefits both from a strong programming dynamic on the part of the main streamers, but also from the slowdown in TVOD and EST uploads, which have been greatly impacted by the closing of theaters and the producers’ choices not to release directly on VOD. As a result, TVOD and EST are losing ground: TVOD is down 11.8% and EST is losing 20.6% and achieving around 15 million euros in revenue in January.

The SVOD still attracts as much Internet users since 27.3% of them (14 million) declare to have viewed a program in SVOD, that is to say +6.7 points compared to January 2020. The CNC specifies that they are 5.8 million use SVOD daily. The hierarchy of platforms has not changed: 68.8% of VOD consumers say they have watched a program on Netflix, 26.9% on Amazon Prime Video and 20% on Disney +. 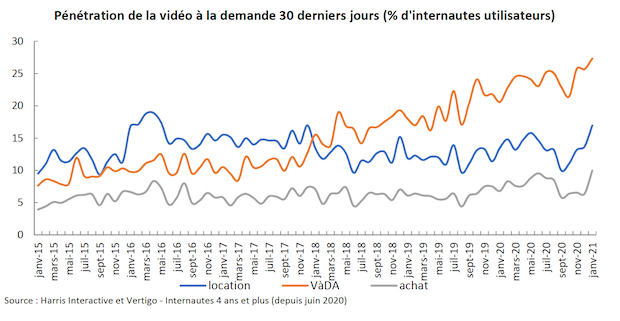 As the pay market continues to grow, as new offerings emerge, as the TVOD market anxiously awaits theaters to reopen and start to rise again, more and more AVOD services are being launched to the conquest of Internet users. Given the animation that reigns on the American market, it is obvious that this market segment will explode in the coming months, it would be wise for the CNC to add it to its barometer in order to assess both its value. and size.