At the end of October, Tesla’s capitalization shot up to the $1 billion mark. And, since then, it has remained above. This is 3.5 times that of Toyota, number one in the world, 7.5 times that of Volkswagen, number two, and more than 100 times the value of Renault on the stock market, although the French manufacturer sells more than double of cars per year. year. The enthusiasm of the financial markets for Tesla, whose value has increased twelvefold in two years, is mystical. And no matter what may frustrate that blind faith. However, the alerts are numerous: the brand of stars and fashion fools has received repeated warnings from the US agency in charge of road safety, after numerous accidents with emergency braking or its Autopilot semi-autonomous driving system. The fatal accident in Paris, in mid-December, of a G7 taxi whose driver lost control of his Tesla 3 adds to the controversy. And this, not to mention the dissatisfaction of American customers with the reliability of models, in surveys by JD Power and Consumer Reports. “However, a broken car can cause much more damage than a broken iPhone,” emphasizes Matthias Schmidt. And this German consultant, who has created his own firm, insists: “The world of the car is more complex than the world of smartphones with which many like to compare Tesla.”

But Elon Musk and his fans just want to see the undeniable success of a label created in 2003 to produce electric sports cars in very small series at the time. Since 2012, the end of craftsmanship has been replaced by the series with the Model S limousine, accompanied by its SUV derivative, the Model X, marketed in 2015. These two models have allowed the Californian brand to become known throughout the world. world. For the first time, a zero-emission car offered a range capable of coping with long journeys. Above all, this unprecedented range of action was supported by Superchargers, stations covering the United States, Europe and China equipped with electrical terminals that allow the car to be charged in about an hour. Better, in 2017, the Tesla Model 3 democratizes the market with a sale price starting at 43,800 euros. “The big manufacturers will hit the same niche hard for less. And that’s where it’s going to be tough for Tesla.” Didier Leroy, former vice president of Toyota.

Producing in large series was a difficult challenge. But, in 2020, Tesla surpassed the 500,000-car sales milestone for the first time, approaching one million a year later, despite the pandemic and the semiconductor crisis. The manufacturer has one clear advantage in particular, namely “its IT development capabilities,” according to analyst Trip Chowdhry of Global Equities Research.

After losing a whopping 4.5 billion dollars between 2016 and 2019, the high-tech firm managed to finally generate a net profit of 721 million in 2020, for a turnover of 31 billion. By starting production in a factory in China. Snub Supreme: In September, the Model 3 achieved the incredible feat of becoming Europe’s best-selling car, ahead of the Renault Clio. A performance certainly achieved in a single month. Prevents. And here is its derivative, the Model Y, imported from Shanghai. Still a megalomaniac, Elon Musk predicts that this new SUV will become the best-selling car in the world.

However, the road is getting more and more complicated for the champion of the electric car. “The big manufacturers will hit the same niche hard for less. And there it will be difficult for Tesla, ”estimates Didier Leroy, former vice president of Toyota. In fact, the German groups Volkswagen, Daimler, BMW and the Korean Hyundai are launching direct competitors of Tesla, with unrivaled know-how in mass production. “Mercedes now technically rivals Tesla in terms of autonomy and consumption, Hyundai in terms of recharging time,” notes a French expert. It is true that Tesla invests proportionally more than BMW or Volkswagen in electrification (and autonomous driving) per car sold, according to a study by AlixPartners. But the lump sums are necessarily less, given the respective size of the companies.

Tesla also suffered setbacks. The launch of the electric truck, whose rivals dispute relevance given the weight of the batteries to move everything, has been postponed. Elon Musk also confirmed in July 2021 the postponement of the production launch of the Cybertruck, his angular-style pickup truck. Which gives Ford time to grill it with the electric version of its famous F pick-up, launched in the spring of 2022. The start-up of Tesla’s Berlin factory is also experiencing significant delays. The controversial prior authorization procedure, which allowed it to start work in 2019, has not yet resulted in a final approval, the authorities are still evaluating the impact of the plant on the local environment.

read alsoWhat if the electric car were an ecological disaster?

Precisely, Tesla electric cars are increasingly questioned at the same level of ecology. Because they are very heavy, up to 2.5 tons. “The manufacturing and end-of-life cycle is equivalent to 12 tons of CO2, compared to 5 tons for the equivalent thermal, gasoline or diesel models,” says Guillaume Devauchelle, former director of innovation at Valeo. Therefore, the production is terribly energy intensive. And the very constitution of the vehicle poses a problem. “On a 1.25-tonne vehicle, there are already 543 kilos of steel, 173 of aluminum, 159 of plastic, 80 of rubber on average,” details the Automotive Platform, which brings together industrialists from the sector in France. For a vehicle twice as heavy, you obviously need a lot more! Also, a heavier vehicle.

“Use, in principle, more of its tires,” adds Florent Menegaux, president of Michelin. Finally, very large Tesla batteries require copper, nickel, and cobalt. “That is the big problem, because its extraction is very polluting”, recalls Guillaume Devauchelle.

And on the way? The results aren’t terrible either. Because a Tesla S with 600 kilos of batteries will consume a lot of energy… to transport those batteries. “Such an electric model for long trips is not at all virtuous,” says even the head of R&D of a major equipment manufacturer. But, for the moment, politicians do not care about these pitfalls. The will of the States, in particular in Europe, to ban thermal engines in 2035 opens a boulevard for Tesla. Wait for hydrogen vehicles to compete with battery-powered models… But that won’t be before the end of the decade. Tesla’s stock price isn’t done skyrocketing. 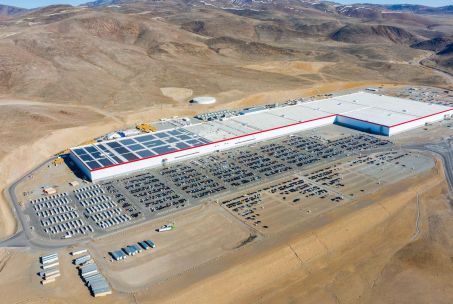 Tesla Gigafactory in Sparks, Nevada. Producing in large series was a tough challenge for Elon Musk’s firm, which was close to a million cars in 2021. But now Volkswagen, Daimler, BMW and Hyundai are launching direct competitors, with unrivaled know-how in mass production.