According to reports released by Elon Musk’s company, 75% of the company’s BTC was due to be sold during the 2nd quarter of the year.

As the cryptosphere slowly got back on track, here are some news that should shake up the industry. It is said that Elon Musk, an ardent bitcoin supporter, sold 75% of his bitcoin holdings through his company. The Tesla-related news has already generated a flurry of reactions, a surprise announcement to say the least.

Indeed, like Michael Saylor and MicroStrategy, who would be willing to hold on to their bitcoins at all costs, there was a similar image in the cryptosphere of Elon Musk and Tesla, and the billionaire is an industry figurehead close to several projects (Bitcoin, Dogecoin and Shiba Inu).

BREAKING: Tesla, TSLA earnings reports show they sold 75% of their $936 million worth of bitcoin.

According to Tesla’s Q2 report, nearly 75% of bitcoin was traded for FIAT currency, bringing the company’s economic balance sheet to $936 million. The average selling price will be above $29,000 per bitcoin. After that, Tesla will only have about $218 million in crypto at the end of the second quarter (end of June), according to the information provided in its report.

As a reminder, in February 2021, the car company acquired $1.5 billion worth of bitcoin and largely helped propel the asset to very high peaks from ATH in April of that year around $69,000. The company had 42,000 BTC and was therefore a benchmark, especially among companies, being one of the companies with the most Bitcoin tokens.

In response to this announcement, synonymous with a real earthquake, Bitcoin briefly fell below $23,000 before recovering somewhat and stabilizing around $23,400 for now. 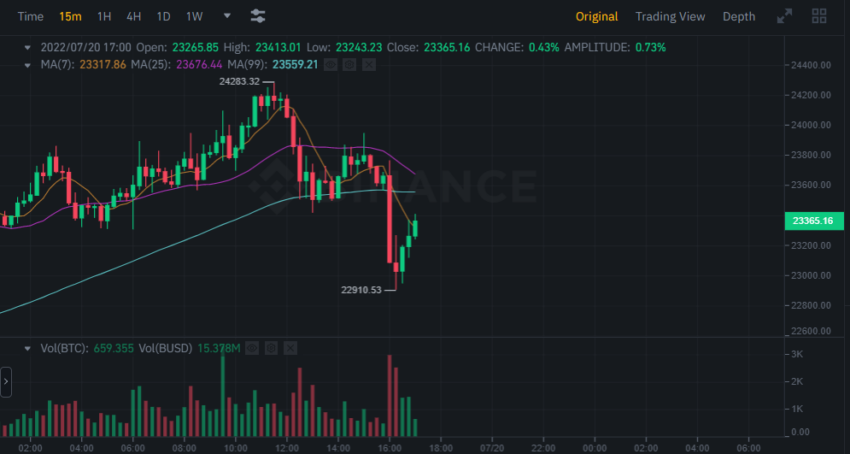 As bitcoin seeks to initiate and sustain an uptrend, this news could very well have the opposite effect and send the asset and other cryptocurrencies lower.

The selling, which is likely to be fueled by Musk’s negative attitude towards the economy that Musk has previously expressed, will be closely watched as it could signal a new trend in the market. It also remains to be seen how the market will digest the news over the next few days.