Nearly a year after its release on PS5 and PC, Deathloop is coming to the Xbox Series.

Year. This is the time when Xbox players will have to wait to finally get their hands on Deathloop, the latest Arkane (Dishonored) game for which Sony has signed an exclusive one-year deal. The context was a bit special: Arkane and its parent company Bethesda were actually acquired by Microsoft. So releasing a PS5 exclusive by one of their studios was something of a challenge… Deprived of being able to announce the arrival of Deathloop on their console, Microsoft nonetheless went above and beyond for their release, giving us a polished version of the game on the first day of the subscription. gamepass.

The art direction of the game is to die.

Deathloop puts us in the shoes of Colt Van, a man stuck in a time loop on Blackreef Island. As soon as he dies, he returns to this magnificent beach, illuminated by the sunrise, and finds himself without the weapons he was able to collect during his journey. To escape the island and this “endless day”, Colt will have to kill eight Fantasies present on the island in one day, including Yegor Serling, Dr. Wenji Evans, or Julianne Blake. This will be Colt’s main threat, as she will constantly hunt him down and unite all the Eternalists (the island’s guards) against him. Colt also forged a special relationship with Julianne, which we’ll get to know over the course of a few hours of play. On several occasions, Colt exchanges a few words with his best enemy, and these conversations are a real pleasure.

The plot may be far-fetched, but it fits perfectly with what Arkane taught us to do with Dishonored. Very special, the story lives on throughout the title and its great art direction. All over the island we find an atmosphere created in the best possible way. Updaam, for example, such a city located on Blackreef, has a very typical 60s-inspired atmosphere with its share of colors and over-the-top signs. There are admittedly only four maps, but they are all brilliantly designed and we have a lot of fun tracing them through every playthrough. The decorations are great.

Unsurprisingly, the artistic direction is enhanced by a very high-quality soundtrack. The melodies, on the one hand, are superbly composed and fit perfectly with the atmosphere and design of the title. On the other hand, the dubbing is impeccable. Arkane Studios offered a high quality VF dub and it’s clear, whether it’s Colt, Julianna or one of the Visionaries, that the French voices are of a very high standard.

In terms of gameplay, it’s hard for an FPS to do better based on the concept of a time loop. As such, the gunfights are incredibly accurate and terribly jittery. There are always two approaches before entering combat. Hide and avoid combat as much as possible with stealth kills, or move in and shoot any Eternalists that get in your way. Let’s be honest, we’ve only prioritized stealth a few times, that’s how much we enjoy firing Deathloop weapons. The shooting feel is incredibly good and hard to fault. However, one thing is for sure: before each attack, it is highly recommended to analyze the battlefield and the enemy forces present. You will be able to observe the Eternalists present and know their strengths and weaknesses, as well as the rounds they play. Unfortunately, we regret that there is some uncertainty in the system.

We also regret that the AI ​​is underdeveloped and doesn’t end up being such a big problem. Like stormtroopers, the Eternalists aren’t very good at aiming and rarely hit us. If they sometimes damage us, it is too rare that our enemies kill us and bring us back to the morning. Only the Seers manage to kill us, and even then only a few times.

Deathloop skillfully mixes several genres. So an FPS with its very successful shootout and rogue-lite phases. Indeed, you risk losing your entire arsenal with each of your deaths. A concept that may seem disappointing at first glance, but turns out to be carefully thought out and thought out. At the very beginning of the game, you will acquire the ability to accumulate and control Residuum. This essential resource in Deathloop will allow you to “save” your hard-earned arsenal and therefore not lose it between each loop. Otherwise, you would end up on the same beach every morning, and you would have to start from scratch and without any weapons. 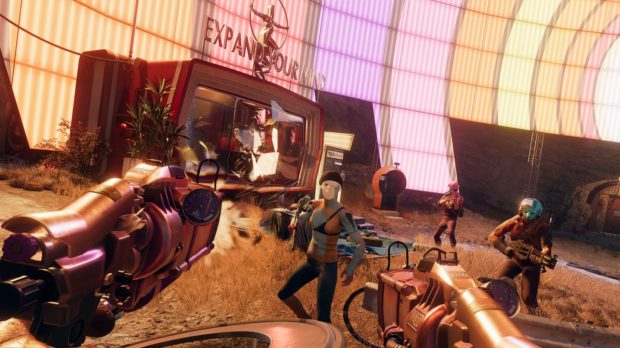 While not revolutionizing gameplay, Arkane uses Dualsense quite cleverly. Adaptive triggers resist a bit when you fire, but become a lot harder to pull when your weapon jams.

Weapons are thankfully not the only items you can acquire to counter your enemies. This way you will get the right to a grenade that can be transformed into a decoy or a laser mine, as well as amulets. These small objects, also visible due to their aura, will greatly enhance the Colt’s abilities. From the very beginning, the collected amulet allows our hero to make a double jump. Later, other amulets will improve Colt’s health as well as his resistance to bullets. Enchantments can also be assigned to weapons to reduce their recoil or improve their firepower. Amulets can also be lost between each loop. This is why Residuum remains your best ally and you should try to accumulate as much as possible. Fortunately, many household items (tires, bottles, canisters, etc.) have a high concentration of residue, which allows them to be trapped.

If Residuum is the key element of the loop, we must not forget the main objective of your quest: killing the Visionaries. To do this, you will have to distribute your kills over the four periods of the day (morning, afternoon, afternoon and evening). Going on expeditions will give you a lot of information about the habits of your targets. Such an antagonist, for example, likes to be in a certain place at a certain time of day. 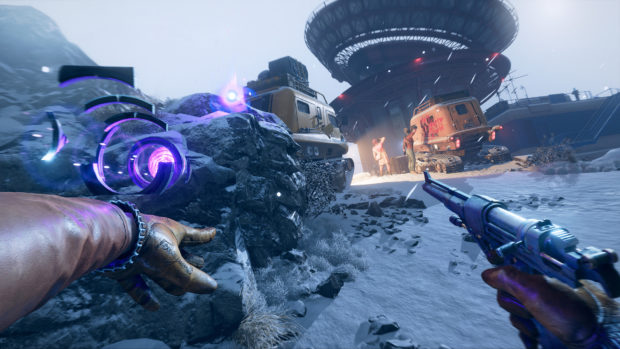 In Deathloop, we are swimming in complete science fiction.

With the same success, you can say right away: you definitely won’t be able to kill eight seers in the first run. Thus, it will be necessary to know when to go to a place to kill someone, knowing that with each map change you move forward during the day. Once the evening is over, you will return to the beach and start over. Therefore, it will be necessary to die or, in any case, end the day many times in order to finally find the winning formula and kill all the Seers in one day. Fortunately, the information recovered for your kills is not lost between each death. However, we will blame the developers of Arkane for neglecting the clarity of the menu where we plan our days. The information is poorly organized and the way we can choose our target is not really clear.

The clever creation of Arkane is the consequences of your actions on the maps. If, for example, the festivities in Apdaam are canceled in the morning with explosions and serial attacks, then in the afternoon you will find stigmata. Like the butterfly effect, every action has its consequences. Security will also be increased in a location devastated by one of your attacks.

The upside of this late Xbox Series port is that it offers Xbox players the best possible gaming experience since release. Which was not on PC and PS5 as there were a lot of bugs. Since then, most of them have been fixed. Many minor new features have also been added, including new weapons, skills, and enemies. Moreover, the developers have even taken the liberty of adding an extended ending and a photo mode that will immortalize the magnificent landscapes of the game. Finally, there is crossplay. You’ll find Arkane doesn’t miss a port, and it’s a real treat to discover his latest creation on Xbox if you missed it!

A year after PS5, it’s the Xbox Series’ turn to finally welcome Deathloop, the atypical FPS from Arkane Studios. If we were afraid that the concept of a time loop was redundant, the developers managed to beautifully implement all this in the gameplay and thus avoid repeating looped sequences. With its well thought out scenario in which we unlock new fragments during each playthrough, its unique concept which consists of a race to kill 8 Visionaries of Blackreef and its universe full of charm, Deathloop is a title that celebrates spirits. The island and its four maps that you will explore in a delightful setting from the 60s. As for the gameplay, the game is very nervous in its shootouts. However, we regret that the main enemies are not a real problem, with the exception of the Seers, the great antagonists of the title and much more accurate in their shots. In passing, it should be noted that the name also includes a tactical dimension. It is highly recommended to analyze the battlefield before launch. The recognition system was created to give you an idea of ​​what awaits you. With its superb artwork and high quality soundtrack, Deathloop is also enticing in terms of its production. This is one of the first games of the new generation and it does not disappoint. Some of the scenery is just amazing. This Xbox port has benefited from the latest updates and some nice content additions. If you missed it on PS5, you have no more excuses!

AI that is disappointing