Like a Dragon Ishin (Yakuza Ishin in Japan) on PlayStation 5, PlayStation 4, Xbox Series X | S, Xbox One, PC is scheduled for release on February 22, 2023. A trial version (PS5) of the game was made at the Sega/Atlus booth at Tokyo Game Show 2022 by our friends at Famitsu, let’s see the details.

Released on PS4 and PS3 in 2014, Like a Dragon Ishin features disturbing stories and action-packed battles set in the Yakuza universe. The game takes place at the end of the Tokugawa period. The protagonist, Ryoma Sakamoto, disguises himself as Hajime Saito to avenge his murdered teacher and infiltrates the Shinsengumi, an influential and powerful group of assassins.

The main feature of the game is that the popular “Yakuza” characters are present in the game as members of the Shinsengumi, as well as other heroes from the late Edo period.

This remake has been completely redesigned. Not only the graphics have changed, but the combat system has become more exciting, and new mini-games have been added. In addition, characters from works in the series released since then will also appear as new sidekicks.

Famitsu : “In this trial, you could play both day and night mode. In day mode, you can explore the city of Kyoto, and in night mode, you can follow the battle with Izo Okada*. a chance to play both, so let’s watch a 30 minute gameplay video and highlight the elements.”

* Okada Izo was one of the four Hitokiri Bakumatsu, an assassination group active in Japan in the 1860s, towards the end of the Tokugawa shogunate.

Famitsu : “Day mode starts with a scene where Ryoma Sakamoto joins the Shinsengumi as Hajime Saito. In this remake, the graphics are improved with Unreal Engine technology, but at first glance, I felt that the texture of the skin became more realistic, and the details of the buildings and the cityscape became clearer. New characters appeared among the members of the Shinsengumi, such as Takeda Kanryusai, played by Riki Takeuchi, and Itō Kashitaro, played by Hitoshi Ozawa.”

Famitsu : “Walking around Kyoto during the day, you will chase the thief and engage in combat with him. The combat system gives you the ability to switch between four fighting styles (sword, pistol, sword and pistol, martial art). The action is really powerful and gives a good feeling of impact.” 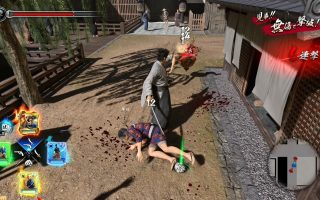 Read also: Trial of the Voice of the Cards: Creatures of Torment, and to say that these are just cards …

Famitsu : “Then we played in night mode. As I explained earlier, I could fight in this mode as I please, so here are the novelties of the title in terms of fights. In this remake, the soldier skills possessed by members of the Shinsengumi can be used anywhere, even outside of the dungeons. You can attach 4 hero cards for each fighting style. Each card has a corporeal ability that activates when it comes to corporal leader and a corporeal ability that can be used simply by adding it to the formation. Soldier skills have various effects, such as boosting an attack, healing oneself, or delivering a powerful blow to an opponent.

Famitsu : “You can say that the strategy is much more present, because the options available during the fights are more numerous. You’ll have to choose your gear cards carefully to find the perfect synergy during fights.”

To learn more about this game or this license, you can also follow this link!

React to our articles on Twitter with the hashtag #jrpgfr!

If you’d like to join the writing team, apply here!

JRPG enthusiast since 2010 and I hope one day this obscure genre will go beyond our borders.