Between August 2021 and May 2022, many financial giants have invested in crypto-blockchain. And they didn’t go there with the back of a spoon. (Click on the image below to enlarge it)

By looking at the details of the investments made, we can examine the total funding amounts of the funding rounds they have participated in. Based on this, active investors in the largest funding rounds are Morgan Stanley ($1,100 million in 2 rounds), Goldman Sachs ($698 million in 5 rounds), BNY Mellon ($690 million in 3 rounds), Commonwealth Bank of Australia (421 million dollars). . for 4 rounds) and Citigroup ($215 million for 6 rounds).

Between August 2021 and May 2022, 61 banks invested at least once in the crypto-blockchain space. Thus, the gradual attraction of new institutional investors suggests stable long-term prospects for the Web3 ecosystem and should potentially lead to increased participation of the banking sector in upcoming funding related to blockchain objects. I will not fail to share with you the next publications about participation in the rounds of these financial institutions.

In which industries do these banks invest the most?

Custody solutions and blockchain technology providers are growing in popularity among major banks, with some of them raising the largest funding rounds since August 2021. These include: NYDIG ($1 billion), Fireblocks ($550 million), Gemini ($400 million), and Anchorage Digital ($350 million).

This is not surprising as the market capitalization of cryptocurrencies reached an all-time high in November 2021, which led to an increase in demand and the number of digital assets held by custodial providers. Between 2019 and early 2022, assets in custody (AUC) increased by just under 700%. 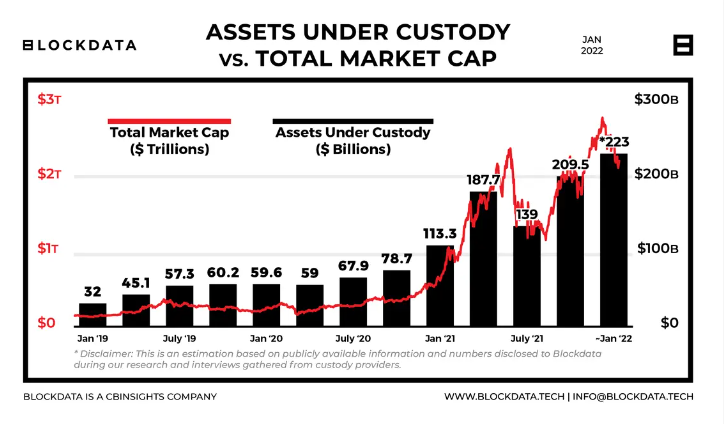