If you are wondering when the cryptocurrency market will emerge from the high volatility period, the correct answer probably never is. Well, at least not in the foreseeable future. Thursday, September 29, started for the first cryptocurrency with a slight increase, even if the price of the latter was drastically corrected afterwards. Bitcoin then started this last day of the month with a new pump. At the time of writing this review, the asset is trading around the $ 43,500 level reached just minutes after the chart above was completed.

If we study the Bitcoin chart more locally, we can see that the cryptocurrency continues to move within a descending price channel. However, it should be noted that assets have not recently fallen below $ 40,000 and have not set new local lows. On the contrary, Bitcoin is gradually approaching the upper limit of the price channel. All of these factors suggest that buyers have almost built up enough force to drive the asset’s price up. At this point, only negative news could affect the asset’s price and trigger a correction. Unfortunately, such an eventuality is more than likely.

The cryptocurrency market is awaiting the decision of the US Congress on raising the ceiling of the US public debt. If senators decide not to raise this ceiling, the panic will cause a series of liquidations and falls. in traditional financial markets, which will also affect the crypto asset market. However, it is well known that the US authorities have already chosen new debts instead of default on several occasions. Thus, if we do not take into account the confrontation between Democrats and Republicans, we can assume that the decision that will be made will not be surprising. However, it is worth following the evolution of events because the entire global financial system runs the risk of drastically changing if the ceiling is not raised.

At the same time, general support for the US dollar is increasing. This can be seen in particular by looking at the recent rise in the US Dollar Index (DXY) which is sure to have a negative impact on the dynamics of financial markets, as well as the price of gold. This indicates that households are beginning to prefer the US dollar to financial assets and precious metals, even though the country that issues that currency is on the verge of default. This means that many investors expect an imminent crash in financial markets.

Another factor that can affect the dynamics of the crypto market is the situation around Chinese real estate developer Evergrande. The financial health of the group in question is still in doubt because it recently missed the deadline for paying coupons and repaying its bonds.

True, Evergrande will have to sell its stake in Shengjing Bank for $ 1.5 billion in order to pay off debts that are due soon. The total debt of the real estate developer, however, exceeds $ 300 billion and the Chinese authorities do not seem to want to deal with this problem. Instead of nationalizing the group, Beijing has preferred to force other Chinese companies to buy shares in Evergrande, led if that will cause them losses. The extent of the power that the Chinese governor has in his country remains incredible. It is true that the situation has stabilized relatively recently, but the Evergrande crisis is far from over and its impact on financial markets, including cryptocurrencies, is yet to be discovered.

However, the media coverage of cryptocurrencies is not entirely negative: In his recent speech, Gary Gensler, director of the United States Securities and Exchange Commission (SEC), announced that his institution has begun considering launch applications. ) consisting of futures contracts related to the dynamics of Bitcoin. Gary Gensler justifies the SEC’s time to resolve this issue for the risk that the regulator will simply be overwhelmed by similar lawsuits in the event of a favorable resolution, which could lead to market manipulation. One thing is for sure: launching ETFs in such a way could seriously boost the morale of buyers who have lost faith in the crypto market, as it would pave the way for volumes from institutional investors who were unable to enter that market earlier. . One can only hope that the proposals will be considered as soon as possible and that the demand for these products by investors is not exaggerated.

Finally, the latest news yesterday refers to the fight of the Chinese authorities against private companies whose activity is linked to cryptocurrencies. This is the decision of the “decentralized wallet” imToken to prevent Chinese residents from accessing decentralized exchanges (DEX) and DeFi. This fact is indicative since a service that positioned itself as “decentralized” finally decided to restrict the freedom of its users.

The current move fits perfectly into the general uptrend. The price actually varies within the triangle, one of whose important elements is the figure on the chart called “falling wedge” or “falling wedge” in English. The price drop does not contradict it, but rather complements it because one of the key elements of this figure is accumulation. The latter occurs when the price changes between the upper limit (resistance level) and the lower limit (support level) of the price channel that narrows over time. This explains why we talk about the triangle: instead of two parallel lines that will never cross, we can observe two channel boundaries (also represented by lines) that move in the same direction, but will cross at the end of a moment. due to its nature.

However, the overall trend for Bitcoin has not changed. The asset is still in the accumulation stage and in the event of a further drop, Bitcoin will find several key levels capable of making the price rebound. The first is the $ 45,000 level that has become a support level. The second level is $ 40,000: in fact, it is a significant level of psychological support. The third is the $ 35,000 level that represents the lower bound of the triangle shown in the chart above. The fourth level is around $ 30,000, at the upper bound of the expanding descending price channel (shown graphically in yellow). Finally, the fifth and final support level is $ 20,000, which is the lower bound of the descending trading channel shown in purple.

The market cannot grow without corrections, so declines should not be seen as the start of a long market crisis. Even the most optimistic buyers sometimes need to close their positions and recoup their profits. When the market is down, on the other hand, it would be a good idea to acquire more assets and hold them until prices are satisfactory again.

Very soon we will know what the future dynamics of Bitcoin will be. Although corrections may still take place, the overall trend remains bullish and a new pump looks very likely. This move could even push the asset above its all-time high, as breaking past current resistance levels will push those who were previously skeptical to invest in cryptocurrencies. 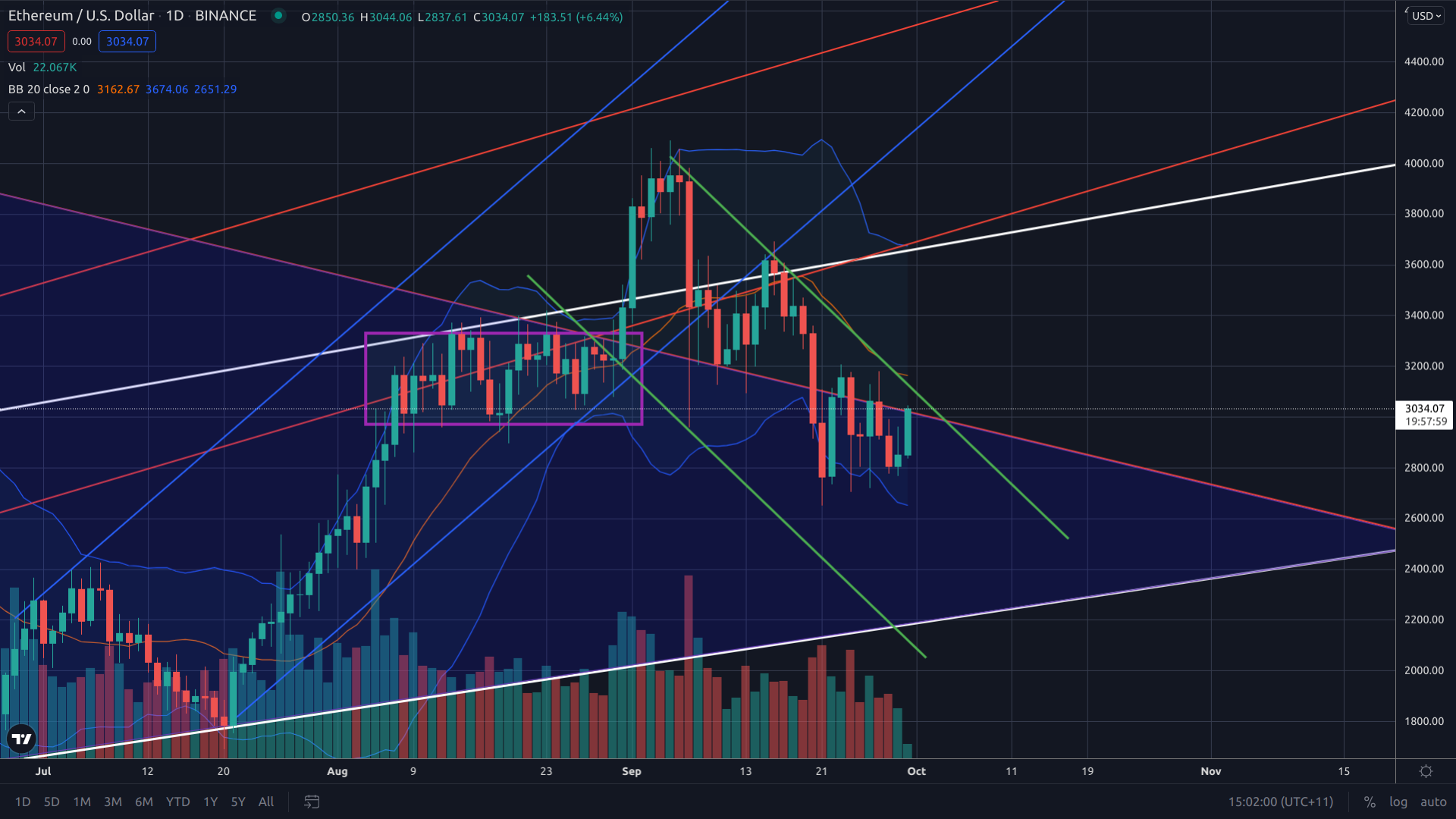 The second largest cryptocurrency in terms of capitalization continues to follow the fluctuations of Bitcoin. Assets started this new day with a significant rise. At the time of writing, Ethereum is trading around $ 3,050, which is very close to the upper limit of the descending price channel.

The overall picture of this altcoin shows strong signs of an impending bomb. Of course, the price can always go down, especially if new negative news related to crypto assets emerges soon. However, technically, the last two local lows for Ethereum and Bitcoin are at the same level, indicating that their assets have established a resilient support level that they can use as a foundation for further growth. Unless negative exogenous factors appear, the second cryptocurrency (as well as the first) will experience a very tangible bullish wave that will allow it to break out of the bearish price channel.

Index of fear and greed

This Thursday, September 30, the fear and greed index continues to set new records. Most likely, there are no traders left who can be tricked into selling their assets. Those who were willing to close their positions have been doing so for a long time and those who continue to hold their assets are unlikely to ditch them now, even if Bitcoin suddenly jumps to $ 3,000.

All of the factors just mentioned indicate that the market is preparing for a pump. Very soon, the momentum will reverse and prices will start to rise, while whales get richer and bear traders poorer. Even for whales, it is no longer profitable to lower the price any further. The only people interested in a bigger drop are overly pessimistic sellers who have opened short-term positions, the liquidation of which will also become one more factor pushing Bitcoin and the rest of the market to new heights.

The current levels are likely to be the last chance to acquire crypto assets cheaply. 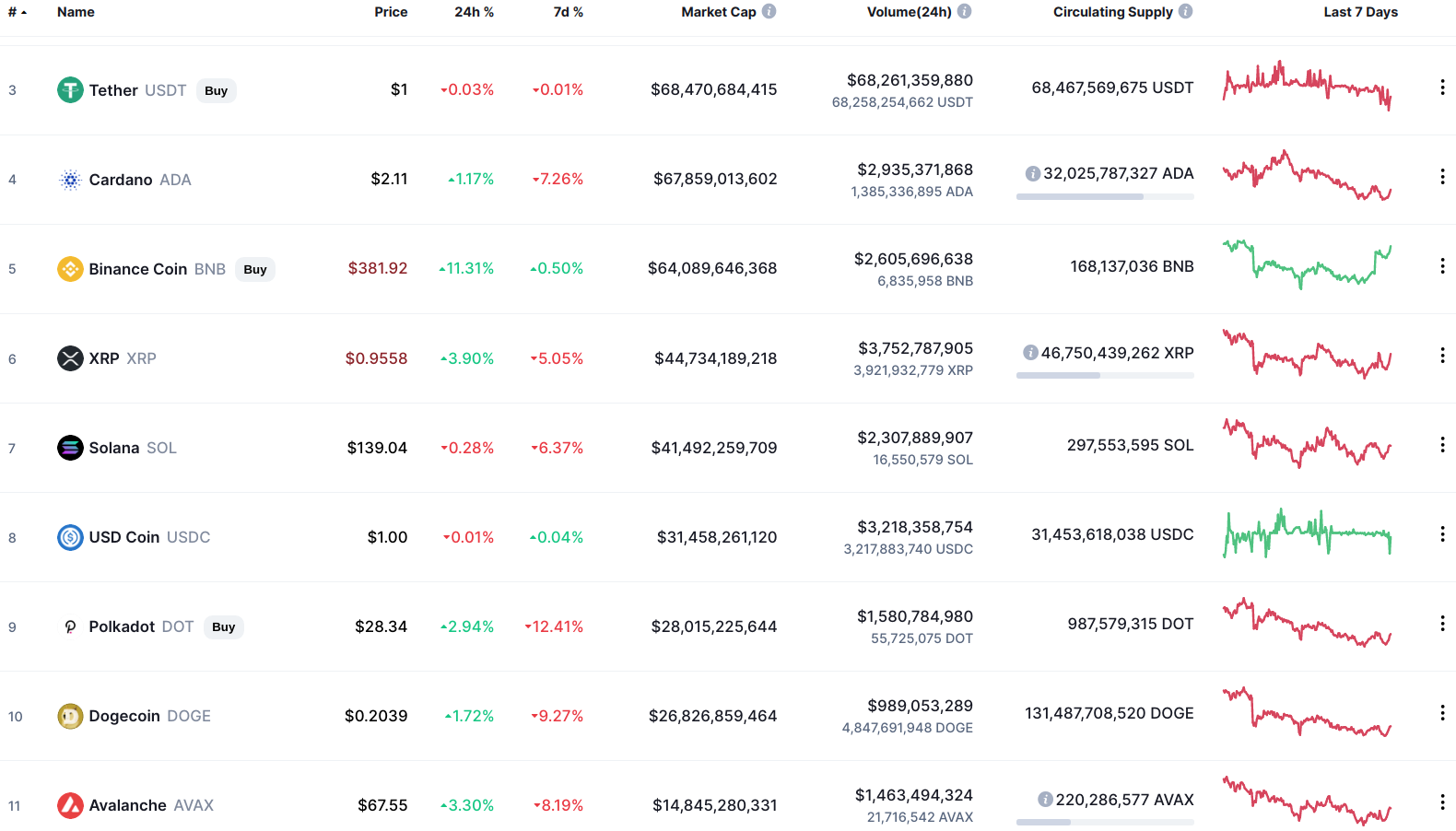 The ten most popular altcoins according to CoinMarketCap show quite positive dynamics. Cardano (ADA) is poised to regain third place in the rankings, while Binance Coin (BNB) reports an increase of more than 10%. The market is about to enter a bullish phase. 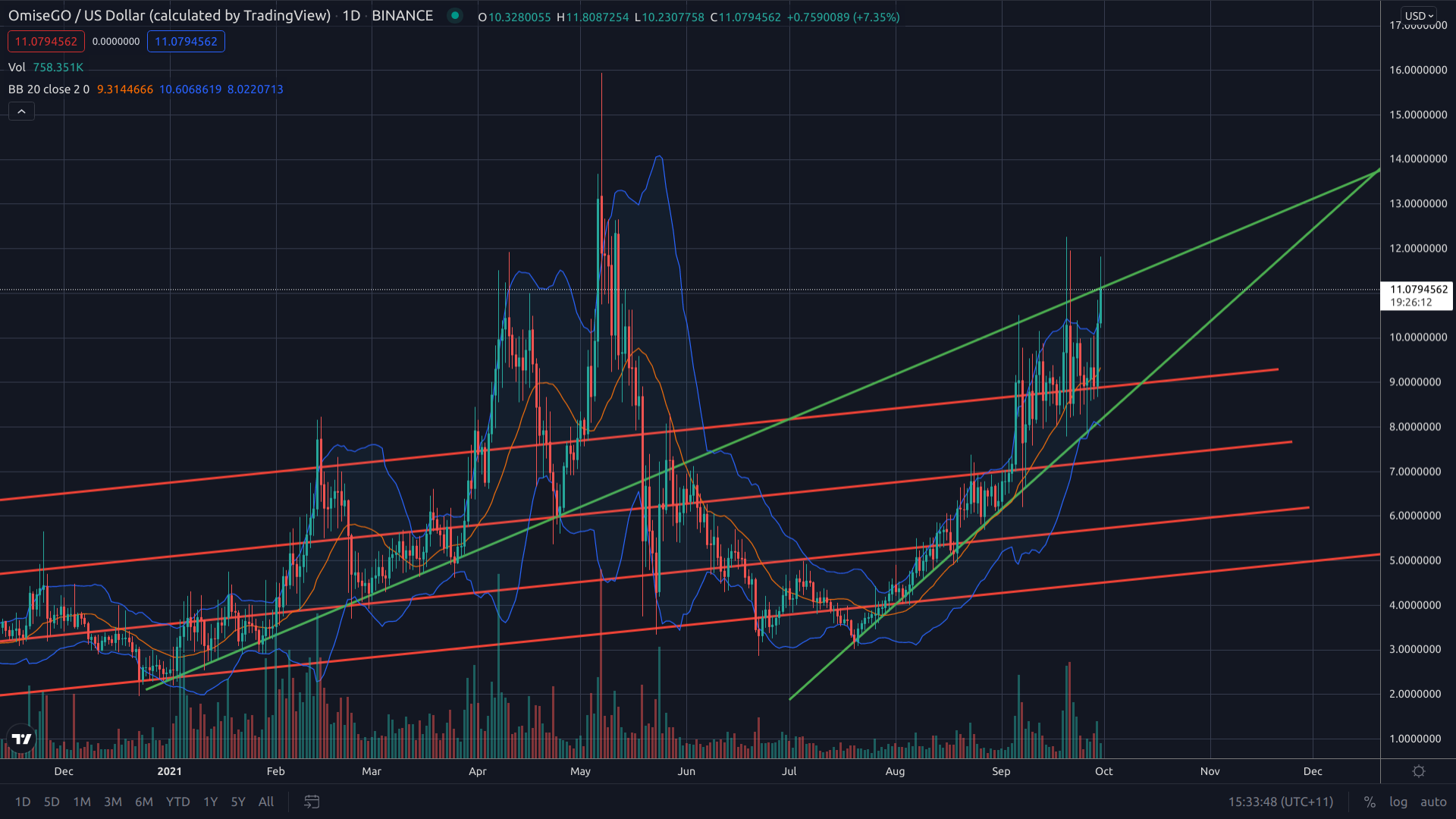 OMG Network (OMG) becomes the best performing token this Monday among the 100 most traded cryptocurrencies according to CoinMarketCap. During the last day, this asset reported a profit of more than 19% to its holders. If the price of Bitcoin rises a bit, OMG Network could head towards its all-time high. 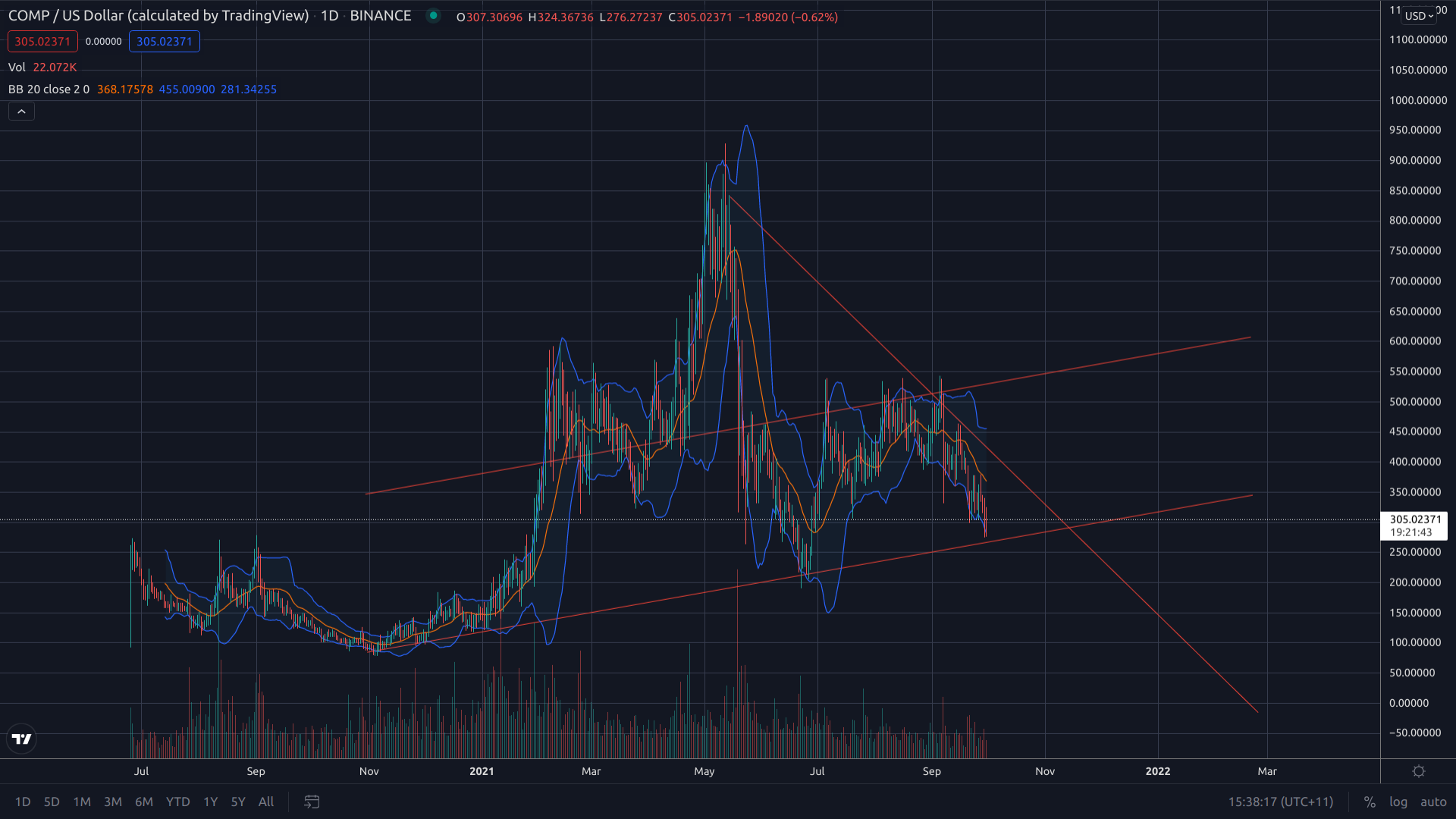 According to CoinMarkerCap, the compound (COMP) becomes the worst performing token of the day among the 100 most traded cryptocurrencies. The price of this asset has fallen by approximately 9% in the space of one day. However, its chart indicates that the compound has almost reached its all-time low, which makes it worth taking a closer look.

As the situation with the US debt that is on the verge of default is not yet resolved, a new collapse could still occur. However, the good news from the SEC and the fact that the market has already reached the extreme fear zone indicate an imminent trend reversal. Then it would be appropriate to prepare your portfolio for growth.