Israeli archaeological authorities announced Sunday the discovery of a “unique” tomb dating back to the time of Pharaoh Ramses II and filled with dozens of pottery, bronze objects and bones.

The vault was accidentally discovered on September 13 in the Palmachim National Park, south of the Tel Aviv metropolis, when an excavator came across a piece of stone that turned out to be the roof of this crypt.

A video released by the Israel Antiquities Authority (IAA) shows astonished archaeologists gleaming with dozens of pottery pieces of all shapes and sizes from the reign of an ancient Egyptian king who died in 1213 B.C.

In the burial were found bowls, some painted red, others with bones, bowls, pots for cooking, jugs, lamps and bronze arrowheads or spears.

These items were funerary offerings meant to accompany the deceased on their final journey to the afterlife. They have been found untouched since they were placed there some 3,300 years ago.

At least one relatively intact skeleton was found in one corner of the burial.

“This vault could give us a more complete picture of Late Bronze Age funerary practices,” Eli Yannay, an IAA specialist on the period, said in a statement, referring to the “extremely rare” find.

“When I saw the objects in the cave at Palmachim Beach, my eyes immediately sparkled, such a discovery happens only once in a lifetime. “Nobody has touched me since their first use is incredible,” says David Gelman, an archaeologist with enthusiasm. from IAA.

The pottery’s origins – Cyprus, Lebanon, northern Syria, Gaza and Jaffa – are indicative of “intense commercial activity along the coast,” Yannai said in a statement. 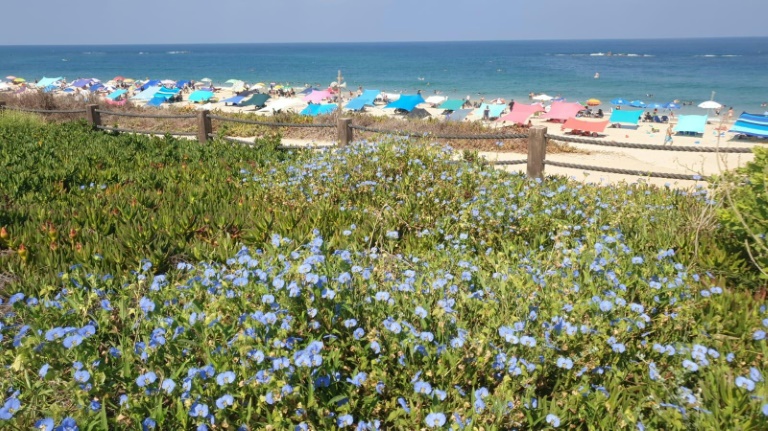 Palmachim Beach National Park, south of Tel Aviv, where pottery from the time of Pharaoh Ramses II was discovered in a burial cave on September 18, 2022 (Israel Nature and Parks Authority/AFP – Shlomi AMRAN)

Mr. Gelman has put forward a hypothesis as to the identity of the skeletons that were in this vault, located on the now popular beach.

“The fact that these men were buried with weapons, including whole arrows, shows that they may have been warriors or guards on ships.”

The vault has been sealed off and guards have been posted around it, awaiting the development of a further excavation plan at the site, where “several sites” had already been looted in the short period of last week, from the site’s opening to the site’s closure. IAA said.