Mysterious hexagonal diamonds, which do not form naturally on Earth, have been discovered in rare ureilite meteorites found in northwest Africa – from the mantle of a dwarf planet in our solar system. These are the largest diamond-like crystals discovered to date. Understanding their formation opens the way to industrial applications to create minerals stronger than diamond and perforated graphite, used in computer science in particular.

Carbon is one of the most abundant elements in the universe. It gives rise to many different structures, including diamond, as well as a special form of the latter, lonsdaleite. The latter is recognized as even harder than standard cubic diamonds. Lonsdaleite is named after the famous British crystallographer Dame Kathleen Lonsdale, who was the first woman to be elected a Fellow of the Royal Society.

You should know that this extremely hard material is found in ureilite meteorites. Indeed, they tend to contain more diamonds than any known rock and are currently the only major set of specimens from the dwarf planet’s mantle.

Unlike traditional diamonds, which are formed when graphite is slowly compressed by pressure deep within the Earth’s mantle, lonsdaleite could have formed in the chaos of a cataclysmic collision in interplanetary space.

A team of scientists from Monash University, RMIT University, CSIRO, the Australian Synchrotron and the University of Plymouth found evidence for the presence of lonsdaleite in these ureilite meteorites and uncovered their possible formation pathway. Their work has been published in Proceedings of the National Academy of Sciences.

In particular, the team found “folded diamonds” in rare meteorites. These meteorites likely come from the dwarf planet’s mantle, or a massive asteroid that was destroyed 4.56 billion years ago in a giant impact with the dwarf planet. Based on the fact that diamond is the hardest natural material, the team wanted to understand how a wrinkled diamond could have formed.

To this end, McCulloch and his RMIT team, graduate student Alan Salek and Dr. Matthew Field, used advanced electron microscopy techniques to capture hard, intact sections of meteorites to create snapshots of the formation of lonsdaleite and common diamonds.

McCulloch said in a statement: “There is strong evidence that there is a recently discovered process of formation of lonsdaleite and ordinary diamond that resembles the process of supercritical chemical vapor deposition that occurred in these space rocks, probably on a dwarf planet shortly after the explosion. catastrophic collision.

This chemical vapor deposition method is used to create diamonds in a laboratory, in a specialized chamber. Specifically, a mixture of gaseous hydrocarbons is used to create a carbon plasma over a substrate (most commonly silicon) on which carbon atoms settle and accumulate to form a crystalline structure. High purity methane is the gas most commonly used as a carbon source and is miscible with hydrogen. The latter is critical to the process as it selectively removes non-diamond carbon. To carry out the reaction, gases are ionized into chemically active radicals. This takes place in a growth chamber using an energy source such as microwaves or a hot filament.

In the case of meteorites, Tomkins said the team hypothesized that the lonsdaleite in meteorites forms from supercritical fluid at high temperatures and moderate pressures, almost completely retaining the shape and textures of pre-existing graphite. He explains: “Later, lonsdaleite was partially replaced by diamond when the environment cooled and the pressure decreased. These results helped solve the long-standing mystery of the formation of carbon phases in ureilites.” 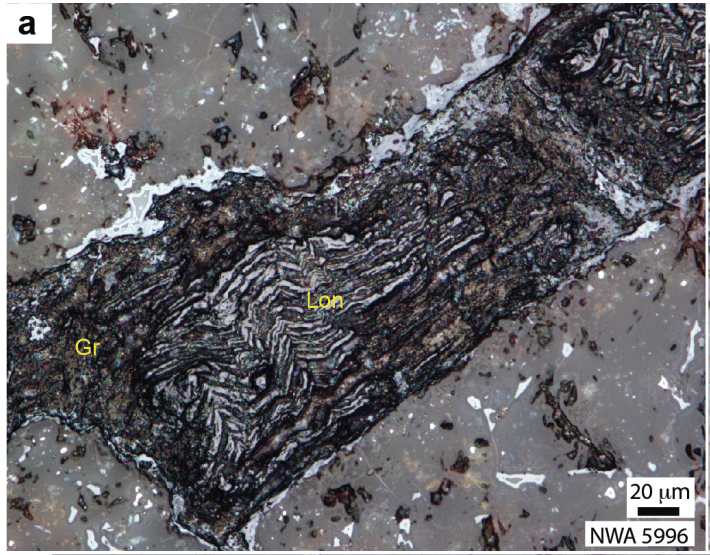 Indeed, in an article published in The Conversation, the authors explain that subsequent work by Helen Brand at the Australian Synchrotron confirmed the result of the formation of hexagonal diamonds by partial conversion of lonsdaleite. They compared diamond, graphite, and lonsdaleite in 18 different ureilite meteorites and established the formation sequence: “In the first stage, graphite crystals piled up deep inside the asteroid’s mantle due to high temperatures, causing other surrounding minerals to grow, repelling the graphite. crystals.”

The authors then determined that this asteroid had undergone a giant impact that produced a rich mixture of fluids and gases, a supercritical fluid that caused lonsdaleite to form by replacing folded graphite crystals that almost completely retained the graphite’s complex texture. The authors point out: “Of course, bending lonsdaleite or diamond is actually impossible – it was formed by replacing pre-existing shapes,” due to the immediate drop in pressure and temperature after the cataclysm.

McCulloch, director of the RMIT Center for Microscopy and Microanalysis, insists that: “This study categorically proves that lonsdaleite exists in nature. We also found the largest lonsdaleite crystals known to date, down to a micron in size – much, much thinner than a human hair.”

What is particularly interesting about this formation method is that it is similar to industrial chemical vapor deposition, but operates at a moderately higher pressure (~1–100 bar) due to the reaction between graphite and CHOS supercritical fluids. This process paves the way for the production of molded lonsdaleite for industrial and computer applications.

Indeed, the team says lonsdaleite’s unusual structure could help develop new methods for making superhard materials for the mining industry. Tomkins says: “So nature has provided us with a process that we are trying to replicate in industry. We believe lonsdaleite can be used to make tiny, super-hard machine parts if we can develop an industrial process that facilitates the replacement of preformed graphite parts with lonsdaleite.”

Proceedings of the National Academy of Sciences.