According to NASA, the James Webb Space Telescope is expected to remain in orbit for more than ten years, thanks to a fuel-efficient launch on Christmas Day.

The telescope was transported aboard the Ariane 5 from Arianespace. Despite two brief medium-term fixes, its launch used less fuel than initially expected. This will allow the $ 10 billion observatory to carry out in-orbit science operations over a lifespan of more than 10 years, the US space agency said in a statement Wednesday.

The additional fuel will be used for what NASA calls “station maintenance” maneuvers, which are small thrusts intended to adjust Webb’s orbit once it has reached its destination. On the other side of the Earth, in an area known as the second Lagrange point, or L2. It’s a million-kilometer journey that should take about six months.

Once it arrives, it will begin sending unfiltered images back to Earth of the most distant and oldest parts of the galaxy, some 13.7 billion light-years away, or 13.7 billion years ago, just 100 million years ago. after the Big Bang. This is a leap forward from the Hubble telescope, which launched in 1990 at the same time as the space shuttle Discovery. 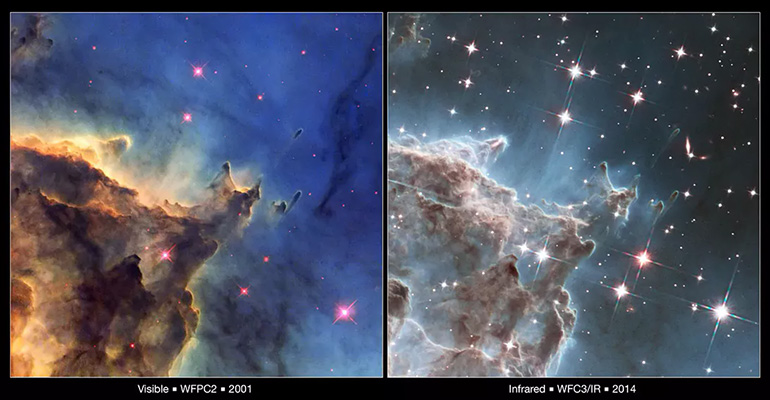 Comparison of visible and infrared Hubble views of the Monkey Head Nebula. Although Hubble has some infrared capabilities, they are weak compared to the Webb telescope.

The Webb Telescope overcame a long list of unexpected setbacks and delays before its launch on December 25, but NASA said there are many other factors that could affect its final operational life.