Launched on December 25, the James Webb telescope, Hubble’s successor, crossed lunar orbit, tested its high-speed antenna to transmit data twice a day, and began to unfurl its parasol. A protection tool whose successful implementation is decisive for the success of the mission.

Each day brings him closer to his destination. Launched on December 25 from the Kourou Space Center (Guyana), the James Webb space telescope carried out its second combustion, as announced in a NASA statement on Monday, December 27. “At 7:20 pm EST, 60 hours after takeoff, the second Webb midpoint correction burn began. It lasted 9 minutes and 27 seconds and it’s over ”.

It is a delicate maneuver, but one that allows the new generation space observatory to correct its course. The premiere took place just over twelve hours after its release and lasted sixty-five minutes. A third corrective combustion is expected to take place 29 days after launch, or in late January 2022. NASA also tweeted to see the Webb telescope cross the lunar orbit without issue.

It has been a very busy night! Not only did we complete our second burn, but #NASAWebb also passed the altitude of the Moon while continuing to navigate towards the second Lagrange point towards #UnfoldTheUniverse. Bye, @NASAMon! 👋 🌑 pic.twitter.com/IStul0fwFB

This Wednesday, December 29, in the early afternoon (in France), Webb was approximately 566,000 km from Earth. Thus, it has already made more than 39% of its route that takes it to the Lagrange point L2, commonly called L2, where it will be parked in orbit. L2 is about 1.6 million kilometers from Earth, on the opposite side from the Sun.

It will take several maneuvers to get James Webb to his destination: the L2 Lagrange point of the Sun-Earth system. © NASA

Once in orbit in L2, and for at least the next five years (duration of the main mission), this huge space telescope will observe the near and mid-infrared and some visible light.

To retrieve the data collected by James Webb, ground crews tested the Gimbal Antenna (GAA) deployment. Scientists will use this high-speed satellite dish to collect at least 28.6 Gb of data twice a day. This test lasted one hour.

Additionally, the researchers also activated Webb’s temperature sensors and strain gauges for the first time overnight. This data is now available to engineers monitoring the telescope’s structural and thermal systems.

This Tuesday, December 28, Webb’s umbrella began to unfold. “Earlier this afternoon, the Webb mission operations team completed the deployment of the first of two structures that contain inside Webb’s most unpredictable and complicated element: the sun visor,” NASA details in a statement. press.

These structures contain the five neatly folded sun visor membranes, as well as the cables, pulleys and release mechanisms that make up the Webb sun visor assembly. The front pallet was completed deploying at 1:21 PM EST. It took four hours. The team should now deploy the rear paddles.

Putting these pallets in place is just the first step in unfolding the umbrella, which is expected to take at least five more days. The implementation of this protection is critical to the success of the mission. The visor helps keep Webb and his instruments in an extremely cold environment. If this were not the case, the telescope could not fulfill its mission. Assembling the tower, releasing the covers, extending the intermediate arms and unfolding the five layers of the umbrella will be the next steps. 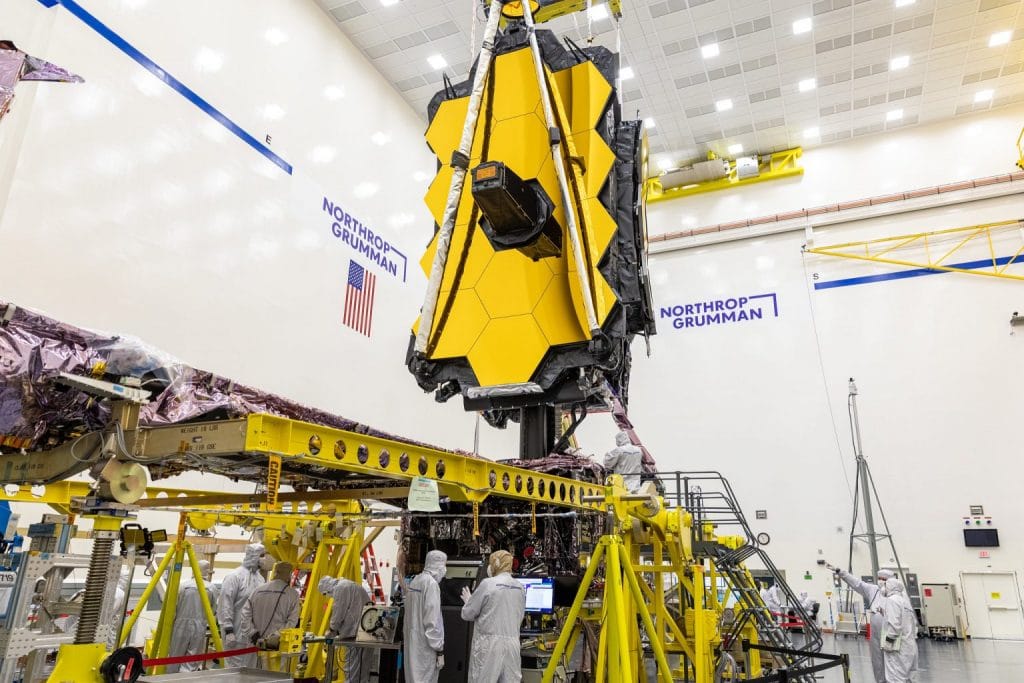 The lens hood on the James Webb telescope is as big as a tennis court. © NASA

Putting this space shield in place for the Webb Telescope is one of the most difficult NASA has ever attempted. Additionally, the operational team built a bit of flexibility into the initial schedule. Thus, depending on the success of the deployment of the sun visor, it could evolve in the coming days.