On October 13, 2021, the swords will speak … to solve the truth! At least on movie screens. Obviously a fan of this type of confrontation – we remember the “Duelists” (1971) in which Harvey Keitel and Keith Carradine played the heroes of Joseph Conrad’s novel (1908) – the Anglo-American director Ridley Scott is interested this time for a authentic drama: the one that in December 1386 opposed the gentleman Jean de Carrouges (played by Matt Damon) to his friend Jacques Le Gris (Adam Driver). Without revealing the outcome of the intrigue, this film, shot in France, tells the story of the return expedition of Jean de Carrouges, whose wife (Jodie Comer) accuses Le Gris of rape … A complaint that will end in a ” judicial duel “,” a judicial procedure in Calvary “, as explained by the historian Pierre Pretou, specialist in the history of medieval justice at the University of La Rochelle (Charente-Maritime). Or the manifestation of a divine choice in favor of the winner of the fight. “God is telling the truth in the case,” continues the historian.

The “Carrouges-Le Gris” affair in the fourteenth century, a duel of ordeals of justice. Adam Driver and Matt Damon in the Ridley Scott film “The Last Duel.” Credit: 2021 20th Century Studios

Indeed, when the trials did not allow to arrive at a truth “of certain science”, the legal duels – not to be confused with the simple duel – could not be rejected by the justice. This is what happened in the fourteenth century with the case called “Carrouges-Le Gris and the Parliament of Paris”, a widely publicized trial by the chronicler Jean Froissart.

“In the 14th century, rape was considered a very serious crime. In a society that lives and survives thanks to patrimonies and inheritances, the fact of disturbing the legitimacy of inheritances for this crime can lead to the death penalty”, explains Pierre. Pretou, member of the magazine Criminocorpus, dedicated to the history of justice and crime. Since the Ordinances of Saint-Louis in the 13th century, French royalty had tried to put an end to court duels and ordinal justice procedures, considered too archaic. In the “Carrouges-Le Gris” case, the two former friends had decided to fight in person, while as knights they had the possibility to choose a “champion” to do so on their behalf. Being the public duel, platforms had been erected around a closed field and the fight between the two men had taken place in the presence of the judges and the then King of France, Charles VI (1380-1422). First with a weapon pass on horseback, as a joust, then with sword and shield, once the combatants are dethroned. 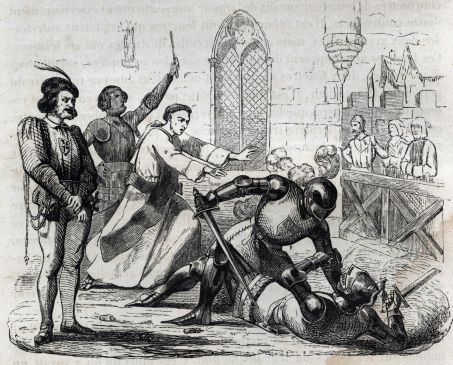 Old engraving that relates the case of the judicial duel “Carrouges-Le Gris” of December 29, 1386. Credits: AFP

Were the nobility alone capable of “washing their honor” with arms? “Absolutely not,” says Pierre Pretou, referring to another famous case, a terrible legal duel that took place in Valenciennes in the middle of the 15th century. In the 1450s, two peasants, Mahiot Coquel and Jacotin Plouvier, had effectively faced the “iron stick” by not using the weapons of the nobility whose handling they did not know. Mathieu d’Escouchy, a chronicler at the time, reported that Mahiot Coquel, disgraced by a refusal to marry, had killed the coveted father. The victim’s son, Jacotin Plouvier, then wanted to take revenge, but justice could not resolve the case in the courtrooms, it is due to a judicial duel that was resolved. An “excessive duel” that -according to the chronicler- had horrified viewers by its extreme violence. “With his hands he took out both eyes of the test and the fist peeked out. Aveuc, while he was face down on his knees, his heart exploded and he strangled him with his hands, then he threw him off the lists” … A he fights to the death away from the “beautiful fact” of God’s justice, recognized in the Carrouges-Le gris duel.

In any case, this legal duel was not “the last”. Away from. Even in the 16th century, several cases were reported in southern France. As for the “short” duels, the last two witnessed in France in the 20th century, faced the dancer Serge Lifar against the Marquis de Cuevas, in 1958, and Gaston Deferre against René Ribière in 1967 … But without victims, apart from some bars …

The pupil responds to digital information, not just light.

Tesla: Elon Musk, the man who is worth more than Nike on his own

The pupil responds to digital information, not just light.

Tesla: Elon Musk, the man who is worth more than Nike on his own