We have long known that high concentrations of mercury, a heavy metal that is liquid and not very viscous at room temperature, can be toxic to humans: the first recorded case of mercury poisoning dates back to 50 BC. However, its harmful health effects have not prevented the entire population in some regions of the world from intensive exploitation of it, increasing the concentration of mercury in the atmosphere by 300-500% compared to natural levels. Published September 23, 2022 in the journal Frontiers in Environmental Science, the study takes an unprecedented look at the effects of long-term and heavy use of Maya mercury on both the health of members of this civilization and their environment.

If the use of mercury in early Mesoamerican societies has nothing to do with discovery, we found traces of it as early as 2000 BC. e. among the Olmecs, however, it remains rather poorly documented. The most common of these forms is cinnabar, or mercury sulfide (HgS), a bright red mineral widely used by the ancient Maya for decoration, crafts, and rituals, especially in funerary rites. More rarely, vessels filled with liquid mercury, called “elemental”, were found in the tombs. “But it is possible that there were many more – and these containers simply remained invisible in the current archaeological record,” the authors of the publication on the university community website The Conversation say.

This use, estimated by researchers to have lasted nearly a millennium, between 250 and 1100 AD, must have been the cause of intense soil pollution at that time, which continues to this day. It would also be so important locally that even today it would pose a potential danger to archaeologists working on the sites of occupation. “Places with elevated mercury levels tend to be from the Late Classic period (600-900 AD), including domestic courtyards,” the researchers write.

Seven out of ten sites, including Chunchucmil in present-day Mexico, Marco González in Belize, and La Corona in Guatemala, had mercury levels equal to or above current environmental toxicity criteria. In Tikal, an ancient Mayan stronghold nestled in the heart of the Guatemalan forest, recorded concentrations in the city’s central waters have reached a staggering 17.16 parts per million, where the threshold for toxic effects of mercury in sediments is set at 1 part per million. 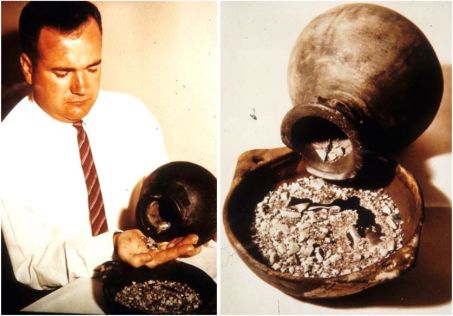 In addition to patios, archaeologists speculate that the volatile metal also escaped from the walls and pottery and then spread into the ground and water. “For the Maya, the objects could contain chulel, or soul power, which was in the blood. Thus, the bright red pigment of cinnabar was a priceless and sacred substance, but unbeknownst to them, it was also deadly. soils and sediments around ancient Maya settlements,” said Nicholas Dunning, a professor at the University of Cincinnati and co-author of the study, in a statement.

Archaeologists also note that the Maya, who traded mercury in the cities, had to travel long distances with their cargo, with known deposits located on the northern and southern borders of the ancient Maya world. However, they still admit that they know almost nothing about this exploitation: “Where and how did the Maya get mercury? Who mined it, traded it, and transported it on foot for hundreds of kilometers through what is now Central America? they are asking.

Another question inevitably arises: Did the Maya know about the poisoning? We know, for example, that the Incas were aware of the dangers of cinnabar, even if, according to other researchers, this should be put in perspective. And if other works are required to determine it, then traces can already be assumed: one of the last Mayan rulers of Tikal, the Black Sun, who ruled around 810 AD, for example, is depicted in frescoes in a state of morbid obesity, a well-known consequence of long-term exposure to mercury . “A small but growing body of osteoarchaeological research indicates anyway that exposure to mercury may have led to significant accumulation of mercury in the ancient Maya and presumably toxicity and adverse health effects,” the study authors conclude.