All it takes is an announcement by Elon Musk to make Tesla’s ranking in the used car market jump or drop. In this speculative game, there are sometimes winners, but usually more losers.

The announcement of the Model Y for less than €50,000 on 26 August 2022 generated immediate enthusiasm. Model 3 owners saw this as an opportunity to upgrade to a more family-friendly model and used their credit card to place an order. Unless in the secondary market it clearly played against them. In the game of supply and demand, some are not immune to cold showers.

Like the price in the stock market, the value of used Tesla models can fluctuate in contrast to the usual curves of the used car market from other manufacturers. Buying a Tesla is also a new approach to the car, with its good and bad sides.

If there are speculative bubbles on luxury and collectible cars, Tesla is the first manufacturer to favor them at its own expense in consumer models. Model S buyers won’t be the first to say otherwise: they’re the first to face the dizzying discounts after Elon Musk’s unpredictable announcements.

In recent months, Tesla’s rankings have followed an upward trend, as have many other recent cars. Faced with shortages of parts and longer delivery times for new vehicles, customers have turned to the used car market. Demand was high and sometimes difficult to meet, prices began to rise.

After just over 6 months of driving their Model 3 or Y models, some owners were even offered trade-in offers at prices in excess of their new purchase price. Several testimonials on Tesla’s private Facebook groups testified to this easy capital gain opportunity. An exception that only works when demand exceeds supply.

Prior to this, price curves followed a natural and gradual upward or downward evolution. Except that Tesla’s specialty is to surprise. This is what the company did on August 26 when it launched the Tesla Model Y Propulsion for less than 50,000 euros. With such an offer, several Model 3 owners or people holding purchase orders for a Model 3 or Y due to be delivered later this year have placed a new order on the American manufacturer’s website. If we can imagine such a spontaneous purchase of a new iPhone 14, then it is always amazing to see it for cars worth several tens of thousands of euros.

However, buying a Model Y is usually used to replace a Model 3. As such, many Model 3s are likely to be sold on the used car market at the same time. Inevitably, when supply exceeds demand, ratings drop.

The cost of a used Model 3 Propulsion was over €43,000 the day before the Model Y was announced. It dropped to under €39,000 a few days later at companies specializing in exporting Tesla to other markets. Again, there are many Tesla reviews in private groups. These companies even paused re-shoots to absorb the influx of requests in time. From now until the delivery of the first model Y Propulsion, the recovery rate curve will certainly continue to fall, unless, for example, Elon Musk announces the end of production of his cars.

Examples of the most recent Model 3 announcements. // Source: snapshot from the Leboncoin website.

For sellers, the goal is to have a minimal gap between selling their car and buying a Model Y. The reality of the market is likely to be quite different, especially since many are still convinced of high demand. They didn’t necessarily see the number of ads on leboncoin literally explode in a matter of days (over 1,000 as of September 9th). Pages and ad pages are only a few days old.

It’s a small element that some Tesla customers also learn the hard way. Many wanted to take advantage of the takeover offer offered by the American manufacturer. I must say that the estimates of the amount of trade-in are quite good compared to other rating services.

However, this is a temporary exchange offer for 7 days. For a Model Y ordered for delivery between December 2022 and February 2023, the estimate provided by Tesla today will cease to be valid when the vehicle is actually returned. Before the new vehicle is delivered, a new valuation will be made according to the market price of the used vehicle on that date. Suffice to say, some may be disappointed if the market is still saturated with used Model 3s. 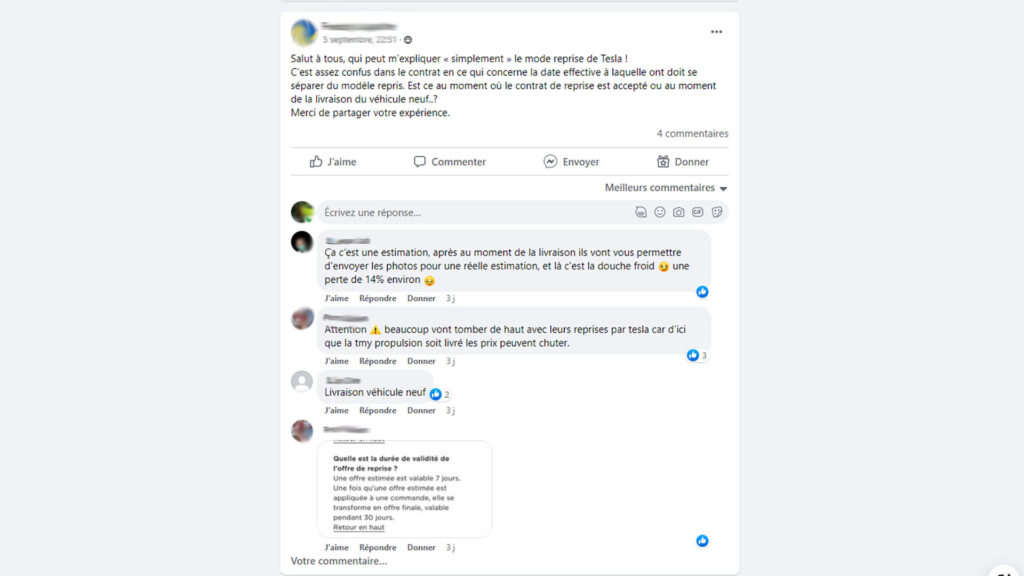 Reviews in the Facebook group about covers. // Source: capturing a private FB group

With every price cut announcement, the same observation

At the beginning of this article, we told you about the example of early Model S buyers. Some tried to resell their Tesla for €120,000, bought a few months earlier at a higher price. But it was enough for Elon Musk to announce a significant reduction in the prices of used models on the same day, so that they were more expensive than new ones. Nothing has changed for several years. It’s just that there are more models in the Tesla lineup and more and more risk of falling prices.

This fairly regular fluctuation is really atypical for the automotive industry. Apparently, only Tesla manages to base its used car ratings on the same whims as stock market quotes. Better to know before buying to speculate.