Need a break? – Last week was an important week with several important macroeconomic meetings. The results of the second quarter fell, and they are mixed. If Apple and Amazon have satisfactory earnings and higher than expected, then this does not apply to Meta Platforms (Facebook), Microsoft, Alphabet (Google). Fed Chairman Jerome Powell said the United States is not in a recession and expressed confidence in the country’s economic growth. Rates were raised as expected and the market seemed to appreciate this as it recovered. Bitcoin and cryptocurrencies also took the opportunity to recover. S&P 500 and NASDAQ reaching important resistances, is this the end of a rebound? Let’s take a look at the clues left on the charts.

The Macro Hebdo point is offered to you in partnership with Trading du Coin and its algorithmic trading solution finally available to individuals.

Bitcoin has been bouncing around for weeks and it could go on:

Bitcoin price against the dollar (1D)

BTC has been showing daily bullish momentum since the trend reversal was confirmed on July 19th. Bitcoin has broken out of its range and is currently moving above it. In the coming days, it may again be at the level of the previous resistance, which turned into support at $22,300. If this were the case, buyers would have to confirm support by protecting the zone.

Note that bitcoin has changed its momentum on a daily basis, but the price remains fragile as it develops below the bearish trend line that began during the peak in November 2021. In addition, the stochastic is not far from the bearish divergence. This will then show that the move is fizzling out and that the sellers can regain control of the course. The RSI is encouraging as long as it develops above the bullish trendline in black.

We should be attentive to the movements of US stocks, because they can again show the direction of cryptocurrencies. BTC could join the $28,500 zone, but buyers will have to defend support at $22,300.

Risk Off: Gold Rebounds While Dollar Continues to Fall

As stated in previous releases, gold was able to find buyers at $1,690: 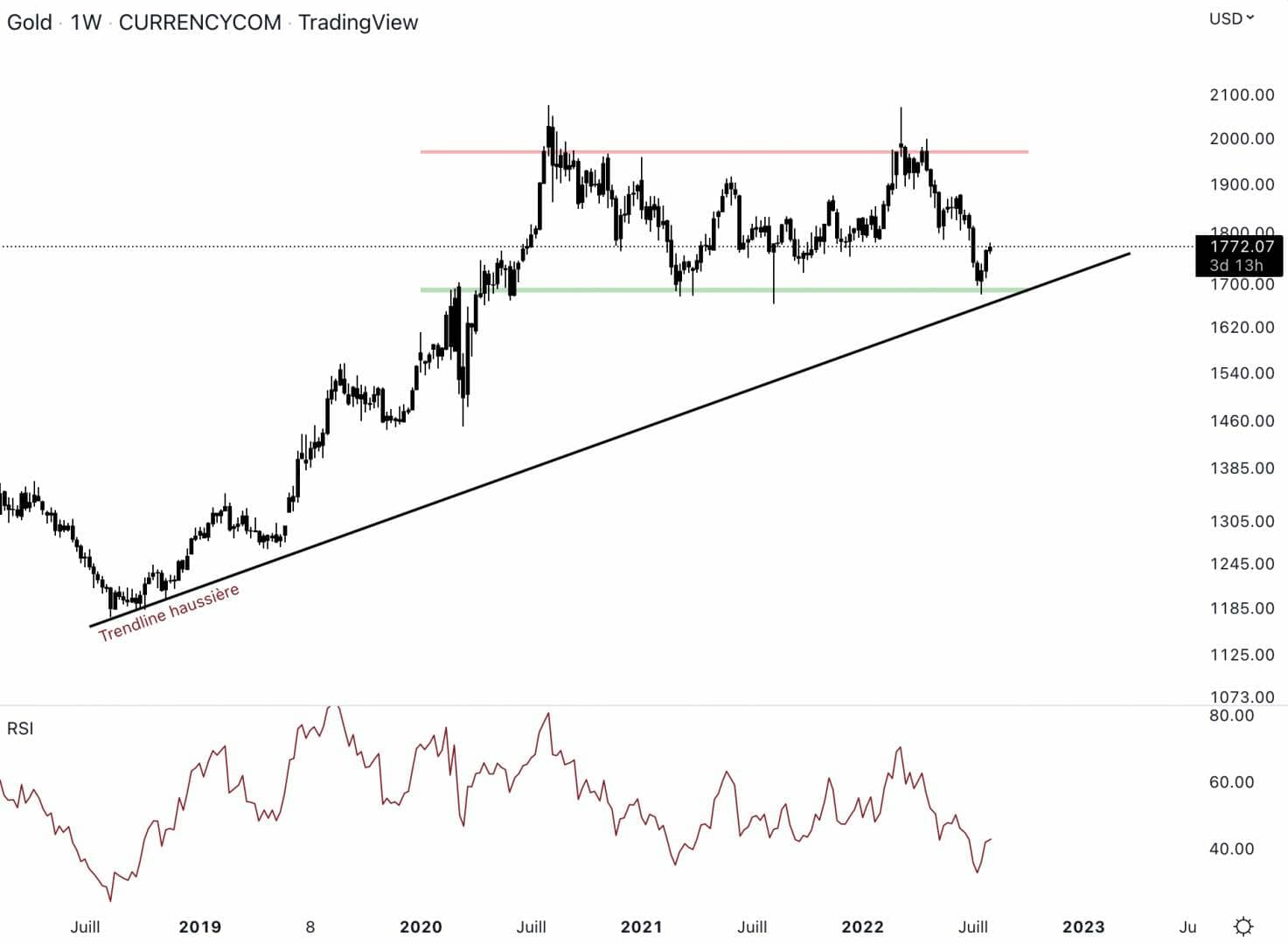 The price of gold against the dollar (1W)

Gold is in the range of $1690 to $1970. Sooner or later, the price of gold may again touch the ascending trend line that started in 2018. This could allow gold to resume its upside phase. However, if the buyers are frantic and the trend line gives way, the identified range will be treated as a distribution. As long as the price moves above the support and the bullish trend line, this can be considered an accumulation zone. We can make this assumption because the price is in a bullish primary.

At the moment the momentum is still bearish, we must remain vigilant in the short term.

The dollar continues to fall

The dollar has been falling in recent weeks and risky assets have benefited. For risky assets like Bitcoin and cryptocurrencies in general, the dollar should weaken. Here is the dollar index chart: 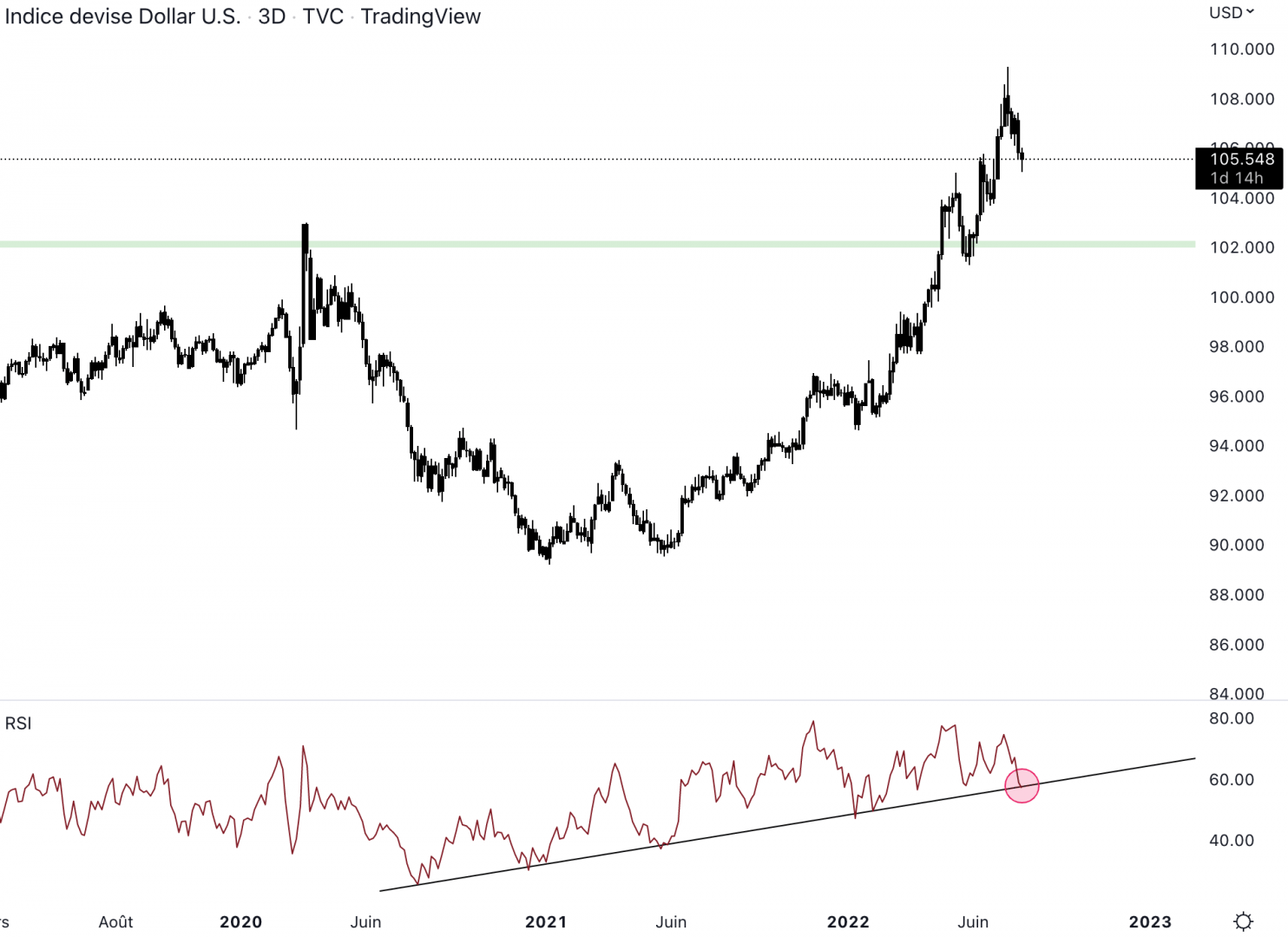 A weaker dollar is good for risky assets, but momentum remains bullish for now. Moreover, the price is still moving above the support. The dollar would have to change momentum to think the dollar’s rally is over.

The momentum diverges in the unit of time shown on the chart. The divergence will be confirmed if the RSI closes below 58. The RSI is still moving above the bullish trendline and could recover in the coming days. If the divergence is confirmed and the trend line is broken, this may be a good sign for risky assets.

The American market is approaching resistance. End of the uptrend?

As explained in the introduction, growth continued last week despite mixed data from Gafam. In terms of technical analysis, indices like the S&P 500 and NASDAQ face significant resistance.

The US index is likely to be stuck in the coming days as there is significant resistance in its path: 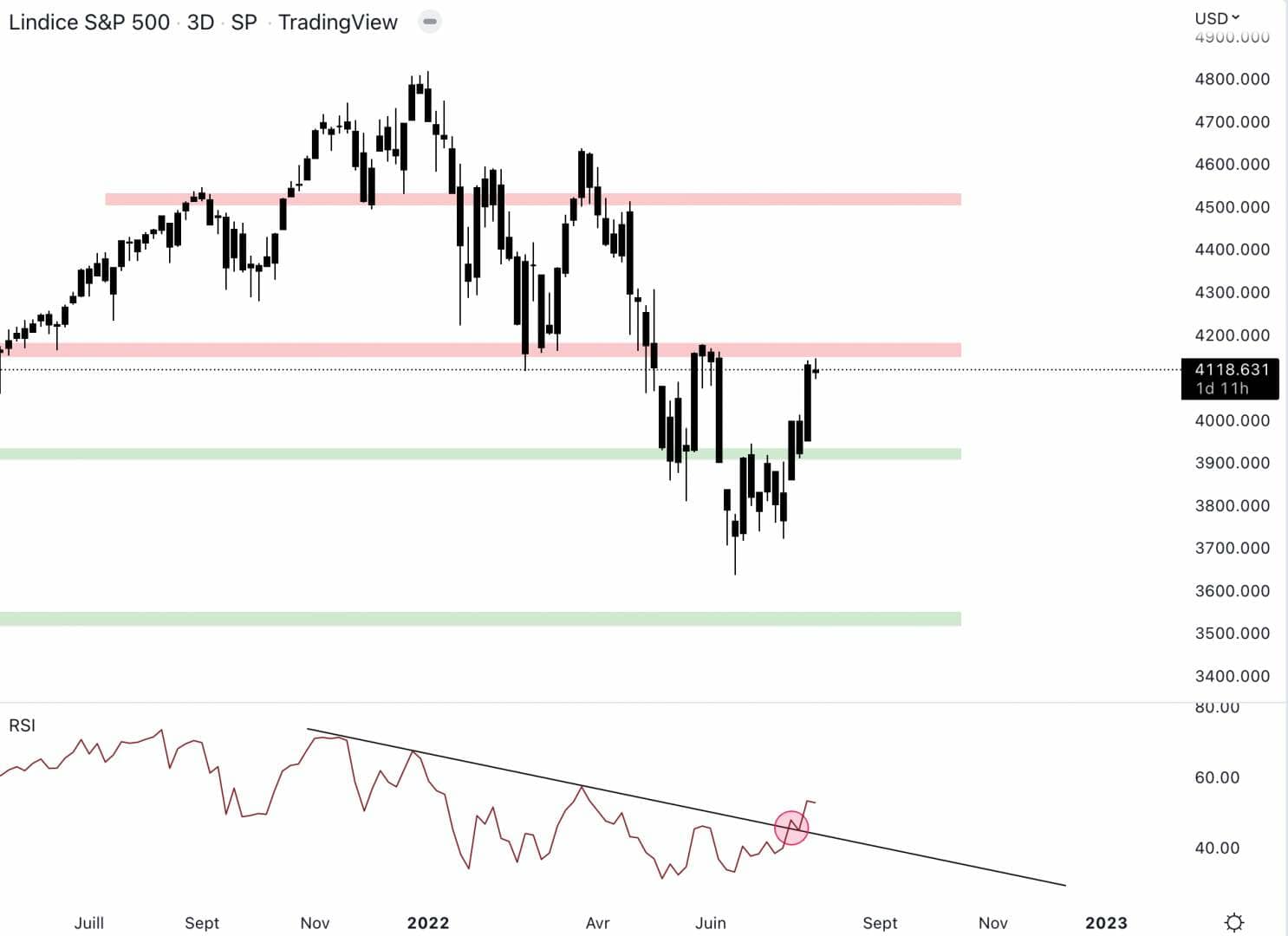 The S&P 500 has reversed momentum and is trying to regain its value amid a weakening dollar. After breaking through the resistance at $3,900, the price moved up to the next resistance at $4,165. The price may stop after rising by almost 15%.

The momentum is very encouraging in three-day time units because the RSI is breaking the bearish trendline dating from the end of 2021. The momentum is no longer fragile and even marks a bullish divergence. Divergence means shortness of breath, and then the price can fluctuate between the two limits. A range of $3,900 to $4,165 is likely. Of course, a breakdown of resistance with such an encouraging impulse is possible, but this is not the most probable hypothesis.

Coinbase is trying to develop a market low: 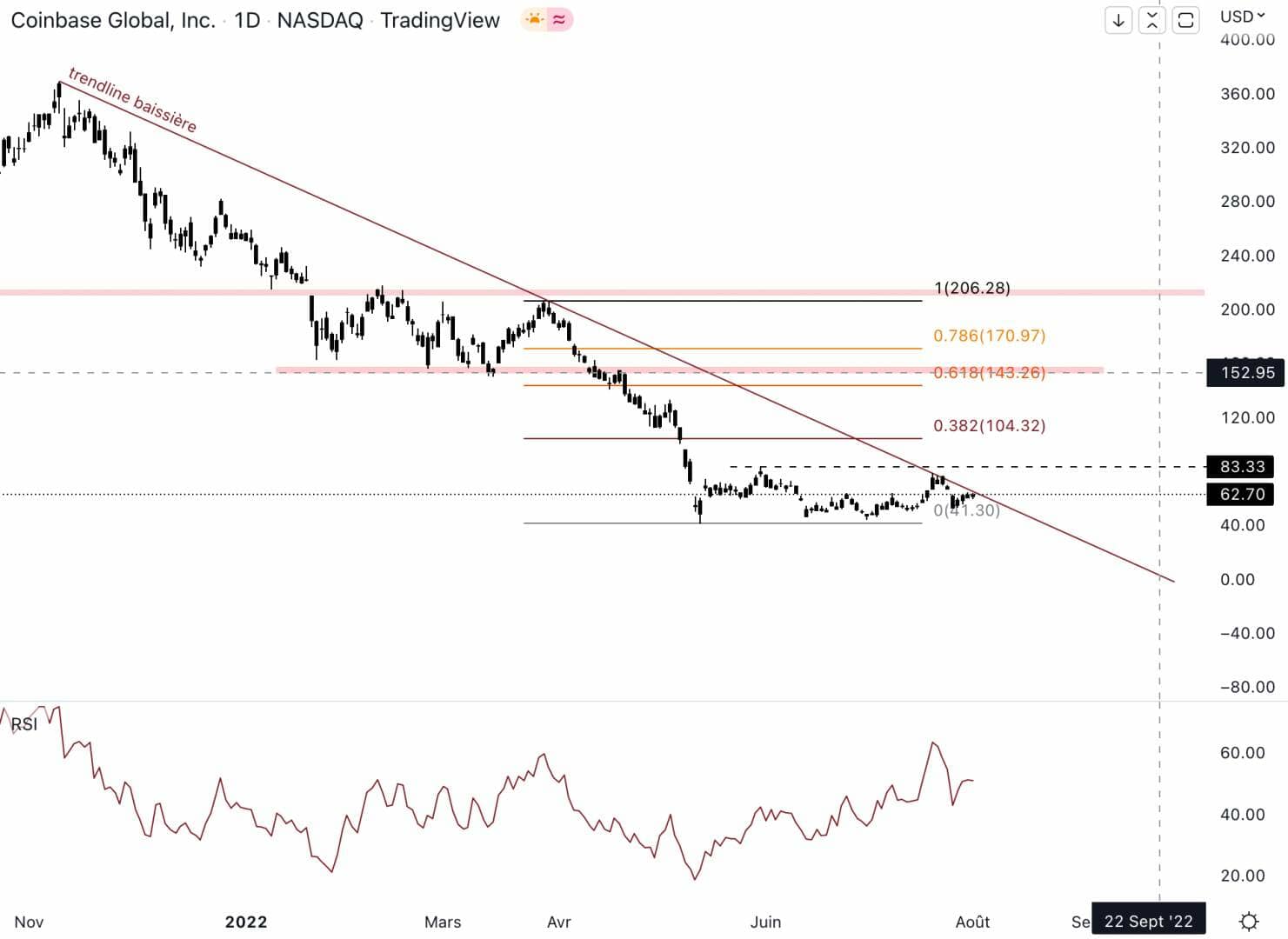 Coinbase price is still bearish and below the bearish trend line. This once again rejected the $78 rate. If Coinbase manages to close above $84, the bearish trendline will be broken and the price will reverse momentum. This would be a good sign for cryptocurrencies, because it will show interest in them. The momentum is focused on increasing the asset.

The NASDAQ is in the same situation as the S&P 500. After rebounding more than 18%, it is approaching the resistance level: NASDAQ price against the dollar (1D)

The NASDAQ changes momentum daily, but remains below the downtrend line for now. It is approaching double resistance on a daily basis with resistance at $13,000 and a bearish trendline. It seems likely that the index will take a break after recovering for a few weeks. The momentum remains bullish and confirms the upside for now.

If the dollar continues to fall, risky assets such as the S&P 500 and NASDAQ could take advantage of this to continue rising. These assets are coming to significant resistance, they are likely to stop.

After several weeks of growth in risky assets, a consolidation phase is not ruled out. American indices are entering hard zones, which in the short term may bring down the course. The dollar is losing momentum, but the trend is now bullish, and this remains problematic for risky assets. If the dollar initiates a change in trend, we may consider declining the market for risky assets. Bitcoin and cryptocurrencies are likely to follow the movements of US stocks, it will be necessary to be attentive and vigilant for the slightest weakness in US stocks.

Is it possible to be a winner every time? Whether the price of bitcoin is in great shape or is experiencing turbulence, Coin Trading invites you to increase your chances of success. Indeed, Trading Du Coin allows individuals to access an algorithmic and 100% automated trading tool. A true trending mechanism, this tool has been designed to adapt to market reversals and position itself on the most dynamic crypto assets of the moment.