Video game revenue will grow by 5.4% in 2022 to reach $203.1 billion. In a report published on May 5, video game industry analytics firm Newzoo explains that this growth is mainly due to the mobile market. Consoles are still selling very well with new ways to play like cloud gaming.

In 2021, the turnover of video games was 192.7 billion dollars, this year it will reach 203.1 billion. The increase is due to the large number of players. By the end of 2022, there will be 3.09 billion of them to play on PC, consoles or mobile devices. The United States tops the balance sheet with $50.5 billion, followed by China with $50.2 billion.

In the same category
Related Articles

The mobile market is the biggest winner in 2022 with $103.5 billion. On its own, it represents more than the console and PC market combined. However, growth is weaker than between 2020 and 2021, when mobile gaming exploded with the Covid crisis. China and Japan are the two regions dominated by mobile, despite weak growth of 2.8% and 1.1% respectively. Tencent is holding China’s lead with games like League of Legends Wild Rift. However, China’s control over game releases and screen time is part of the reason for this slight increase.

There are many developing countries in Southeast Asia with a strong mobile market. Latin America is also experiencing this recent growth with greater access to smartphones, an improved internet network and the emergence of new means of payment. The release of major mobile games such as Diablo Immortal and Apex Legends Mobile will greatly contribute to the growth of this sector in 2022. 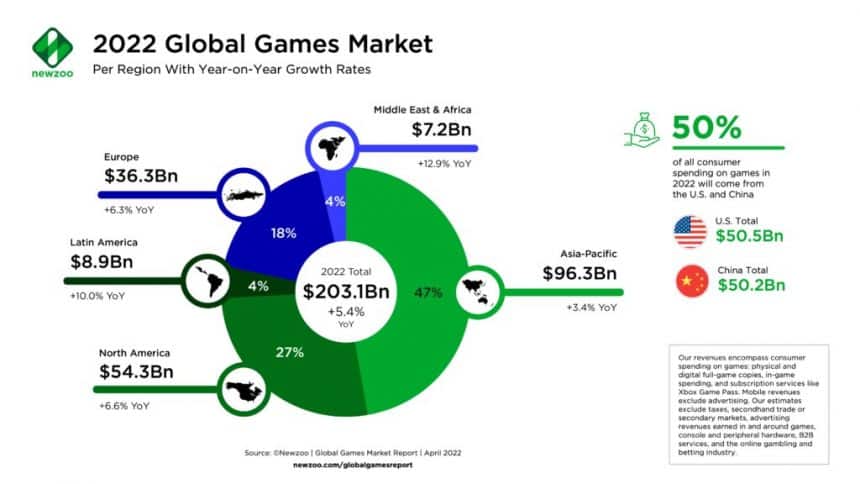 Popular licenses that have become a hit on consoles

Faced with the dominance of mobile devices and the rise of cloud gaming, the console market is resisting despite the fact that the production of the PlayStation 5 and Xbox Series has been affected by the shortage of semiconductors. This does not prevent the console market from growing by 8.4% compared to 2021 and generating $56.9 billion in revenue.

The release of console-exclusive games such as Horizon Forbidden West, God of War and Gran Turismo for PlayStation, as well as the Pokémon license for Nintendo Switch or the long-awaited Starfield for Xbox, contribute to the good financial health of consoles.

Long-awaited titles from third-party publishers, such as Bandai Namco’s Elden Ring and Activision’s Call of Duty, are making consoles much more appealing. Maintaining service games like Fortnite, Warzone, and GTA Online also generates recurring income on the console. The growing presence of latest generation consoles in homes and subscriptions to PlayStation Plus and Xbox Game Pass subscriptions are also driving this growth.

PC games are in a steady decline in the face of mobile dominance. In 2022, it will bring in $41 billion. This sector is weakening because there are no big console releases. It manages to keep up with utility games like League of Legends or Apex Legends. The decline of the PC in China is in favor of mobile devices and will accelerate between 2022 and 2024.

The overall growth of video games is associated with the emergence of an increasing number of gaming services with hybrid business models. Subscriptions, microtransactions, and possibly soon ads in some games keep the sector growing. Growing cloud gaming, like at Microsoft, will help attract new audiences. Which leaves a great future for the video game industry.