Now it is the “priority” of the Legault government: the administration of the third dose of COVID-19 vaccine will be accelerated in Quebec in an attempt to control the increase in cases and curb the Omicron variant. The interval between the second and third doses is shortened from six months to three months. A measure welcomed by the experts, who remember, however, that the challenge will be to find the necessary resources to vaccinate at a sustained rate.

“Based on that, we will definitely adjust our schedule. There will be additional appointments,” said Health Minister Christian Dubé on Thursday, confirming that around 1,500 people had already volunteered through the I contribute! Platform. to lend a hand to the government in the massive vaccination effort.

Quebec says it is busy “sorting out those with the skills” to administer vaccines, but still invites everyone who thinks they have these skills to come forward. 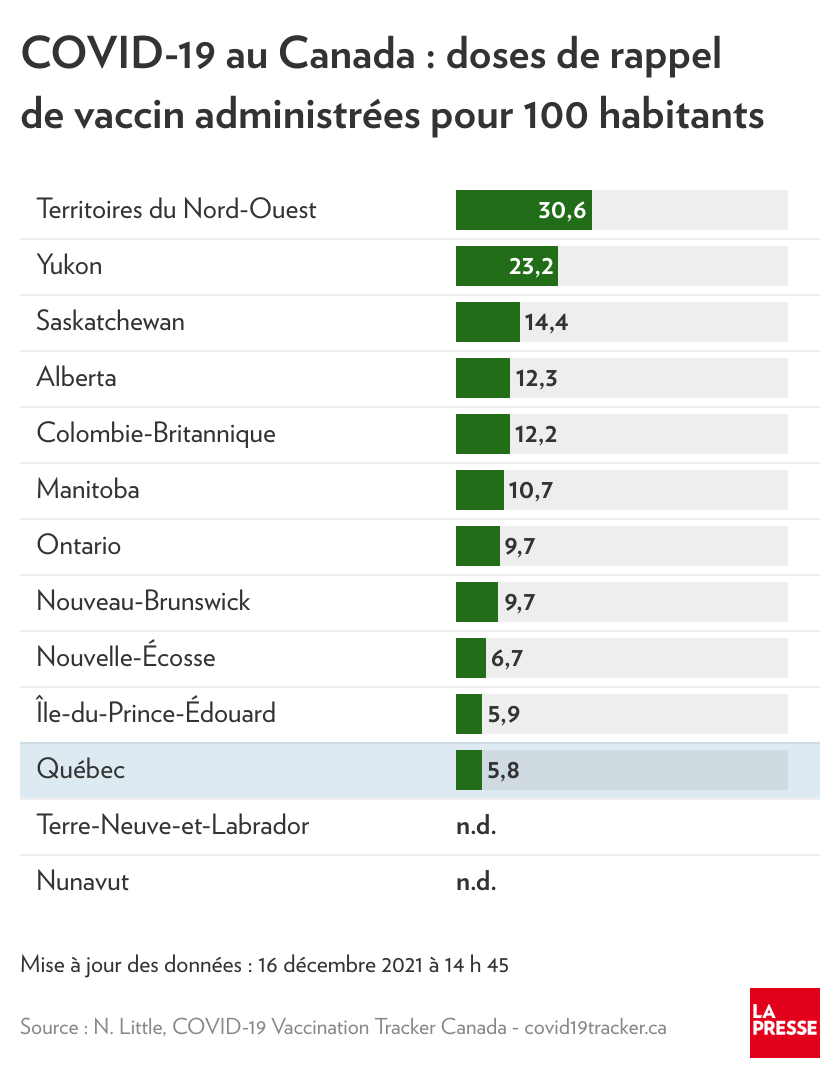 As of Monday, December 20, Quebecers aged 65 and over will be able to make their appointment. And as of Monday, December 27, it will be the turn of the 60s and over. Vaccination can also be faster in some areas. The government hopes to immunize up to 100,000 people a day soon. Health workers will also be given priority.

In CHSLD and private residences for the elderly (RPA), where 99% of residents have already received their booster doses, all visitors and caregivers will now be required to present a vaccination passport, as a preventive measure. “We will also make our rapid tests available there,” promised Mr Dubé, without however giving a deadline. The minister then appealed for the safety of the elderly. “You have to put the mask on, you have to be careful. Distance yourself, especially in common areas, be careful. Even if he has his third dose, the virus is circulating ”, he reminded the users of these residences.

In recent months, Quebec “has been able to avoid major outbreaks [dans les RPA et les CHSLD] Christian Dubé also slipped, saying that we do everything possible so that the nightmare of 2020 does not happen again.

“It becomes an important key, this third dose”, for his part stressed the Prime Minister, François Legault, remembering however that it will be “important to respect the order according to the risks of each one”. “If we were to open tomorrow morning to people aged 18 and over, that would mean that we could find ourselves in a situation where a 40-year-old could pass a 70-year-old who is much more vulnerable. We want to go there in order of risk, to go there gradually, “he warned, before adding:” The fact that we are better vaccinated than in other places, that will help us, sure, but despite that, we are going to be beaten. ”

Like the government, the experts La Presse joins are unanimous: the third dose of vaccine will be crucial to overcome this new wave of cases, powered by the Omicron variant.

The most recent data shows that the Pfizer vaccine significantly loses its efficacy against the Omicron variant. Thus, the vaccine protects 70% from serious complications and the risk of infection is only reduced by 33%. However, previously the vaccine was effective against more than 90% of severe cases and 75% of infections.

“It is not negligible. Although the third dose was not absolutely necessary for the majority of the population before the Delta variant, it is considerably higher with the Omicron variant”, says Alain Lamarre, professor and researcher specialized in immunology and virology at the Institute. .

A booster dose would quickly raise the level of antibodies, recalls Mr. Lamarre, giving the immune system a better chance of protecting itself against the Omicron variant.

If Quebec has made faster administration of the third dose a priority, “Quebec’s real problem is our ability to vaccinate,” said Gaston De Serres, an epidemiologist at the Institut national de santé publique du Québec (INSPQ). “We must considerably increase the number of vaccinators. This is where the bottleneck is, ”he said.

To be as effective as possible, vaccination must go hand in hand with barrier gestures. “Everything else, the mask, the social distancing, the cleaning of hands, the stakes are still high. From the moment they were applied, at times we have tended to be a little more negligent, to take ourselves more lightly, ”warns Dr. Maryse Guay, medical consultant for the Department of Public Health and the Department of Health. Public Health. ”INSPQ, and member of the Quebec Immunization Committee.

The fourth dose of vaccine validated by the Ministers of Health: who is concerned and under what conditions?

Where does the “brain fog” come from in some patients with long Covid?

Update on COVID-19 in Ontario | 615 patients in intensive care

For Eric Clapton, people who are vaccinated are under “mass hypnosis”

The fourth dose of vaccine validated by the Ministers of Health: who is concerned and under what conditions?

Where does the “brain fog” come from in some patients with long Covid?

Update on COVID-19 in Ontario | 615 patients in intensive care

For Eric Clapton, people who are vaccinated are under “mass hypnosis”