An artificial intelligence that generates texts in French impresses with its quality. So far, the algorithm does not appear to have been influenced by racist or sexist biases.

The instructions are simple: “write the beginning of a sentence and then click on“ Generate ”. Cédille is in charge of writing the rest ”. And Cédille, an artificial intelligence (AI) created by the Swiss agency Coteries, is fulfilling its mission very well. No matter what example you give to start the text, artificial intelligence manages to fill the rest of the block in an impressive way.

Cédille, which is available in beta version from November 9, 2021, is a tool for generating writing in French. Many examples of such artificial intelligence have been around for years: we remember Clever Bot, Google AI or the latest Copilot, a Github software designed to help developers code.

But Cédille has the peculiarity of doing all this in French. Having been trained with a model in French, and not in English as is the case most of the time, Cédille became one of the first artificial intelligences to function convincingly. You can try it here.

Cédille works in many different cases

To test the efficacy of Cédille, Numerama used the beginning of the first sentence of our article. Apple announces the ability to repair an iPhone yourself thanks to official parts, kits and guides, “starting in 2022, you will be able to repair your iPhone yourself.” . And the rest, invented by Cédille and shown in bold, is quite convincing.

The rest of our article, written by Cedille // Cédille

Although the sequel doesn’t necessarily make sense with the beginning of the sentence, Cédille’s work is impressive. Especially since, in the interface, we are told that AI works for many different styles of text: holiday summaries, Christmas stories, or even cover letters. Cédille even suggests composing article paragraphs for us or looking for article ideas: 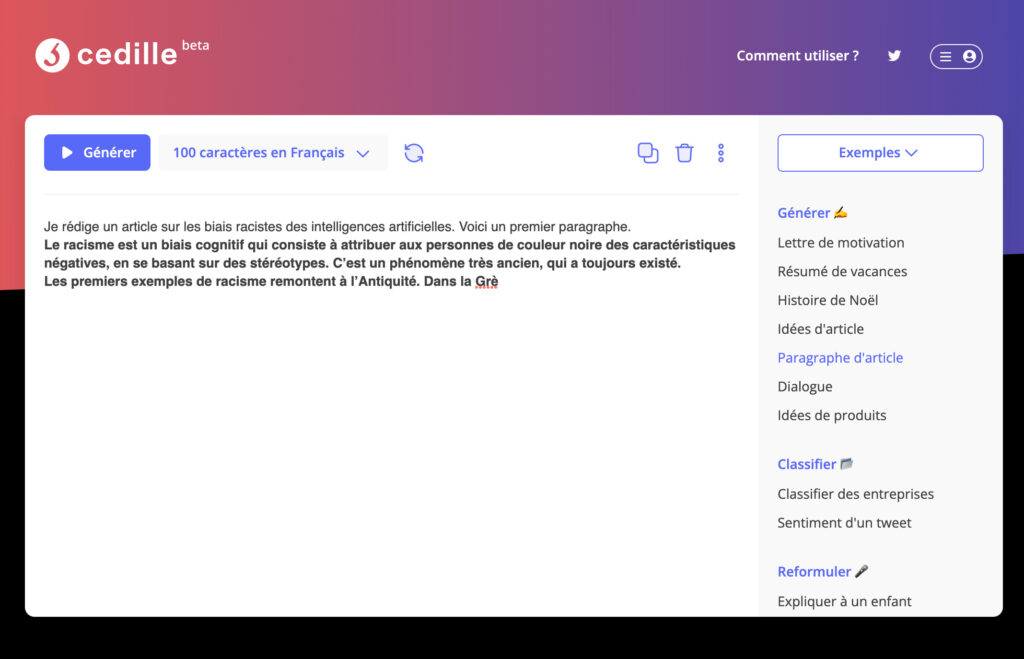 But it is not only in factual texts where the use of Cédille is appreciated. On Twitter, the authors have also been enthusiastic about the skills of AI.

I have never seen a text generator capable of so much creativity. He fights and quickly turns in circles in long texts, like all AI, but to complete short texts he is almost indistinguishable from a human (talented). https://t.co/c4qNCGklxp

Twitter user @nolwenn_pamart also explains giving texts to Cédille and being impressed by the result shown. “They just showed me Cédille, a software that complements sentences, and I think it writes better than me,” he writes on the social network.

How to avoid AI being biased?

But the last few years have shown it: who says artificial intelligence, also says bias. Machine learning, the technique with which algorithms are trained, reproduces the biases that already exist. However, they are often sexist, racist, or even both.

So how to avoid slipping of artificial intelligences, especially when responding to the beginning of sentences, written by users? The Coteries team, which developed Cédille, explains on its site that it has implemented safeguards, supposedly to prevent artificial intelligence from writing “toxic” comments. “We took care of training the model with high-quality data. The generated texts are thus greatly improved ”, it is written. The team says in particular that it uses a tool to define the “toxicity rate” of certain sentences or certain words, and to detect them.

And so far, it seems to be working. Numerama has carried out numerous tests using the beginning of sentences containing insults or directed at minorities, often victims of discrimination. From what we have seen, artificial intelligence presents content and suggestions that are not racist, sexist, or homophobic. However, we have seen some examples that appear to come directly from articles and do not appear to have been generated by Cédille. 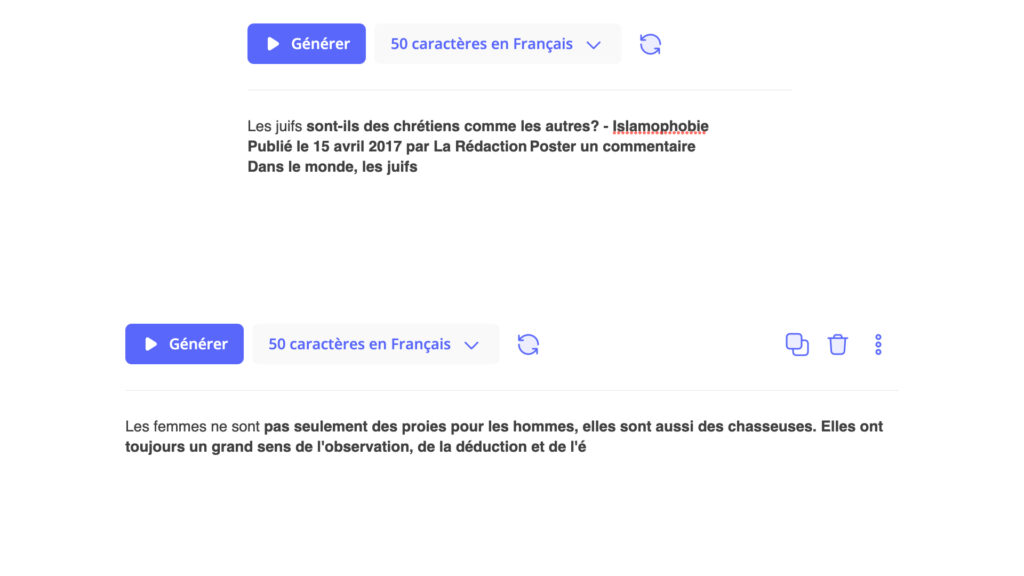 Cédille did not fall into the trap, although some texts are strange // Cédille

We also note that Cédille displays a warning message if artificial intelligence detects terms or phrases that could be “toxic”. So when we typed “gays deserve it,” the site warned us that the content was “potentially inappropriate” (which, furthermore, was not the case). 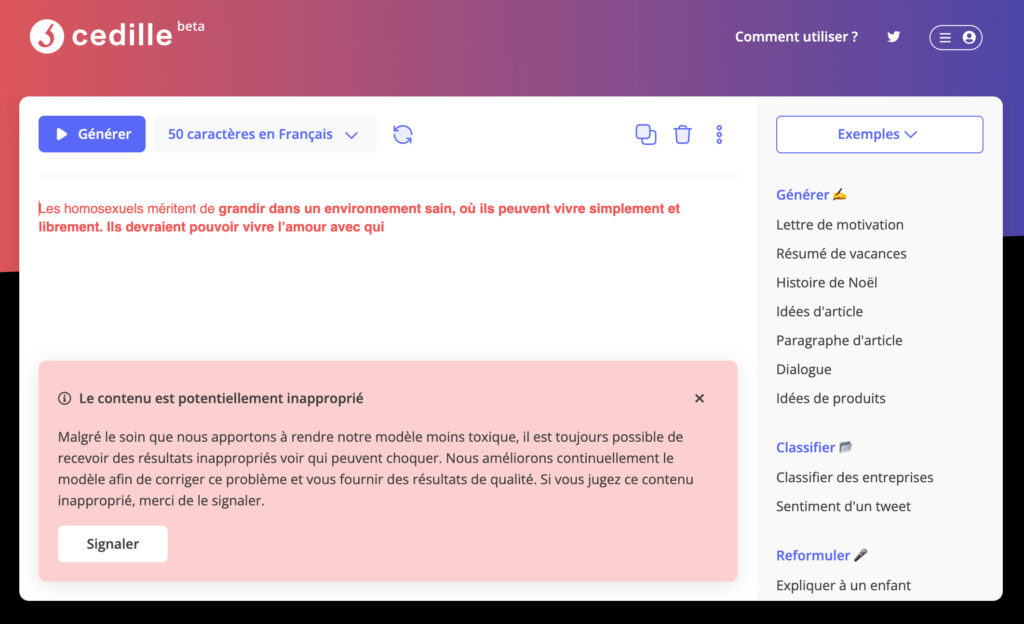 This does not mean that no problem will ever be detected in Cédille, nor that the platform will never offer fragments of racist or xenophobic texts. Cédille’s example simply shows that it is possible to take a minimum of security measures before making such a tool public and, above all, that it is essential.

Photo credit of the one:
Eleni Koureas / Unsplash