The Deco X 90, sold in a pack of two devices, allows you to set up a WiFi 6 network in Mesh. A network what? Let’s take two minutes to explain these two concepts. Wifi 6 is the new Wifi standard in the process of establishing itself in the field of wireless internet. Like any evolution of the genre, it goes hand in hand with an increase in the available speed, but the Wifi 6 arrives on top of that with a number of improvements and small features.

These have barbaric names like Mu-Beamforming, the generalization of Mu-Mimo, or OFDMA. To put it simply, thanks to these different technologies, you no longer have to wait. Where the old Wifi handled user requests almost individually, and therefore forced them to queue while waiting like at the pharmacy, Wifi 6 is easier to manage several devices at the same time, which allows save time without even increasing throughput.

As for the Mesh, this means that the network is “meshed” (mesh in English). Clearly, in a mesh network, each device must be able to receive, send and relay data, where in a more traditional network, some devices serve as routers and others as receivers, with a certain hierarchy of devices between them. We can find several interests in a mesh network, such as its resilience (if one device stops functioning, the others can take over) or its adaptability (if you move from one room to another, it should theoretically adapt and provide you with data in the most efficient way).

At TP-Link, the Deco range covers devices that work with Wifi Mesh. Like its competitors, TP-Link has been developing for a few months models capable of broadcasting Wifi 6. The Deco X90 is at the time of this writing, the most powerful offered by the brand with a gargantuan speed of 6600 Mbps, there where the model of the range below, the X60, offered “only” 3000 Mbps. In addition to this impressive flow, the X90 offers a set of small sides never seen before from the manufacturer.

In fact, out of these 6600 Mbps, it will already be necessary to remove 1200 Mbps because one of the antennas in the Deco X90 is used to maintain the Mesh architecture. Still, 5,400 Mbps of throughput is still an impressive number, and unless you have a great connection, you probably won’t hit it.

So what can we find to connect that would use so much bandwidth? The Deco X90 is clearly intended for home automation use, in an ultra-connected home full of devices that need internet to function. As proof of the number of “users” that the network can manage with this machine: we are talking about a theoretical total of 72 connected devices, and TP-Link experts even speak of “internal tests” which would indicate that the X90 can manage up to “200 users”.

We tested the version sold in a two-pack at 549 euros but there is also a pack with a single Deco X90. Given all the new features provided by this model, it is rather not recommended to buy it alone to pair it with other Deco products, as it would be impossible for slightly older devices to make the X90 work at its peak. capabilities. The pack of a single Deco X90 could, however, make it possible to acquire a third to complete WiFi coverage. 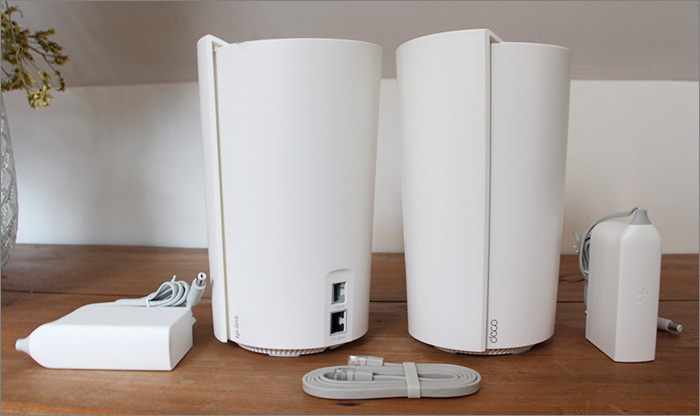 Taking it out of the box, its size and weight, a little larger than the average Deco, partly testify to its capabilities. To get an idea, it’s about a third thicker than a mug. It is a plain white tube, around which we would have wrapped a layer of white plastic.

On the top, we can see the TP-Link logo placed in the center. Below, we find the ventilation necessary for the four-core processors and 1.5 Ghz that it embeds. Next to it, there is also the input for the power supply and the reset button. On the left side, towards the lower part, an LED indicates whether the Deco is working correctly, whether it is restarting, or any other state. At the rear are two Ethernet ports, one of 1 Gbps and the other capable of supporting 2.5 Gbps. 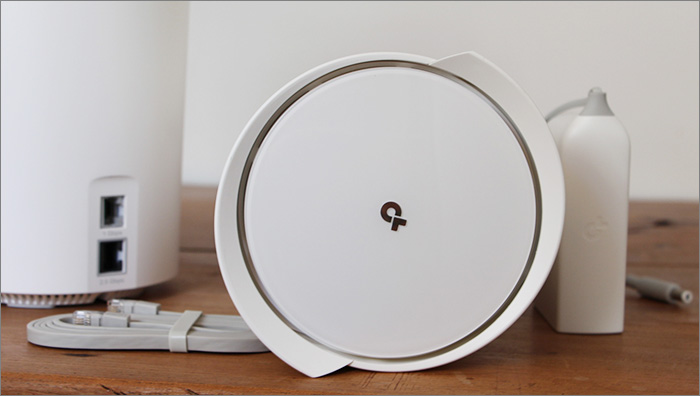 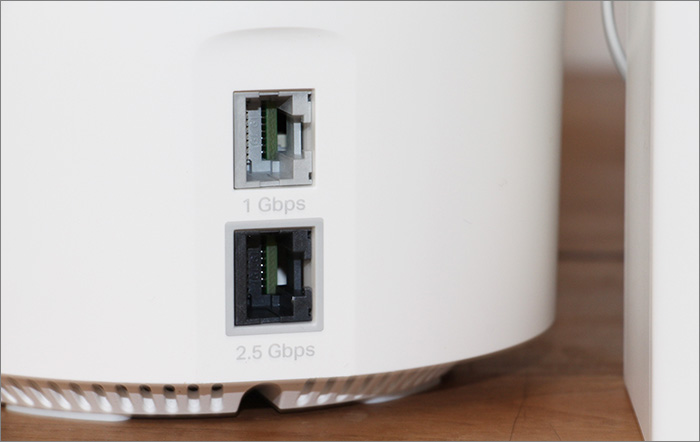 The installation is close to TP-Link standards, made extremely easy, thanks to the Deco application, which is still so well thought out and efficient. To do this, we choose the equipment we want to install from a list, we follow a series of very simple instructions. 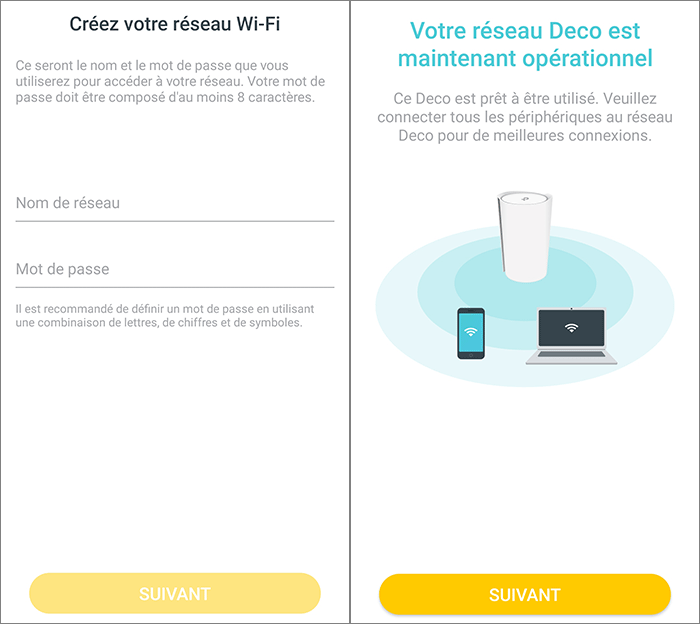 You have to connect a first Deco in Ethernet on the box, then monitor a Led placed on the side. Once it has turned blinking blue, you click on the application and the network is set up by itself, accompanied by reassuring little animations. The final step will be to name your Wifi network and give it a password. Once the first Deco is installed, you can install as many satellites as you want to enrich the network.

High-end network protection, but at a cost

The X90 is therefore intended for a connected home, where even the toaster would be connected to the internet. And precisely, in home automation, it is customary to say that connected objects are privileged targets because they are very poorly protected. With this high-end Deco, TP-Link offers a whole new protection, called Homeshield which seeks to protect the network as a whole.

We regret that to benefit from all its features, including the protection of connected objects, you have to pay 5.99 euros per month or 54.99 euros in annual package. Fortunately, it will be possible for any new user to take advantage of a one-month trial of the paid version, also called the pro version. An offer coupled with an Avira Prime antivirus and VPN duo is also available for nearly 9.95 euros per month. 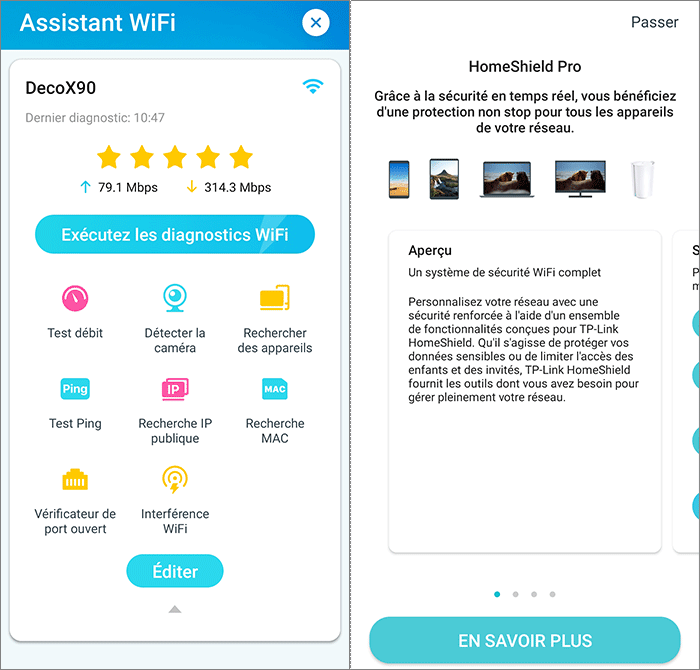 In the paid version, in network protection, you will have access to protection of home automation devices, against DDos attacks or even intrusion prevention by Port. In the area of ​​parental control, always paying, you can set time limits for the use of each child’s profiles, but also different disconnection times depending on the day. It will even be possible to distribute kinds of digital vouchers that give access to additional connection time! Finally, by paying, analysis reports and security advice will be infinitely more detailed. 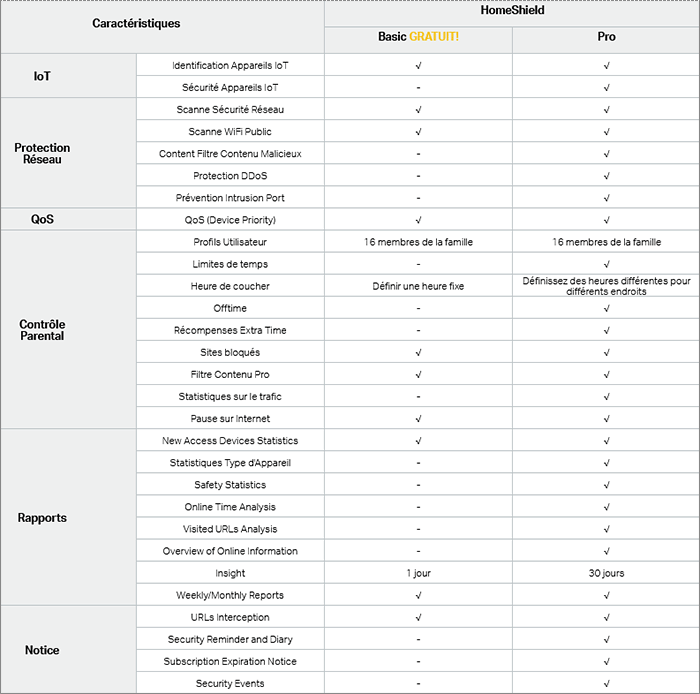 If you stay in the standard version, you will still have access to a lot of features, such as the network analysis function, which diagnoses the performance and security of the network. Your application is also able to tell you if there are too many users or not, if your password is too weak, etc. Also as standard, you will have access to parental controls with up to 16 distinct profiles and 32 devices per profile.

For less money, but also much less provided in home automation functions, we recommend the X60, very efficient and equipped with Wifi 6. If you are not convinced by this new standard, and you wish to add CPL (power carrier line), you might be interested in the Devolo Magic 2 Wifi next.

With its new payment service, GoDaddy wants to compete with Shopify

With its new payment service, GoDaddy wants to compete with Shopify