Developed by Rainbite and published by Eastasiasoft Limited, Trigger Witch was released on Playstation 4 and Xbox One on July 28, and the next day on Nintendo Switch. In addition, the game is also playable on Playstation 5 and Xbox Series X | S, but is currently not available on PC. After attracting our attention with its demo last June during the Xbox Summer Game Fest, it’s time to take a closer look at this title which seemed promising to say the least!

Trigger Witch is a game accessible to all: the initial difficulty gives an adventure that does not really offer a challenge, but it is possible to modify certain parameters such as the damage inflicted or suffered, handicaps for aiming, and we finds many accessibility options such as piñata mode which deactivates the blood, settings for the text, as well as the possibility of freely reconfiguring each button of the controller.

The title makes us embody Colette, a young witch about to try her luck in the Lacrosse Challenge, an exam that will allow her to join the Cartouche if she succeeds. Following in the footsteps of her mother who is the village’s Grande Mire, Colette wishes to assert herself as a witch and help preserve peace in the kingdom. Long ago, a Great Detonation made a portal appear near the village of Ozryn where Colette lives, and from which firearms appeared. Far more powerful than witch magic, witches felt that guns should not be the subject of a race for power, and erected a magical barrier dividing the kingdom into two, witches to the south and goblins to the south. North.

Scenaristically, Trigger Witch is not complicated and takes us from dungeon to dungeon in order to respond to a single problem that arises very quickly once past the Lacrosse Challenge, dungeon serving as a tutorial. The game is simple and done more in kindness, with dialogues tinged with enthusiasm and characters who do not ask themselves many questions, even for those who do not particularly like you. 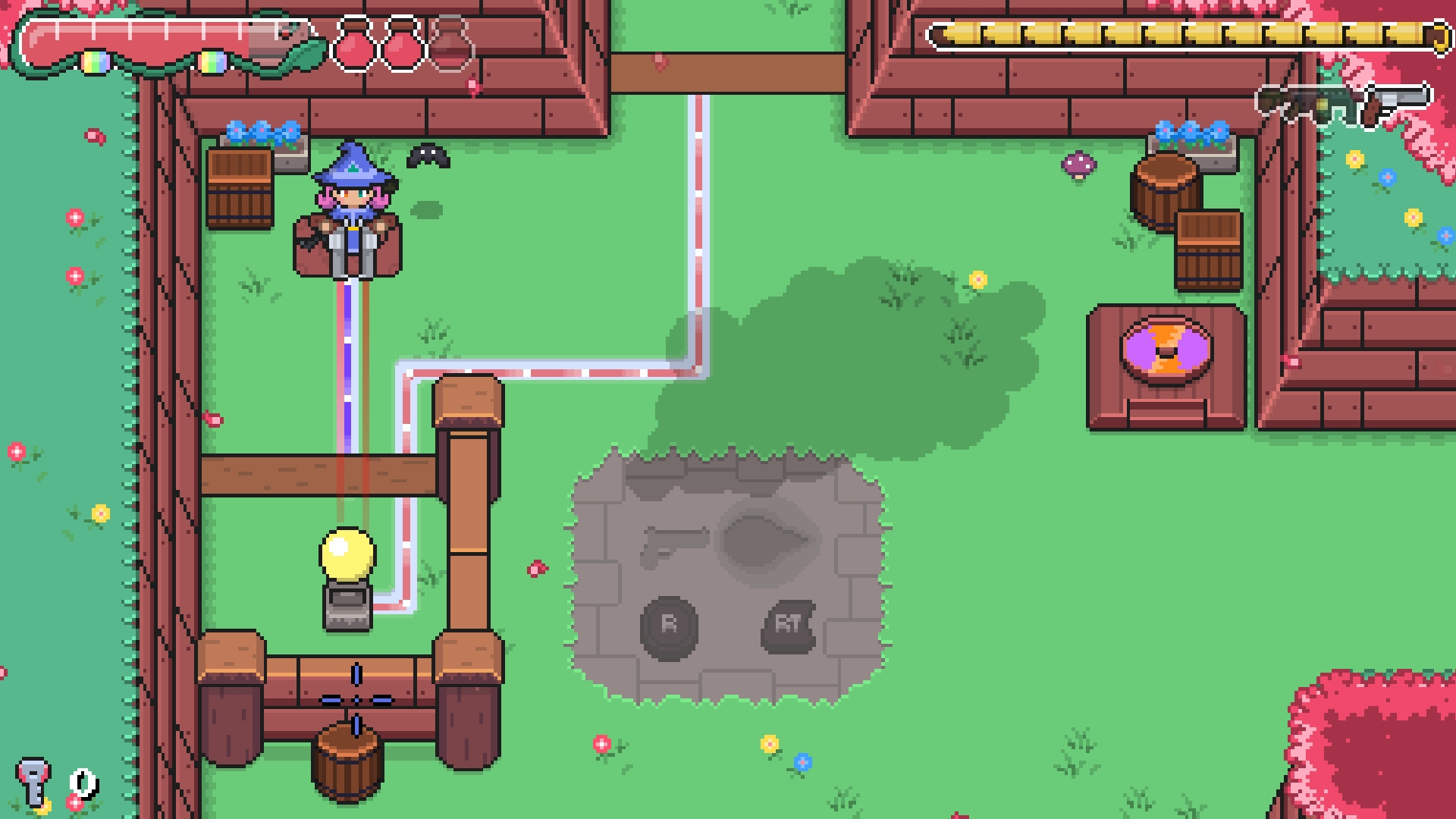 The first dungeon lays the foundations for the puzzles to come.

An atmosphere that is also transcribed in the gameplay: if the first dungeon serves as a tutorial by presenting the weapon system and some puzzles playing on the aim, it is a shame to see almost no renewal or deepening in these mechanics, if not two or three exceptions in some dungeons.

Colette has a magic dash to dodge, but above all a classic revolver, the only weapon that she can reload manually, and your gear grows at the rate of an additional weapon for each dungeon visited. These other weapons recharge automatically while another is used, and all can be upgraded in exchange for weapon parts, to be found in chests scattered throughout the kingdom, and gems, the in-game currency. that we collect in chests or by killing enemies. 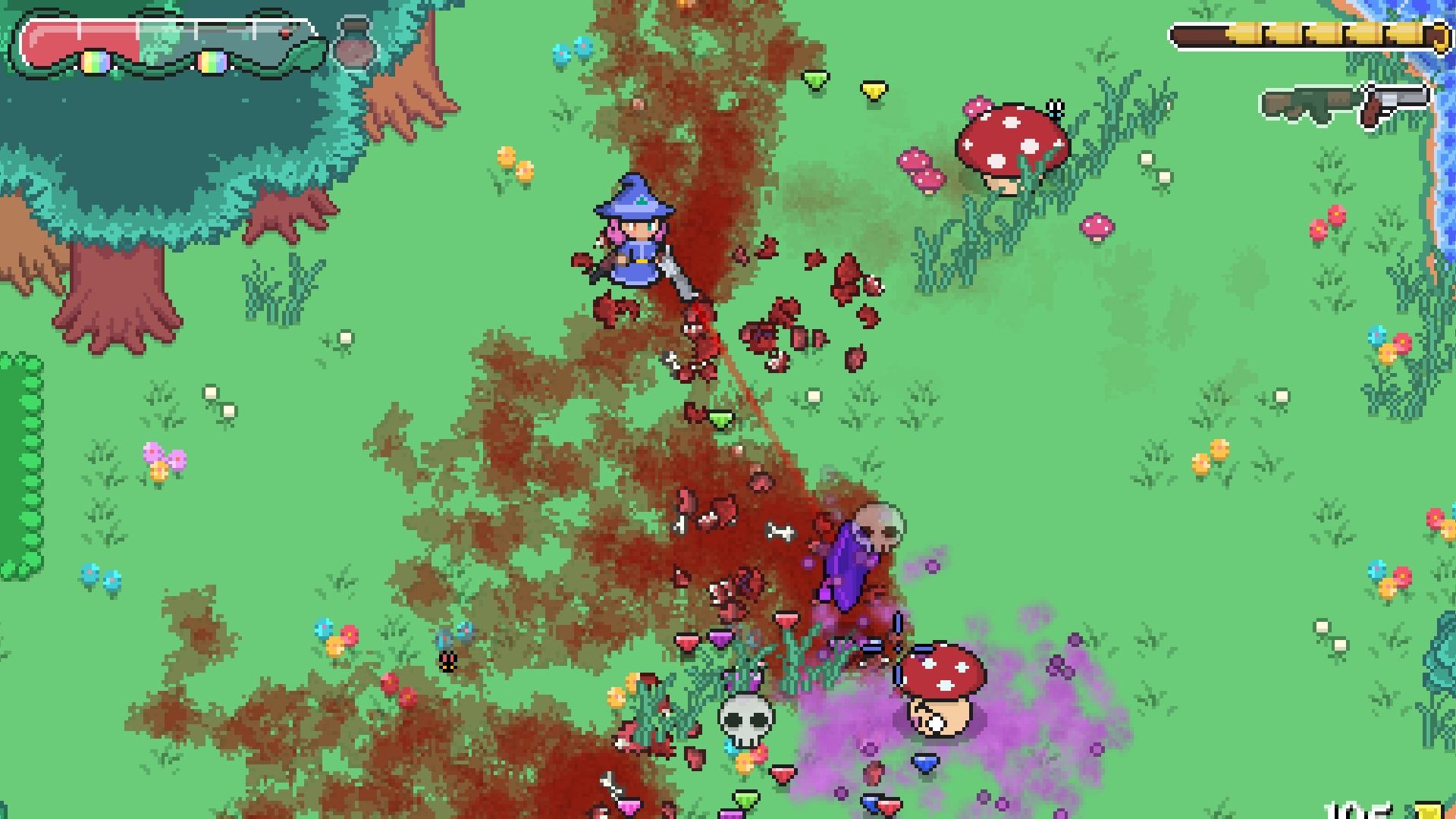 The fights quickly turn to the butcher’s shop.

If Trigger Witch is of course inspired by Zelda in its formula, the gameplay in twin stick shooter brings a little more nervousness to it as well as something to disorient the player: we have fun throughout this improbable mixture of fantasy universes. and firearms, to a funny and surprising ending.

The bosses benefit from a polished staging, but as long as your revolver is thoroughly improved you will come to the end very quickly and therefore will not have especially time to enjoy the fights. What is even more true with the basic monsters, which will never pose a problem and will be especially there to provide you with gems. Note that the environments are teeming with life, with many small enemies all over the place, so that many will surprise you around a bend and make you pity not to have advanced by pulling straight in front of you.

Finally, a few flying broom phases will be unpleasant, given that during these phases it is not possible to direct the shot: our weapon necessarily points in a straight line, limiting our field of action even though the broom is offering us greater freedom of movement, which therefore cannot be fully enjoyed. 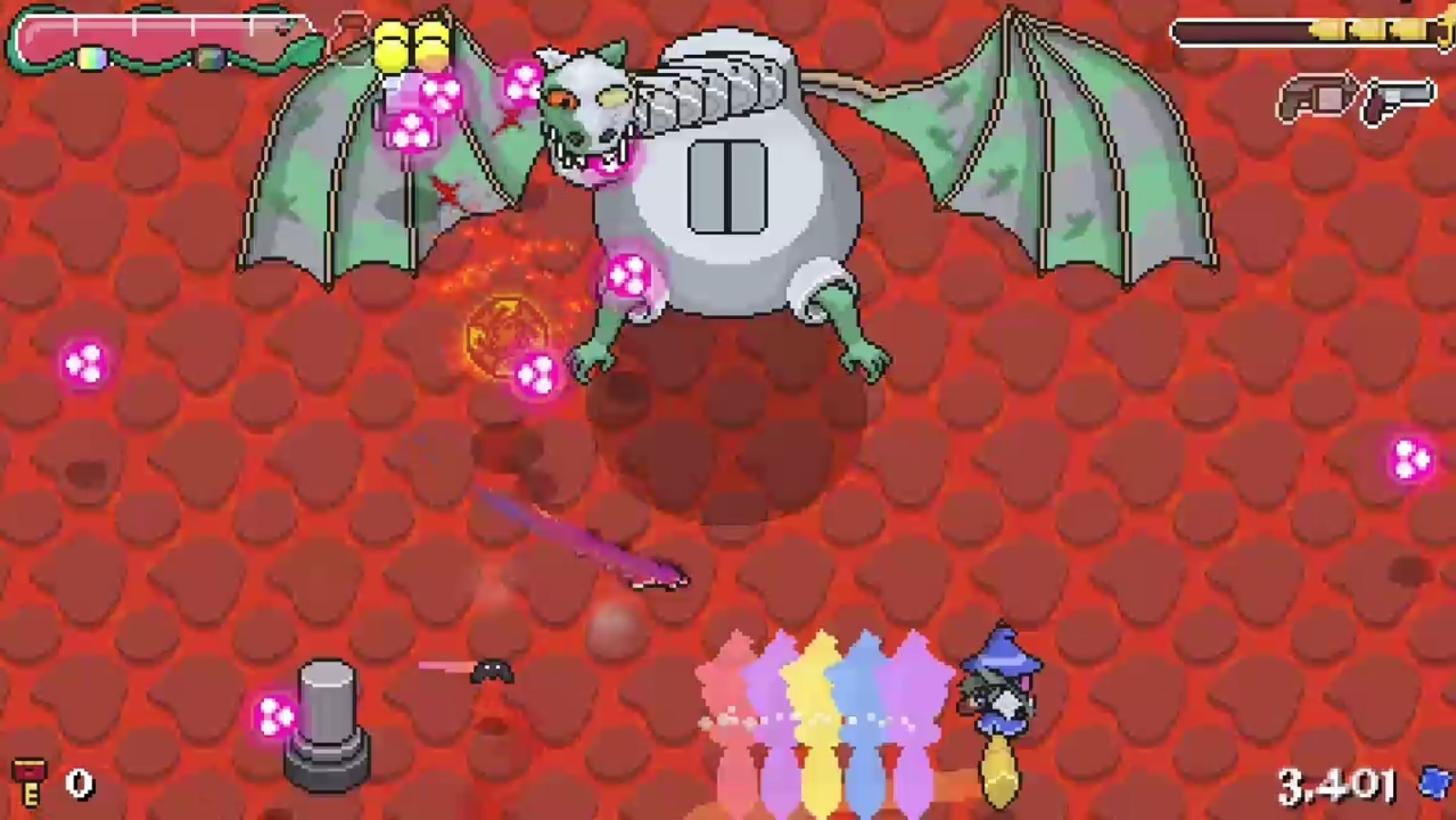 The bosses are well staged, but the first introduces us to the broom, an unpleasant mechanism …

Trigger Witch does not shine with its plot or its dialogues, but its artistic direction is particularly effective, whether in the care given to the pixel-art graphics and the abundant animations. The cartridges fly on the screen but also on the ammunition bar of the interface, Colette leaves footprints in the snow and the sand and re-combs when you are inactive too long … Let us also mention the music which manages to never tire despite the many back and forths, sometimes offering angry rock during the fights, sometimes more melodious themes once the enemies are defeated.

Indeed, except in the dungeons where some teleporters allow us to move quickly, Trigger Witch only offers a point of rapid movement located in the village of origin, suitably placed in the middle of the world map. What slightly lengthen the lifespan, however short, of the game, since it can be completed at 100% in just nine hours despite the many trips you will make on the world map to discover all the secrets. An objective also facilitated by the merchants of the game, who offer maps to reveal the location of each secret in the different environments. 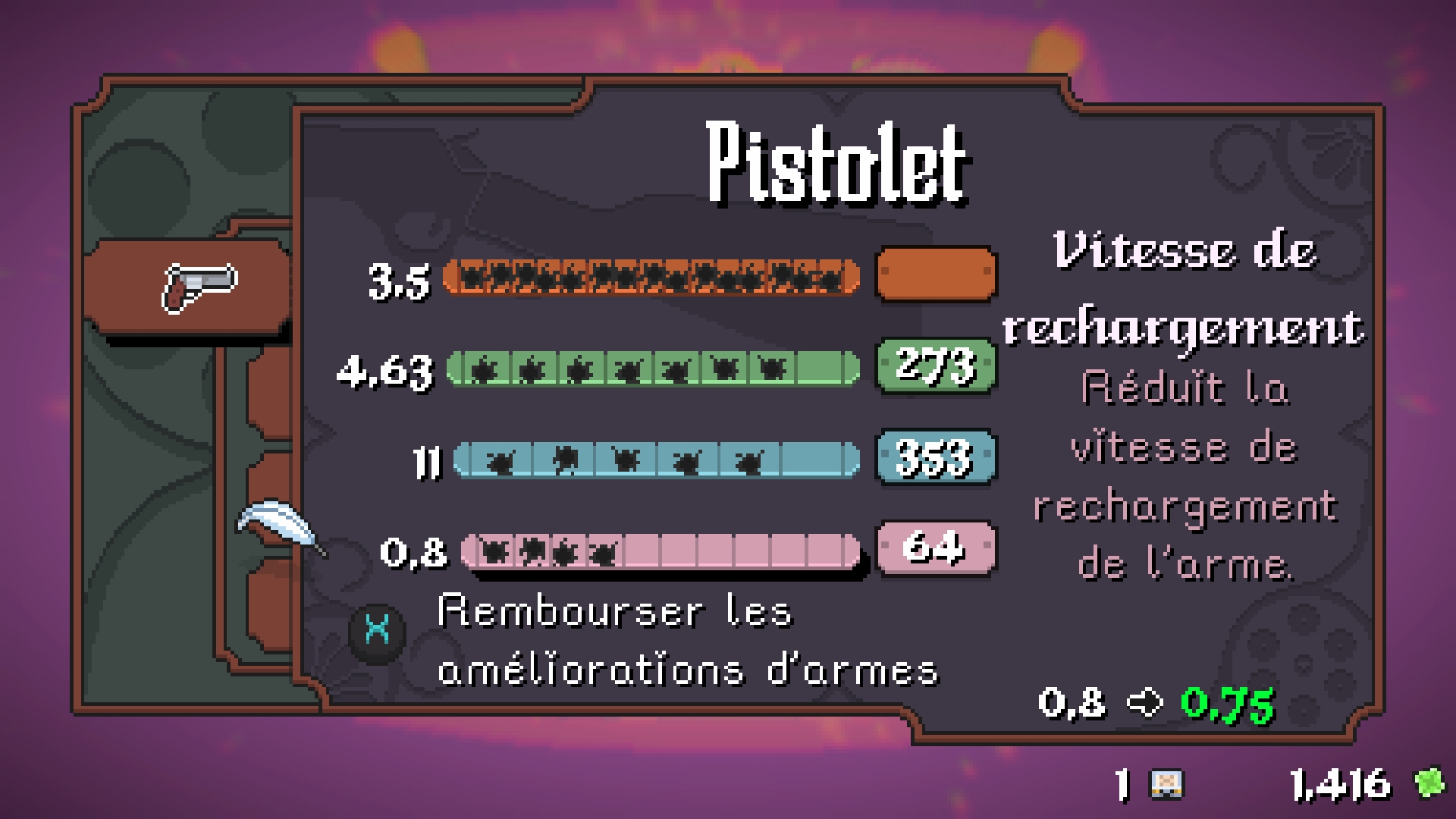 You have not yet had the test!

ConsoleFun gives you the possibility to enjoy your favorite articles by clicking on the heart above. Take part in the community life of the site and show your interest in our news, for even more fun!

Vesperia: Co-Head of the “Tests” section 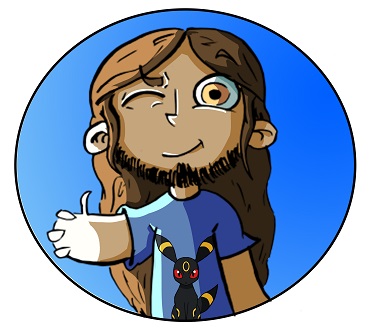 A 22-year-old player, I try to catch up with years of video game culture to understand the why and how of each game. This takes me a lot of time and makes me fall further behind. I just love video games.