As the world produces more and more electricity from intermittent renewable energy sources, there is a growing need for technologies that can capture and store energy during times of low demand and quickly release it when needed. Now scientists are proposing a long-term energy storage solution based on underground gravity energy storage, a method of turning abandoned mines into gravity batteries. A solution to the energy and climate crisis as a giant coal mine expands in Germany, threatening a nearby forest.

The transition to low-carbon energy, which is taking place around the world, is primarily driven by the integration of renewable energy sources such as wind and solar energy. However, these renewable sources are variable and fickle. They produce energy efficiently when the sun is shining or the wind is blowing, but when there is too little light, for example, production is severely limited or even stopped.

For many experts, the growing demand for energy will mean the creation of lithium batteries (and other types of rare earth batteries) of ever larger sizes. But in the long run, resource depletion and the impact of resource extraction on the environment are not sustainable. Others are promoting the green hydrogen revolution, so its effectiveness is limited. Finally, some completely abandon chemistry and turn to the unlimited energy available everywhere and to everyone, resulting from gravity.

So recently, an international team of researchers led by IIASA (International Institute for Applied Systems Analysis) in Austria developed a new way to store energy by transporting sand to abandoned underground mines. The new technology, dubbed Underground Gravity Energy Storage (UGES), offers an efficient solution for long-term energy storage at millions of now-defunct mines around the world. Their work has been published in Energies magazine.

You should know that the gravitational battery is based on a simple principle emphasized by Newton: gravity, everything that goes up must go down. This particular battery allows you to lift a significant load when the grid generates excess energy (for example, a very sunny day and low demand). When demand on the electrical grid increases, the battery injects stored energy by shedding the load (by gravity) and an appropriate alternator converts that energy into electricity fed to the grid.

One application of this principle is in a pumped hydroelectric power plant. In this configuration, water is ejected from a great height, generating electricity by rotating turbines as it flows down. When there is excess energy, this water is pumped back to the starting point.

In this study, the cargo used by the electric train is sand and the configuration is abandoned mines. The sand went down there to generate power when demand was high, and then moved up (like ore) when there was excess power on the grid.

The advantage here compared to chemical batteries is that the self-discharge rate is zero. In other words, there is no energy loss in this process, unlike conventional batteries, which self-discharge. In addition, the use of sand as a storage medium reduces any risk of contaminating groundwater resources, unlike the underground pumped storage pump alternative.

As mentioned earlier, UGES is a gravitational energy storage technology that involves filling an underground mine with sand to generate electricity when the grid needs it, and then extracting the sand from the mine to store energy when electricity is redundant (and cheap).

The principle of operation of the UHES installation. © J. Hunter et al. 2023

The main components of the ESMU are the mine, motors/generators, upper and lower storage areas and mining equipment.

Julian Hunt, researcher for the IIASA Energy, Climate and Environment Program and lead author of the study, said in a statement: “The mines already have basic infrastructure and are connected to the grid, which significantly reduces costs and facilitates the introduction of UHPP installations.”

It should be noted that the number of closed or abandoned mines is difficult to estimate, but is likely to be in the order of millions of sites worldwide. Not to mention that old mines, exceptionally small and located far from populated areas, are rarely documented, and some abandoned mines are found only in the event of an accident. Moreover, the use of some of them can also reduce their environmental impact by cleaning them of pollution before their new use.

Julian Hunt notes: “When a mine closes, thousands of workers leave. This devastates communities whose economic production depends solely on the mine. UGES will create several vacancies as the mine will provide energy storage services after the closure of operations.”

The technical interest of these mines is that the open pit at UHES has different depths and diameters. The deeper and wider the shaft, the more power the unit extracts. In addition, the larger the volume of the mine, the higher the energy intensity of the station.

The authors explain that to maximize capacity, the sand tanks in the well take up about 50% of the volume. The remaining 50% of the space is needed to fill and empty the sand containers. To reduce the cost and number of cables supporting the containers, as well as the load on the motors/generators, they offer multiple motors/generators throughout the mine.

It should be clarified that containers are independent, i.e. each module can be commissioned or removed independently (for full loading and unloading), ensuring that the system does not stop due to the installation or removal of supports. In addition to autonomy, the container must provide fast loading and unloading of sand. Thus, it is proposed to install loading stations, “which, according to the authors, may be similar to lift stations.” 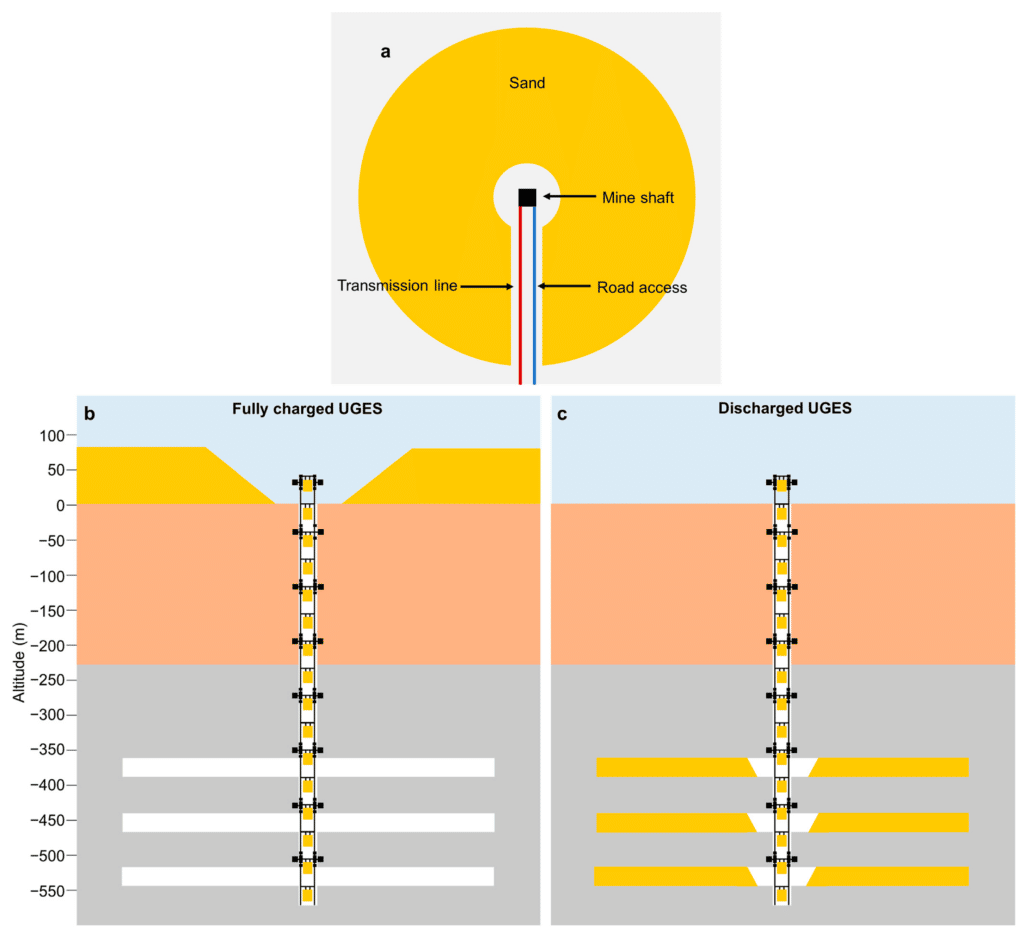 Proposed scheme for the upper storage of the UHES plant, designed to store as much sand as possible on the surface surrounding the mine shaft, in order to minimize the energy required to store sand on the surface. (a) Circular sand storage around a mine shaft. (b) and (c) factory configuration loaded and unloaded. © J. Hunter et al. 2023

The investment cost of UHPP is about US$1-10/kWh, while the electrical capacity costs US$2,000/kW. The technology is estimated to have a global potential of 7-70 TWh, with most of this potential concentrated in China, India, Russia and the US.

Behnam Zakeri, study co-author and IIASA Energy, Climate and Environment Program researcher, concludes: “To decarbonise the economy, we must reimagine the energy system with innovative solutions using existing resources. Turning abandoned mines into energy storage is one of the many solutions that exist around us, and we just need to change the way they are deployed.”

This study echoes current events, with the “discovery” of the expansion of a giant lignite mine (the most polluting type of coal) in Germany following the expropriation of an entire village. In times of energy transition, the discovery of new mines remains a global disaster and heresy for the climate.