Twitter as a witness to the transformation taking place in Silicon Valley and with it on global digital platforms. This second post sums up the first changes made by his highly publicized new boss. Elon Musk.

First post two months ago GreenSI pointed out that the Twitter we’ve known since it launched in 2005 is dead. 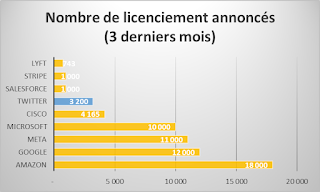 Twitter has not found its balance when all social networks were financed by over-targeted advertising and exploitation of personal data. Too late !
This economic model is now being questioned from all sides. Job cuts in Silicon Valley in anticipation of a global crisis and breakdown of AI models echo Twitter’s drastic downsizing (half the staff).

And yet, two months after Elon Musk’s “muscular” takeover, the platform is still spinning and evolving, while many predicted its imminent end. GreenSI always believe in the ability Twitter to bounce back and evolve, with the future models of Silicon Valley.

One such model is a subscription based on granting privileges to a subset of users in exchange for a monthly subscription. The first test was made to suggest having a “certified account” (Twitter Blue) with a badge of recognition in the profile. It only had the name “certified”, since anyone could buy it. Thereby, this subscription is closer to Amazon’s “Prime” being a great user than the old certified accountintended for famous people, officials or journalists. The confusion still exists in some minds, but Twitter has turned the page.

As we suspected, this was only the first step, because Elon Musk just announced this week, a future subscription that will allow you to no longer have ads. The price should be higher.

Here we find the model netflix which launched streaming into the commercialized world of American television (an ad break can be every five minutes!). It is interesting to note that netflix will also develop its model, but vice versa, by lowering the price, if you want advertising.

So Twitteras netflixwant to balance their income between paid subscriptions and ad funding for free access. According to Elon Musk, the turnover in 2022 will be $3 billion, that is, a drop of more than 40%. This allows us to estimate that Twitter’s target revenue from followers is between 20% and 30% after some advertising is restored. Indeed, revenue in 2022 has been impacted by the departure of some large advertisers who have not appreciated the shift to greater freedom of expression, in particular people previously blocked from the social network.

This “new” Twitter model is a well-known “freemium” model! Developed in the 2010s and featured in a help article in Harvard Business Review10 years ago (!), from Vinit Kumar (“Make Freemium work”).

In this model, the subscriber curve does not immediately skyrocket with an offer that is initially attractive to only a small fraction (“early adopters”), but develops over time. So the flow of news now to be followed on Twitter will make Elon Musk win or not, his bet. New features that should convince you to subscribe.

come back to Amazon, early Prime users wanted to save on shipping and get a better service. Today, leaving Prime means, among other things, giving up a video-on-demand service as rich as the competition or unlimited photo storage.

facebook is another social media player undergoing forced change as its share price has fallen nearly 3x from its mid-2021 high. facebookbecame Meta, presented as the trajectory of its evolution, the creation of a virtual universe (Metaverse). It aims to develop its economic model with the sale of equipment (3D), the valuation of its users’ assets (NFT) and the commission for virtual transactions (cryptocurrency). It may also charge entry fees to certain “preferred” parts of Horizon World, which will be equal to a Freemium model subscription.

GreenSI doesn’t believe it yet, as stated in several posts, but shows that the model of a social network entirely financed by advertising is certainly doomed in the long run.. The fragmentation of the global Internet, whether we are comparing speeds, rules, or freedoms, is in full swing (US, Europe, China, Russia, etc.) and shares the potential of networks previously integrated into GAFA scores. Adapting to every context, or even tomorrow, when each country wants more sovereignty over its fellow citizens’ data, will no longer allow economies of scale on technical platforms. Less income, more expenses…

One An Apple is seen by the market as capable of revitalizing the 3D virtual universes and perhaps the modes of sharing that will develop “after Tik-Tok and Instagram” that Méta sees in its virtual universe. Like what happened to the iPhone with smartphones.

An Apple has used a model based on hardware and the percentage of app transactions sold in its closed universe from the beginning. It has been little influenced by the evolution of the economic models of social networks. On the contrary, he can contribute to his development by transferring the value of his brand to private spaces by subscription. Its VR headset is lagging behind, but still announced for the end of the year. This is a signal to take off or not virtual universes, because sales of other manufacturers are not growing.

So Twitter has two years ahead, with the social sharing model and the Freemium economic model as we know it. These models may be changed by future collaborative virtual universes, but they won’t show their faces right away, and it’s even more likely that the disruption caused by generative AI will happen sooner.

Finally, the subscription champion still remains Amazon. He does not publish his figures, but nevertheless indicated that he had 200 million paying Prime members worldwide by the end of 2020. About the same number of Twitter users (in April 2022 there were 229 million, but since then there have been purges of inactive accounts). Per GreenSI this is definitely the inspiration model that the Twitter boss has in mind.

Now let’s wait for new opportunities. The recent ban on external apps that used its API is a sign that Twitter wants to keep control of it because its model depends on it.