Strong winds and heavy rains hit China’s east coast on Thursday, while Typhoon Muifa prompted a precautionary evacuation of more than a million people and flight cancellations in Shanghai.

However, no deaths, injuries or serious damage were reported by authorities, in part because numerous preventive measures were taken.

Muifa was the worst typhoon to hit Shanghai, China’s most populous city of 25 million, since at least 1949, according to state broadcaster CCTV.

Faced with the risk of flooding or damage to homes, 426,000 Shanghainese have been preemptively evacuated to safety, as have 1.26 million residents in neighboring coastal Zhejiang province (east), the network said.

Chinese media broadcast videos of Shanghai police in fluorescent yellow uniforms going door to door in old neighborhoods before loading residents onto buses and placing them in gyms.

Muifa made landfall in Shanghai on Thursday evening around 12:30 pm (4:30 pm GMT on Wednesday), causing wind gusts to reach 125 km/h.

The manager of the city’s two main airports, Pudong and Hongqiao, had already announced on Wednesday evening the cancellation of all flights at two locations due to the approaching typhoon.

A total of 665 flights have been canceled from the metropolis, CCTV reports.

On Thursday, the manager of Shanghai Airports did not release any traffic news.

But as the typhoon moves away from the city, flights seem to be slowly resuming, though most have still been cancelled, according to dedicated website Flightradar24.

The major ports of Shanghai, as well as Ningbo and Zhoushan in Zhejiang Province, announced on Thursday morning that they would resume container loading during the day.

The typhoon continues to move north along the coast of eastern China. It is currently located in Jiangsu Province, north of Shanghai. 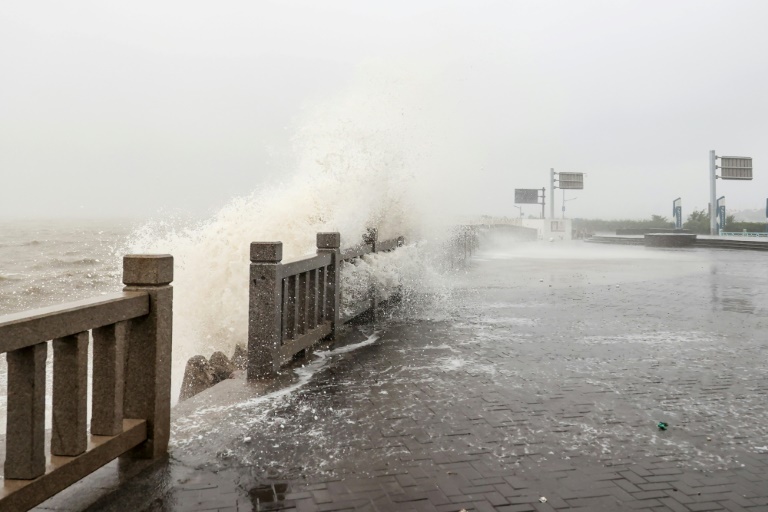 Its power will “gradually weaken” due to winds now blowing at “about 90 km/h”, according to the National Weather Service.

Many preventive measures have been taken in Shanghai.

According to CCTV, about 260,000 government-authorized agents have been dispatched to inspect more than 4,300 construction sites, 10,000 residential areas and even 64,000 store signs to avoid any accidents in the event of high winds.

Muifa is the 12th typhoon to hit China this year, according to state media.