At least 75 people were killed in the Philippines during Typhoon Rai, the strongest to hit the country this year, according to official reports released Sunday, as relief efforts try to deliver food and water to the devastated islands.

The governor of the tourist island of Bohol (center), Arthur Yap, announced on his Facebook page that 49 people had died and 10 were missing in his province, according to data communicated by the mayors, raising the death toll to 75 in total tentative for disaster.

“Communications are still cut off. Only 21 of the 48 mayors have contacted us,” he said.

The typhoon, accompanied by winds of up to 195 km / h, hit the central and southern Philippines on Thursday and Friday, destroying rooftops, breaking utility poles and cutting off communications, before leaving for the sea on Saturday from southern China.

Aerial photographs released by the army showed considerable damage in the crossed areas and some 300,000 people had to flee their homes.

Thousands of military, police, coast guard and firefighters have been deployed to the worst affected areas to assist in search and rescue operations.

Heavy machinery is also dispatched to the site to clear paths blocked by trees and utility poles.

A Philippine Navy ship delivering emergency aid is due to go to Bohol on Monday, Yap said after declaring a state of calamity on the island.

Tree uprooted in Naga in Cebu province in the Philippines after Typhoon Rai struck on December 17, 2021 (AFP – Alan Tangcawan)

An overview of the affected areas showed “very clearly that our fellow citizens have suffered a lot in terms of destroyed houses and agricultural losses,” he lamented.

Thousands of gallons of water were delivered after power outages on the island disrupted gas stations, Yap added.

The islands of Siargao, Dinagat and Mindanao have also suffered significant destruction.

Aerial images released by the military show severe damage in the town of General Luna on the island of Siargao, where surfers and vacationers had flocked for the Christmas season, with roofs ripped off and debris on the ground.

On the island of Dinagat, the damage is “equivalent, if not worse”, to that caused by super typhoon Haiyan in 2013, according to the province’s governor, Arlene Bag-ao.

Haiyan, called Yolanda in the Philippines, was the country’s deadliest cyclone, killing 7,300 people.

In the city of Surigao, on the northern tip of the island of Mindanao, shards of glass from broken windows, corrugated roofing sheets, electrical cables and other debris were scattered on the streets. 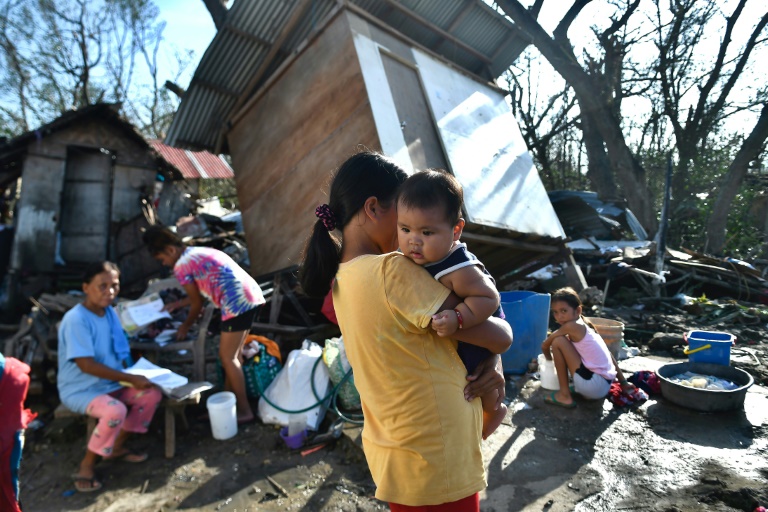 Inhabitants near a house destroyed by typhoon Rai, in Carcar, in the province of Cebu in the Philippines, on December 18, 2021 (AFP – VICTOR KINTANAR)

It reached the South China Sea on Saturday and was heading towards Vietnam.

Rai is a particularly late-season typhoon. Most tropical cyclones in the Pacific Ocean form between July and October.

Scientists have long warned that typhoons are getting stronger as man-made global warming accelerates.

The Philippines, ranked among the countries most exposed to climate change, is hit by nearly 20 tropical storms or typhoons each year, typically destroying crops, homes and infrastructure in already poor regions.