Commonly used in beauty salons and also sold to the general public, nail polish dryers can be more dangerous than they seem. A study by scientists at the University of California San Diego shows that frequent use of these devices can lead to cell damage and carcinogenic mutations.

In the ultraviolet (UV) range, UVA has the longest wavelength (315-400 nm). They make up about 90% of the UV radiation that reaches the Earth’s surface and penetrates deep into the dermis. They are responsible for the tanning of the skin when exposed to the sun. But we do know that they also generate free radicals, which can accelerate skin aging and damage skin cells, even promoting cancer. The International Agency for Research on Cancer has classified broadband UV-A as a Group 1 carcinogen, and studies have already shown that tanning beds that use UV in the 280 to 400 nm range are carcinogenic.

On the other hand, no experimental evaluation has been made of the effects of UV radiation emitted by nail polish dryers, typically between 340 and 395 nm, on mammalian cells. “If you look at how these devices are presented, they are positioned as safe, there is nothing to worry about. But as far as we know, no one has really studied these devices and how they affect human cells at the molecular and cellular level so far,” said Lyudmil Alexandrov, professor of bioengineering, cellular and molecular medicine at the University of California, San -Diego and corresponding author of the study. studying.

UV nail dryers are used to cure and dry certain varnishes called gels, which are oligomers that require exposure to UV rays to cure into polymers. In most cases, nails and hands are irradiated for up to 10 minutes, and regular users change their gel manicure every two weeks, the researchers say. Given the duration and frequency of use, it was important to determine if these UV devices posed a risk.

This study was particularly motivated by the fact that a number of reports published in medical journals mentioned cases of very rare skin cancer on the fingers of gel manicure users, such as cosmetologists and beauty pageant candidates. Therefore, it is likely that these cancers were caused by the use of UV devices.

So as part of their study, the team irradiated in vitro three different cell lines — adult human skin keratinocytes, human foreskin fibroblasts, and mouse embryonic fibroblasts — to assess the DNA damage and mutagenic effects of UV radiation emitted by a nail dryer. Each primary cell line was irradiated once, twice or three times, the duration of each irradiation varied from 0 to 20 minutes.

Mutations identical to those seen in skin cancer. 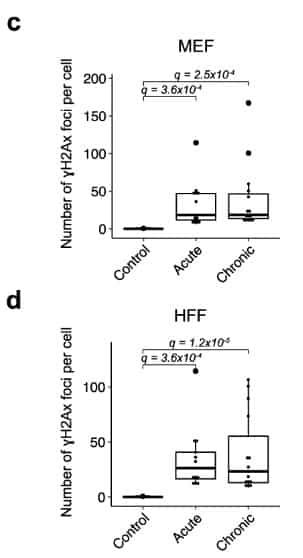 Whether the exposure was acute or chronic, there was a significant increase in γH2Ax foci in cells compared to controls – γH2Ax is a known marker of DNA damage and repair. © M. Zhivagi et al.

In both cases, the researchers noticed that UV exposure led to an increase in reactive oxygen species molecules known to cause mutations. In addition, the observed mutations showed a pattern identical to that observed in patients with skin cancer.

“First, we saw that the DNA was damaged. We have also seen that some of these damages do not recover over time and lead to mutations after each use of UV nail dryer, ”concludes Alexandrov. UV exposure can also cause mitochondrial dysfunction, which in turn can lead to additional mutations.

“This study demonstrates that the radiation emitted by UV nail polish dryers can both damage DNA and permanently eradicate mutations in the genomes of primary mouse embryonic fibroblasts, human foreskin fibroblasts, and epidermal keratinocytes,” the team concludes. Maria Zhivagui, a researcher in Alexandrov’s lab and the first author of the study, was herself a fan of gel manicures. She said she quit the practice after seeing the results of the experiment.

The harmful effects of repeated use of these devices on human cells are now undeniable. However, a long-term epidemiological study is needed to conclusively state that their use leads to an increased risk of skin cancer, the researchers note.