Bimbo (Centrafrique) (AFP) – Marie-Chantal is waiting for her injection. “But only because they asked me to,” grumbled the fifties, resigned, before rolling up her sleeve. The Central African Republic has only vaccinated 7% of its population against Covid-19 so far.

For the health authorities of this vast country, the second least developed in the world according to the UN and in civil war since 2013, the challenge is both to obtain the vaccine and to convince people of its need.

In the humid heat of the small hospital in Bimbo, on the outskirts of the capital Bangui, Marie-Chantal was finally convinced, like the ten people waiting to receive a dose.

If the population in Bimbo is gradually adhering to vaccination, it is thanks to awareness-raising efforts, in particular by the international NGO Alima (The Alliance for International Medical Action), which operates mainly in Africa and carries out vaccination campaigns in areas of Hard access. reach areas.

“At first, people were reluctant, we relied on community relays to convince them,” explains Grévisse Kahindura, Alima’s vaccination coordinator in the country.

Hospital facilities are incomplete. Wearing her blue blouse and behind her goggles, Larissa Tongoma pulls on her gloves before pulling a dose of Johnson & Johnson vaccine from a small cooler on the table. The label with a red cross is worn by transport and dust.

“I vaccinated 43 people today,” the nurse boasts, disinfecting the 28-year-old Prince’s arm before biting him and asking him to join a group to watch for immediate side effects.

“Many people do not believe in the existence of the coronavirus,” laments the chief doctor of the Bimbo district hospital, Pétula Mandaba. “During the awareness campaigns we discovered a town where the pastor had said that the covid was an invention. It was impossible to convince the population to get vaccinated, ”he says.

In Africa, reluctance is felt “almost everywhere, although they are different from one country to another,” explains Mélanie Tarab, Alima’s Africa medical manager. “It is more difficult to vaccinate in urban areas, where the population has access to false news on social networks, than in rural areas,” he explains.

In the streets of Bimbo, the epidemic is calm. Masks are mandatory only to enter the official buildings in Bangui, a few kilometers to the north. The Ministry of Health has distributed two million masks, but “no one uses them,” laments Richard Fotsing, WHO health coordinator in Bangui.

The figures presented by the ministry are relatively low, with only 12,000 cases for almost 5 million inhabitants and 101 deaths since the start of the pandemic, but probably underestimated. “The covid statistics that emerge only come from health centers,” explains Mr. Fotsing.

More generally, in Africa, notification of coronavirus cases is low, linked to the lack of means to carry out the test, which “slows down adherence to vaccination,” notes Mélanie Tarab. 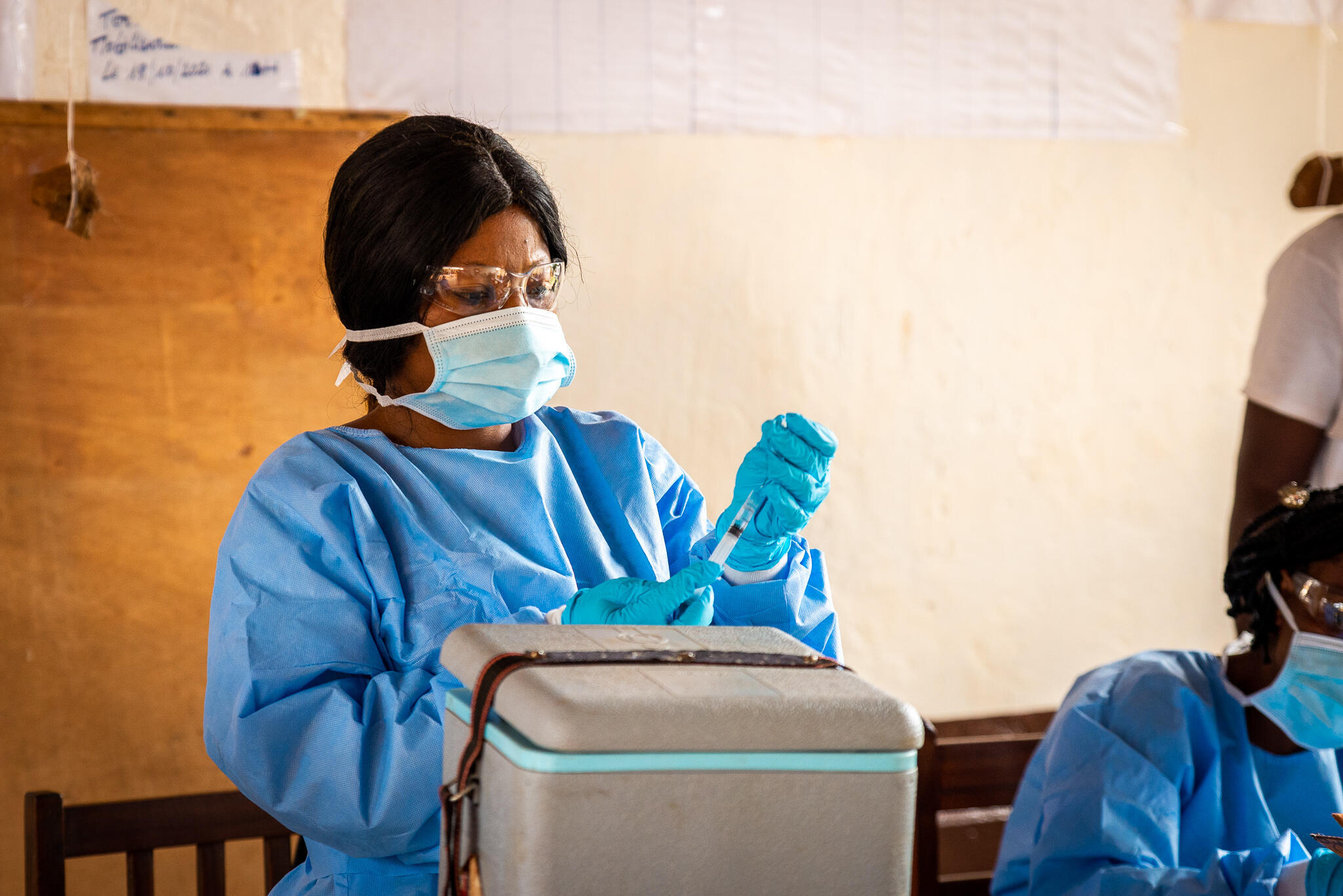 A nurse prepares a dose of vaccine at the Bimbo hospital on November 15, 2021 Barbara DEBOUT AFP

“We don’t have a system to track information when death occurs in a community, so people may think it was malaria or flu,” adds Mr. Fotsing.

And to vaccinate those we manage to convince, the logistical challenge remains considerable.

Prince is satisfied this time, but he had already arrived at the hospital and left empty-handed: “the doses were missing.”

“In Bimbo we know that 37,000 people have to be vaccinated,” explains Grévisse Kahindura at the head of Alima, who, in support of the Ministry of Health, has already vaccinated almost 23,000 people throughout the country. It invokes in particular the supply difficulties linked to the complexity of the Covax mechanism through which the international community tries to finance the delivery of doses to 92 disadvantaged states and territories around the world.

“Vaccines are leaking” in the most difficult to reach areas of the continent, laments Mélanie Tarab, adding: “and when the doses arrive, they are often close to the expiration date, it is difficult to organize a second injection.” 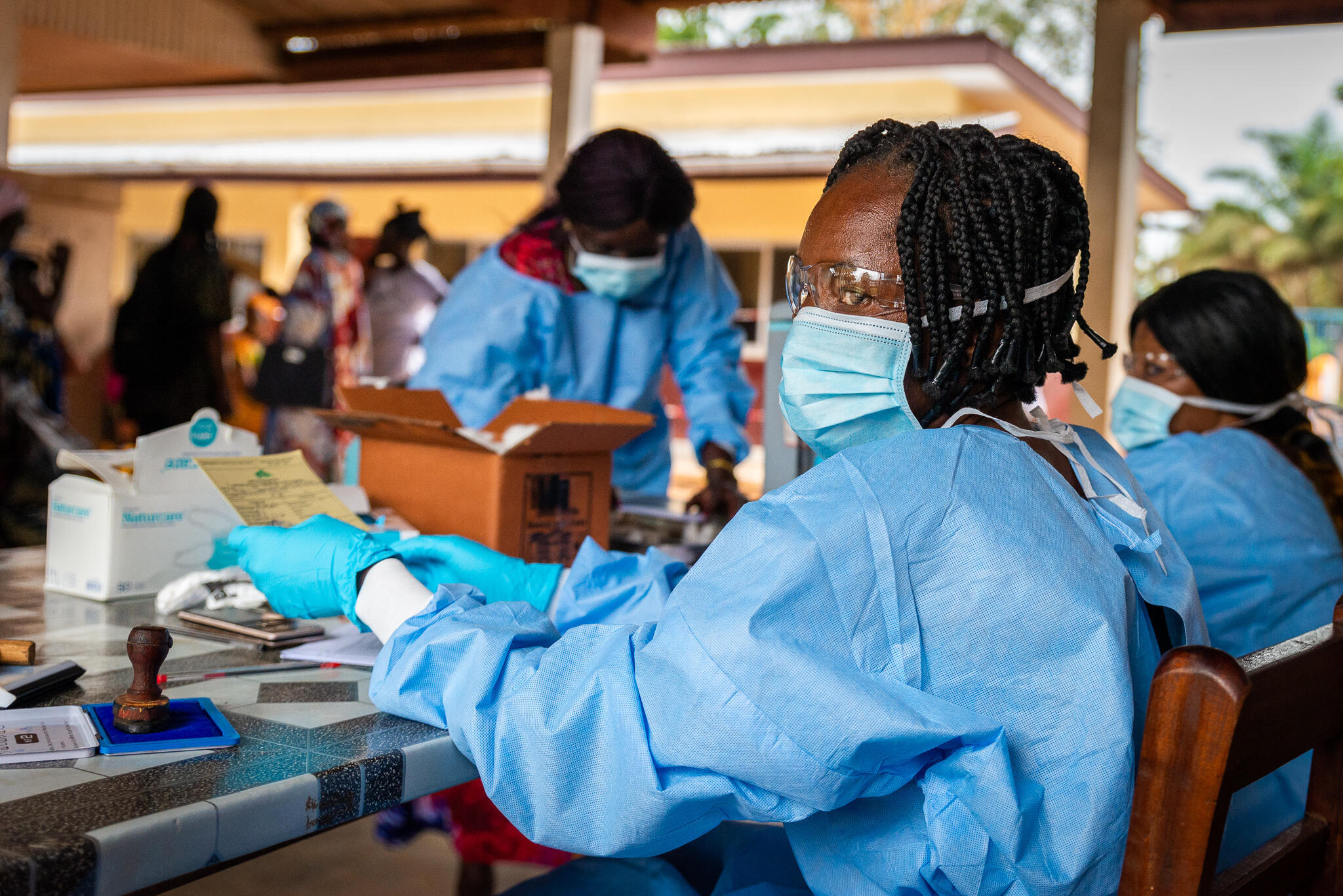 The vaccination service at the Bimbo hospital on November 15, 2021 Barbara DEBOUT AFP

In September, the WHO estimated that Africa was facing a deficit of “470 million doses”. “Less than 7% of the African population is vaccinated,” says Mélanie Tarab while stressing that it is especially the countries of North Africa and South Africa that “inflate” the average.

Return to Bimbo. Sitting on a bench among other newly vaccinated people, Prince rubs his shoulder. “Like everyone else, I was scared,” he admits, now reassured.