The Declaration of Public Utility (DUP) was signed on July 8, but the opponents of the Bure (Meuse) high-level radioactive waste disposal project are not giving up: since Friday and over the weekend, more than a thousand of them have gathered for the colorful “festival” “Les Bure’lesques”.

“We continue, we have been fighting for 30 years, this is just one more step,” trumpets 71-year-old Regine Millarakis of the Bure Stop 55 collective in the aisles of this combat mobilization in Evill (Meuse).

For Juliette Geoffroy of the Collective Against the Disposal of Radioactive Waste (Cedra), this DUP even represents a “bridgehead” for the remobilization of opponents.

Some 31 associations and collectives are also set to file an appeal “at the beginning of September” with the Council of State, according to Angelica Yugen, the Anti-Sigeo Legal Front, which brings together activists, lawyers and jurists.

The project, called the Industrial Geological Repository (Cigéo), aims to bury about 85,000 m3 of waste – the most radioactive waste of the French nuclear fleet – at a depth of 500 meters on the border of the Meuse and the Haute-Marne.

The National Agency for Radioactive Waste Management (Andra), which is piloting the project, hopes to place the first “packages” of nuclear waste there by 2035-2040.

And DUP is paving the way for Andra to expropriate the private land needed to carry out this project.

Thus, according to the organizers, about 1,500 people gathered on Saturday under six circus tents for the third edition of these “Burelesques” after a two-year break due to the Covid pandemic.

On a hilly field provided by farmers, there is a festive atmosphere and an exchange of opinions between activists of all ages from all over the country. The program includes concerts, conferences and documentary screenings, as well as a vegan canteen serving organic and local products.

Purpose: to inform the public about the “shortcomings” of the project, according to Regine Millarakis.

Around the tables in the open-air refectory, the choir begins a cappella war songs, while the rest of the participants continue their debate. 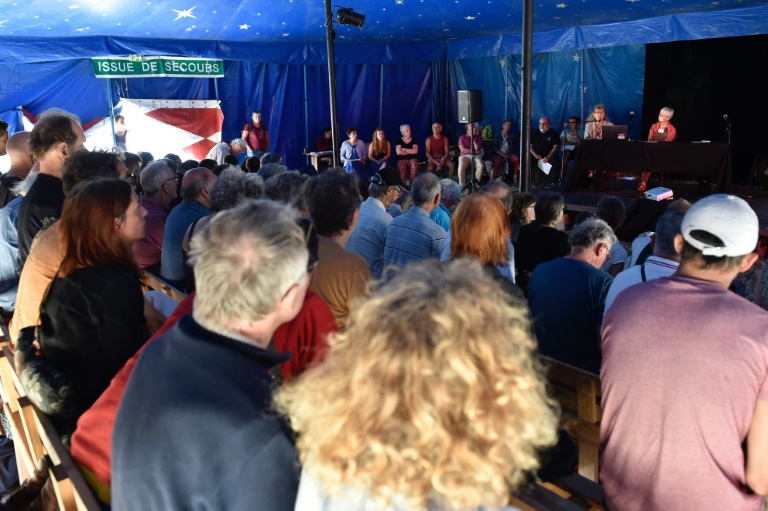 Activists of the “Bure’lesques” festival against the Cigeo highly radioactive nuclear waste storage project in Bure (Meuse) take part in a conference on August 6, 2022 in Evill (Meuse). (AFP – Jean-Christophe Verhagen)

Lucie Dubois, 23, an architecture student in Strasbourg, is coming here for the first time. She enjoys dating “people who have struggled for years” and “brings her respect”.

According to the young activist, “as long as there is no waste in Bura, we must continue to mobilize.”

“I saw that people were motivated and not going to give up,” enthusiastically says Julien Partey, 36, who is also discovering this “festival”, which takes place in a good-natured atmosphere, away from battles. activists and law enforcement a few years ago in Bura.

A “festival” that “reaches more people” than demonstrations and “restores the energy” of activists, welcomes Johan Hervelin, one of the organizers. “Locals come because they feel comfortable there.”