The World Health Organization (WHO) has detected the variant that is behind the explosion in the number of covid-19 cases in India in at least 44 other countries around the world, she said on Wednesday.

The B.1.617 variant, which first appeared in India in October, has been detected in sequences uploaded to the GISAID database “from 44 countries in all six WHO regions”, the organization says. , adding that she has received “notifications of detection in five other countries.”

Apart from India, it is in Great Britain that the greatest number of cases of contamination with the B.1.617 variant has been detected.

According to official statistics, some 4,000 people currently die each day from Covid-19 in India, where the total toll of the epidemic is close to 250,000 deaths.

India, with its 1.3 billion inhabitants, is the second most infected country in the world after the United States, with nearly 23 million cases detected.

The new wave has engulfed major cities as well as rural areas, pushing hospitals to breaking point and leading to severe shortages of oxygen and beds.

India is not the only country battling the virus, however.

Nearly half of the world’s leaders have asked for help from the United States to address the vaccine shortage, US President Joe Biden said on Tuesday. “All the countries of the world are looking to us,” he explained during an exchange with governors to take stock of vaccination in the United States. “I have 40% of the leaders of the planet who ask if we can help them,” he continued.

A caregiver administers a dose of vaccine to a woman at a vaccination center in New York on May 11, 2021 (AFP – Arun SANKAR)

“We are going to try,” he added, without providing figures or a timetable, and insisting on his desire to give priority to the Americans.

“I think we can produce a lot more vaccines,” he said.

Several heads of state or government have expressed their frustration with Washington’s attitude on this issue.

German Chancellor Angela Merkel called for “a free exchange of components” and “an opening of the vaccine market”.

French President Emmanuel Macron for his part called on the United States to “end export bans, not only of vaccines but of components of these vaccines, which prevent production”.

Joe Biden recalled that the United States had so far promised to provide 60 million doses of AstraZeneca vaccine to third countries.

However, this vaccine is experiencing new setbacks.

Ontario, the most populous Canadian province, announced on Tuesday the suspension of vaccinations with the first dose of Astrazeneca’s anti-Covid serum, due to an increase in the number of thromboses caused by the vaccine.

A few hours earlier, Alberta, another province in the west of the country, had also decided to suspend vaccination with this remedy, due to doubts about possible supply disruptions in the coming months.

Brazil for its part decided on Tuesday to suspend the vaccination of pregnant women with AstraZeneca serum while waiting to learn more about the death of a woman in Rio de Janeiro, after a thrombosis.

Slovakia followed suit on Tuesday after announcing it was examining the case of a patient who died of a blood clot after receiving the vaccine.

The European Union, for its part, claims before the Belgian courts that AstraZeneca deliver by the end of June to the Twenty-Seven the 90 million doses of its anti-Covid vaccine which were not delivered in the first quarter, on pain of financial strain, the European Commission announced on Tuesday.

This is the first time that the Commission has clarified its demands in the proceedings it has initiated against the Swedish-British laboratory, which it accuses of having failed in its obligations. The contract concluded being under Belgian law, a summary hearing (urgent) will take place on May 26 before a Brussels court.

Vaccination campaigns are continuing, however, pushing several European countries to show more confidence and begin a return to “normal life”.

In Belgium, from June 9, cafes and restaurants will once again be able to serve their customers indoors, and performance halls can accommodate up to 200 people, Belgian Prime Minister Alexander De Croo announced on Tuesday. 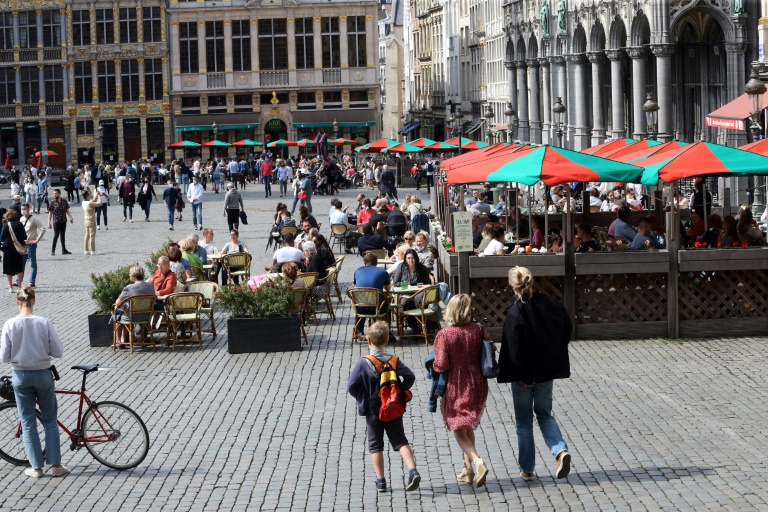 People are seated on the terrace on the Grand Place in Brussels on May 9, 2021 (AFP – François WALSCHAERTS)

Cafés and restaurants were able to reopen their terraces under certain conditions on May 8, after almost seven months of closure to stem the second and third waves of the coronavirus pandemic.

But this is the first time that a reopening date has been given to the entertainment industry as a whole.

In the vaccination campaign, “we have taken giant steps,” Mr. De Croo explained at a press conference.

The pandemic of the new coronavirus has killed at least 3,306,037 people worldwide since the end of December 2019, according to a report established by AFP from official sources on Tuesday.

Oise: Arrested near a point of sale with 2,500 euros worth of underwear and hashish, a suitcase seller pleads in good faith

New movie finds ‘the Wonderful’ aboard the space station: director’s questions and answers

Mission Inspiration4: possibly the first in a long series

Oise: Arrested near a point of sale with 2,500 euros worth of underwear and hashish, a suitcase seller pleads in good faith

New movie finds ‘the Wonderful’ aboard the space station: director’s questions and answers

Mission Inspiration4: possibly the first in a long series