Google Maps will soon show French drivers the most economical route based on vehicle type, electric, petrol, diesel or hybrid.

New economical Google Maps routes can help drivers think about how they contribute to environmental degradation. They can also help drivers cope with rising energy and fuel prices.

Now, in addition to waiving tolls, Google Maps users can set the app to “prefer economical routes” based on engine type before setting off, choosing between petrol, diesel, electric or hybrid. Google promises that Google Maps will then select the best route and most accurate fuel or energy consumption estimates.

Google is using data from the European Environment Agency to come up with this feature.

“By combining this information with key trends from Google Maps, we were able to develop advanced machine learning models,” says Rubén Lozano-Aguilera, Google Maps Product Manager, in a blog post.

Greenhouse gas emissions from heavy vehicles increased by almost 30% between 1990 and 2019.

Last year, Google launched eco-driving routes in the US and Canada. The company said in May that people had already used it to drive 86 billion miles. This feature has reduced carbon emissions by about half a million tonnes, the equivalent of removing 100,000 vehicles from the roads.

“With Eco-Routing, you can choose a route that is optimized to reduce fuel consumption, save money on fuel and reduce carbon emissions, which is a priority for many Europeans,” said Lozano-Aguilera.

The EEA has just released a report showing that greenhouse gas emissions from heavy goods vehicles increased by almost 30% between 1990 and 2019. They are responsible for a quarter of the world’s CO2 emissions from road transport. They have risen steadily since 2014, with the exception of a decline in 2020 due to the COVID-19 pandemic. This trend is contrary to the goal of the European Green Deal, which aims to reduce emissions by 90% by 2050 through a smarter and more accessible transport system.

While Google Maps can help Europeans find economical routes, the EEA has another idea to cut emissions: shifting freight traffic from road to rail and passenger traffic from cars to buses.

The second option would reduce the need for economical routes. But while trains are a great option for traveling around Europe, it will be difficult to convince Europeans to ditch cars in favor of buses. The EEA would also like to reduce travel.

Google notes that Maps users can always select the fastest route in Settings. 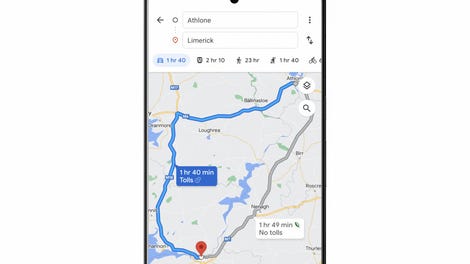