The war unleashed by the crypt – For more than 5 months, we have been witnessing with horror an armed conflict on the borders of Europe. This nameless war is polarizing the world, destroying past alliances and pitting once friendly countries against each other. And amid the roar of the bombs, cryptocurrencies are quietly making headlines. Indifferent to Manichaean considerations, it is used by the Ukrainians and Russians to fuel the war economy. Chainalysis has just published some data on the Russian camp, which we will compare with the data provided by Ukraine. Web 3 in a minefield. Explanations!

Information about the number of cryptocurrencies collected by Russia is taken from the report of the blockchain data specialist: Chainalysis. This document is online and sheds a special light on this new form of funding with cryptocurrencies.

Basically, we learn that 54 Russian “paramilitary” organizations collectively received nearly $2.2 million in cryptocurrencies. These more or less identified groups received mainly Bitcoin (BTC) and Ether (ETH), but there are also Litecoin, Tether and Dogecoin. So much currency was also used by the Ukrainian camp to raise their own donations.

In this war of solidarity, Zelensky’s country enjoys capital-sympathy, which is inevitably higher given the circumstances. Thus, the Aid to Ukraine website displays nearly $60 million in donations in multiple cryptocurrencies, or 30 times more.

But apart from the accounting aspect of the document, we will learn, first of all, about the use of these funds. And there we find purchases of military equipment such as drones, weapons, bulletproof vests or transmission media. And, of course, propaganda and militant communication have their place in this conflict 3.0. Images are shared on social media to encourage donations and motivate troops. 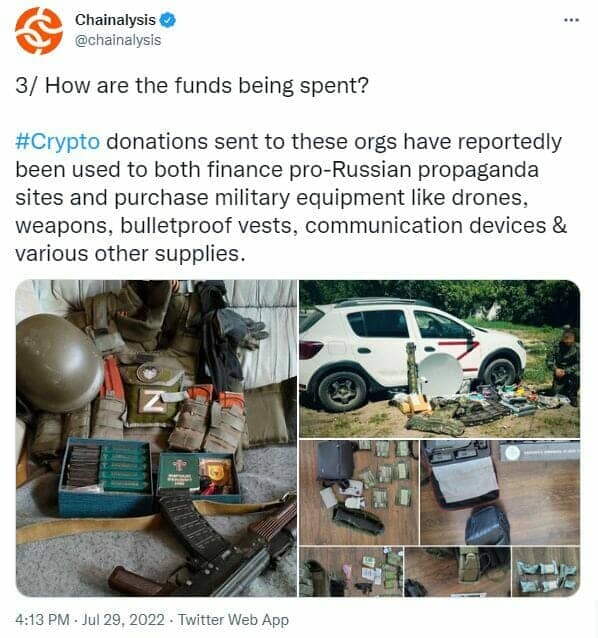 >> Cryptocurrency in Ukraine is changing the rules of the game. For purchase only one address, PrimeXBT (commercial link) <

The US Office of Foreign Assets Control (OFAC) provides interesting details about the main recipients of these funds. Thus, we learn about the existence of Alexander Zhuchkovsky, who stands up for the Russian imperial movement. This disturbing character raises funds for this organization, classified in the West as a terrorist organization, as well as for Terricon, which supports the militias in the Donbass. He would even try to sell NFT collectors to finance himself, but was unsuccessful.

OFAC also identifies other groups under economic sanctions that continue their illegal activities on the ground. The territories of Donetsk and Luhansk regions are particularly concerned about these militias who mix propaganda and fighting. These organizations will use the Russian crypto exchange Bitzlato to convert funds. The report says $1 billion since 2019. Finally, the report also cites the influential Wagner group as evidence that the Kremlin is pulling strings in the shadows.

The private American organization Chainalysis, which monitors the slightest movement of the Russian cryptocurrency, took up the case of Ukraine. In consultation with OFAC, it is about identifying the recipients of donations in order to better punish them. In their blog, Chainalysis explains that “they will also continue to pay close attention to other indicators of Russian sanctions evasion and money laundering using cryptocurrencies.” For those who still consider Bitcoin anonymous, this is a real slap in the face. Meanwhile, Moscow authorities continue to criticize cryptocurrencies.

As with geopolitics, the stakes for cryptocurrencies are sometimes high. For your safety, choose a reliable and reliable partner. Register now on the PrimeXBT platform (commercial link).