In October 1995, a team of astrophysicists from the Observatoire de Haute-Provence discovered the first exoplanet to orbit a star similar to the Sun: 51 Pegasi b. Since then, more than 4,500 exoplanets have been confirmed, in almost 3,400 different planetary systems; several thousand candidate planets are also awaiting confirmation. Among these other worlds, several are rocky, like Earth, and are located in the so-called habitable zone. Therefore, it is legitimate to wonder if there are other intelligent species in the Universe or if we are definitely alone.

While humanity has watched the stars for centuries, the question of whether we are alone in the vastness of the Universe remains. The idea has also greatly inspired (and continues to inspire) science fiction literature and film. Most people (even more than a third of Americans) believe in aliens, and an Ipsos poll found that 20% of the world’s population believe that “aliens” live among us on Earth, disguised as! humans!

The chances of finding a life elsewhere remain unknown to this day, but it can still be said that these “chances” are increasing. Since the discovery of the first exoplanets, scientists have continued to determine which worlds are most likely to host a life form. For example, life as we know it requires liquid water, so an exoplanet too close to or too far from its host star is less capable of harboring living organisms.

A probability based on the detection of biosignatures in exoplanet atmospheres.

Therefore, our best chances are on the side of planets located in the habitable zone. But to date, scientists have not detected any convincing evidence of possible advanced extraterrestrial technology, either with space telescopes or via ground-based observatories, although Avi Loeb has been convinced otherwise since the “Oumuama” object grazed Earth in 2017. Similarly, we have not detected the slightest trace of life, even a small bacterium (at the same time, we do not have a “universal” definition of life, which could therefore take an unimaginable form). What are our real chances of one day discovering an extraterrestrial intelligence (ETI)?

To answer this question, Frank Drake, American astronomer and founder of the SETI project, proposed in 1961 a formula to estimate the potential number of extraterrestrial civilizations in our galaxy with which we could come into contact. This number is equal to the product of seven parameters, among which: the number of stars that form each year in our galaxy, the proportion of stars surrounded by planets, the expectation of the number of planets potentially suitable for life per star, the length of time advanced extraterrestrial civilizations would emit radio signals into space, etc. Based on the data available at the time, Drake and his collaborators estimated that 10 civilizations were able to communicate in the Milky Way.

However, it is particularly difficult to estimate each of these parameters with certainty, and even today scientists cannot agree on which values ​​to use. In 2013, Sara Seager, an astronomer and planetologist at MIT, proposed a modified version of the Drake equation, reduced to six factors, focusing on the presence of some extraterrestrial life (and not on the ability of these life forms to communicate to via radio signals). ; this version includes in particular the fraction of so-called “silent” stars and the fraction of planets in which life produces detectable gas signatures.

The formula proposed by Sara Seager to estimate the possibilities of another intelligent extraterrestrial life in the Universe (here, with the most optimistic values). Unlike Frank Drake, it is based in part on the probability of detecting gas biological signatures. © The information is beautiful / Facebook

Focusing on M-type stars, such as red dwarfs, which are the most numerous stars in the Universe but are smaller and dimmer than the Sun, Seager estimated the values ​​for each term in his formula, the result of which eventually suggested that two planets “inhabited” by some form of life could reasonably be discovered in the next decade. But this estimate dates from 2013 and little by little we are approaching the end of the “decade” mentioned by the planetologist …

However, the James Webb Space Telescope, which will launch on December 22, could detect such biomarkers in the atmospheres of Earth-sized exoplanets. Astronomers have discovered that 6% of all red dwarf stars have an Earth-sized planet located in the habitable zone. Webb and other future telescopes could detect signs of an atmosphere like ours (made up of oxygen, carbon dioxide, methane), or detect signs of photosynthesis or even any other molecule that suggests the presence of animal life.

A technologically advanced and “intelligent” life could, for its part, generate atmospheric pollution -as on our planet- that could also be detected by future observation instruments. In short, a powerful enough instrument could allow us to determine whether we are facing an advanced life or a much simpler way of life.

Caltech scientists have also made a statistical estimate of the appearance of a TSI in our galaxy. His work was published earlier this year in Galaxies magazine. In particular, they determined where and when life in the Milky Way is most likely to occur and identified the most important factor affecting its prevalence: the tendency of intelligent creatures to self-destruct. In fact, previous studies show that technological advances in a civilization inevitably lead to complete destruction and biological degeneration.

They discovered that the probability of the appearance of life, based on known factors, peaked in an annular region some 13,000 light years from the galactic center and 8,000 million years after the formation of the galaxy; complex life diminished temporally and spatially from this peak; therefore, he would be too young to be observed. Earth, by comparison, is about 25,000 light-years from the galactic center, and human civilization appeared on the planet’s surface about 13.5 billion years after the formation of the Milky Way. “Our results may imply that intelligent life may be common in the galaxy, but that it is still young. […]. [Ils] They also suggest that our location on Earth is not in the region where most intelligent lives sit, and that SETI practices should be closer to the interior of the galaxy, preferably in the ring 13,000 light years away from the center. galactic, ”the researchers write. 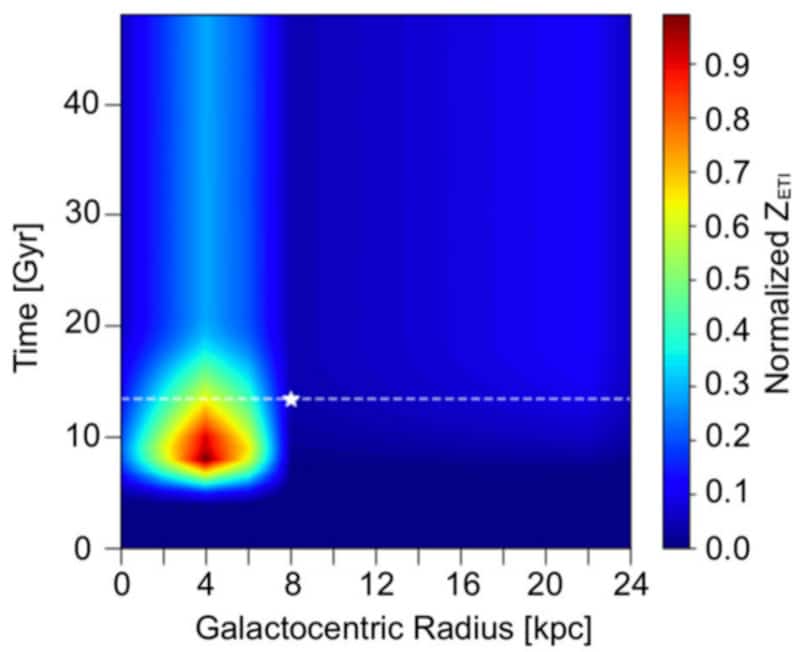 According to Caltech researchers, the peak of life’s appearance is located about 13,000 light years from the galactic center and 8,000 million years after the formation of our galaxy. © X. Cai et al.

Several experts agree that our chances of finding microbial extraterrestrial life forms are much greater than those of detecting an ILI. And if the research is focused on rocky worlds similar to Earth, researchers have recently identified a new class of extraterrestrial worlds, which are particularly conducive to the development of microbial life: planets called “hycean”, which are up to 2, 5 times bigger. Earth-size and covered with vast oceans of liquid water under a thick, hydrogen-rich atmosphere. These planets appear to be incredibly abundant throughout the galaxy and could host life similar to “Extremophilic” organisms that thrive in some of the harshest environments on Earth, the team members said.

A new framework for results reporting

However slim our chances of coming into contact with an extraterrestrial life form, intelligent or not, it is essential to anticipate how the public will be informed of this potential encounter. Among those who strongly believe in the existence of an ETI, many imagine that these beings evolve in utopian societies, free from war, disease and death (or any other problem our world faces) and would potentially be able to eradicate these problems in our planet. . These people run the risk of being really frustrated if one day they discover that the extraterrestrial life so fantasized is nothing more than some species of amoeba …

In a recent article published in Nature, a NASA team asked the scientific community to establish a new framework for the search for extraterrestrial life, saying that “our generation could realistically be the one to discover evidence of life in the world. the earth “. The authors, including Jim Green, the agency’s chief scientist, suggest creating a scale to contextualize the importance of the new findings from this research, a way to avoid making small steps taken appear like giant steps in public view. 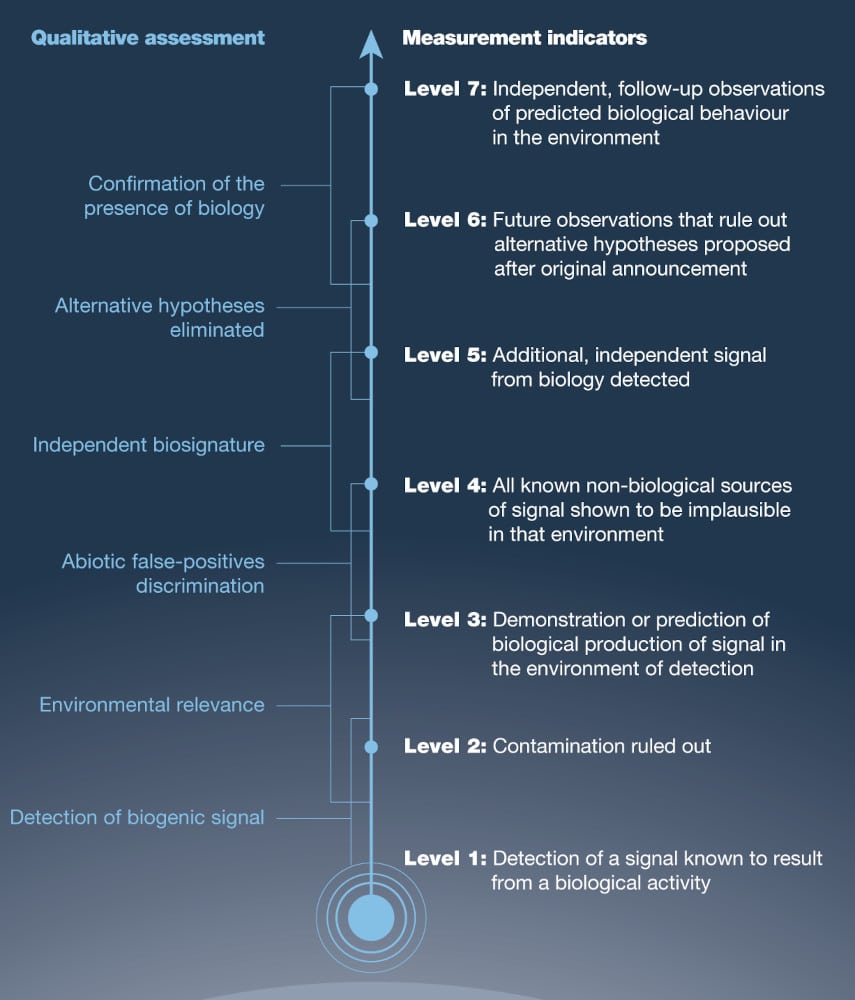 The “confidence scale” suggested by NASA scientists to account for discoveries made in the search for extraterrestrial life. © J. Green et al.

“We need a better way to share the excitement of our discoveries and demonstrate how each discovery builds on the next, so that we can take the public and other scientists on the journey,” says Mary Voytek, director of NASA’s astrobiology program and co-author of the study.

Each level of this scale would correspond to a confidence level, with level 7 being the maximum, which attests that scientists have surely detected life. Will we ever get to this level 7? For Dr. Ravi Kopparapu, who studies the habitability and potential of life on exoplanets at the Goddard Space Flight Center, it is obvious: “It is not a question of ‘if’, it is a question of ‘when’ do we find life on other planets. . I am sure that in my life, in our life, we will know if there is life in other worlds, “he said.