” He / she is [grand/petit](e) for his age ”is a phrase many parents have heard before. And for good reason, a healthy child usually grows at a great rate … until the end of puberty, after which it becomes rarer to gain extra inches. Height generally stabilizes around 18-19 years. But what exactly determines the size of an individual? Are our measurements defined from birth? On what biological factors is the growth mechanism based?

In humans (as in other vertebrates), growth hormone (or somatropin) secreted by somatotropic cells in the anterior part of the pituitary gland stimulates cell growth and reproduction. This hormone is essential: a dysfunction of the somatotropic cells can lead to various pathologies, such as dwarfism, or vice versa, gigantism or acromegaly, a disease characterized by an abnormal increase in the size of the feet and hands and a deformation of the face. .

If hormonal dysfunction is not diagnosed and in the absence of serious illness, any individual can expect to be of “normal” adult height. According to the League Against Obesity, in 2020, the “average Frenchman” measures about 1.77 meters, while the “average French” measures 1.64 meters. It appears that the French have gained more than 1 cm in average height in 8 years (1.2 cm for men and 1.3 cm for women) compared to data from a national survey conducted by ObEpi-Roche in 2012.

In the first year of a person’s life, growth is extremely rapid: a baby’s height usually increases by 50%. Then, between the ages of 2 and 5, children generally grow 6 to 9 centimeters per year. Around the age of 10, growth slows slightly: children still gain 6 centimeters each year on average. Eventually, growth continues through adolescence and then ceases completely around 18-20 years. The growth plates, located at the ends of each bone in the skeleton, simply stop producing bone material and are closed.

The medical history that became effective on April 1, 2018 contains new reference growth curves. They were established by Inserm and researchers from the Center for Research in Epidemiology and Statistics, based on more than 5 million measurements collected in children aged 0 to 18 years. The old curves date back to 1979 and were no longer representative of today’s young French population. And for good reason: it turns out that by the age of 10, the average height of girls has gone from 134.7 cm to 139.5 cm, or almost 5 cm of difference!

Average height of adult men born in 1996. A study by scientists at Imperial College London, based on a century of data (1896-1996) found that Dutch men and Latvian women are the tallest in the world: they measure 182, 5 cm and 169.8 cm respectively on average. © NCD Risk Factor Collaboration, eLife, (2016)

This edition of the medical record also includes a formula to calculate “the target height”, that is, the estimated adult height of the child. The formula is as follows:

Of course, the result is just an indication and lacks precision; It is also mentioned that the margin of error is ± 6 cm. This method, also used by the French Association of Ambulatory Pediatrics, essentially serves as a benchmark for detecting any underlying health problems as early as possible.

If this formula is based on the respective size of the parents, it is not in vain: the size of an individual is essentially determined by their genetic inheritance. Various biological substances come into play: growth is a complex phenomenon, which is affected not only by growth hormone, but also by thyroid hormone, androgens, glucocorticoids (cortisone and cortisol), and insulin. But there are many external factors that can also influence height during development, especially nutrition.

Experts in auxology, the science that studies the growth of living things, estimate that DNA is responsible for about 80% of a person’s height. Therefore, it is common for tall people to also have quite large children and vice versa. According to a study published in Nature, more than 700 genetic variants (alleles) are related to size. Some of these genes affect growth plates, others affect the production of growth hormones. Certain genetic diseases, such as Down syndrome and Marfan syndrome, can also affect a person’s adult height. 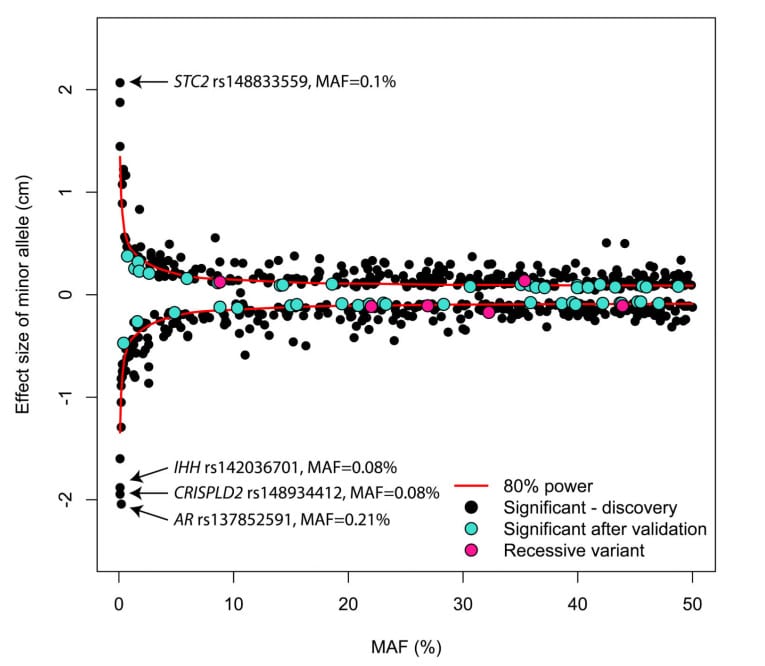 More than 700 genes are related to the height of an individual. The alleles with the greatest impact on height (up to ± 2 cm) are the rarest. © E. Marouli and others, Nature (2017)

As explained in a 2016 study published in Nutrition Reviews, two growth periods are important in determining adult height: growth that occurs from conception to age 2, and then growth that occurs during adolescence through adolescence, onset of puberty. Adult height is established mainly during the first period, in childhood, when nutritional requirements are greater than at any later time.

The second growth period can be seen as an opportunity to “catch up with growth”, although it is usually not enough to completely fill the gaps in the first period. During this time, hormones from the gonads (testosterones and estrogen) and adrenal glands combine with growth hormone (or GH for growth hormone) to produce the famous adolescent “growth spurt.” Sex hormones trigger the spike and increase the rate of maturation of the growth plates, followed by their ossification. That is why, in the case of precocious puberty, premature cartilage welding carries the risk of a small permanent size.

Therefore, the size of an individual is also determined by sex. In adolescent girls, the peak of growth occurs at the beginning of puberty, around 10-11 years, and lasts until the beginning of the first period; after which, growth slows down and then ceases (usually around 14-16 years). In adolescents, the peak is later, around 2 years after their female counterparts, but they can continue to grow more than girls (up to around 16-17 years). However, some men with more “fragmented” puberty can grow into their 20s.

Thyroid hormones also play an important role in growth: their absence leads (among other serious consequences) to severe growth retardation. For this reason, in France, systematic neonatal screening for congenital hypothyroidism has been practiced for more than 40 years, in order to treat the disease as soon as possible.

Finally, a hypersecretion of cortisol by the adrenal glands (which characterizes in particular Cushing’s syndrome) causes a slowdown in cartilage growth and bone formation. One study points out that, although this relationship is complex, “too much cortisol inhibits growth and skeleton, normal cortisol levels are part of the mix that ensures both normal secretion of growth hormone and bone formation during growth. “. Other hormones, such as insulin, are involved in the growth process, but their role is not yet fully understood.

Sleep well and eat well, the key to optimal growth

Sleep is also essential for the proper development of the body, since it is during sleep when the body releases a maximum of GH. According to a study published in the journal Therapeutic Endocrinology and Reproduction Medicine, this hormone is secreted in the form of secretory spikes throughout the 24 hours. A major spike occurs shortly after the onset of sleep, around the time of REM sleep.

But it seems that this peak is attenuated when sleep is affected; In addition, the pharmacological stimulation that allows to enrich REM sleep allows to obtain an increase in GH secretion. However, the study cites an experiment that showed that in the event of lack of sleep, GH secretion increases during the day, which would compensate for the decrease in the main peak of secretion related to sleep. As good sleep is essential for many other facets of a child’s development, it is better to take advantage of the night peak …

Not surprisingly, nutrition is the single most important external factor affecting growth; Growth retardation is often a response to limited nutritional intake at the cellular level, which implies that resources are mobilized to maintain basic metabolic functions (and no longer for growth). The different nutritional components received during the intrauterine and postnatal periods are related to adult height. Protein is the most essential nutrient, followed by minerals (especially calcium) and vitamins A and D.

If the intake of nutrients is not enough, the body struggles to defend itself against infection. However, the disease in turn can affect growth by preventing food intake, absorption and transport of nutrients to the tissues, causing a direct loss of nutrients that affects growth and bone density. Several chronic diseases (asthma, cystic fibrosis, Crohn’s disease, etc.) declared since childhood have thus been associated with reduction in height. Nutrition and disease are the factors that partly explain the size disparities observed between countries; the population of high-income countries is generally larger than that of poor countries.