What happens in Forex with the GBP/USD pair?

If the price of the GBP/USD pair can fall in forex due to the fact that the Fed is more aggressive than the Bank of England, is the reverse also true?

Just two months ago, the GBP/USD pair traded at its lowest level in forex history, bottoming around 1.03565. Today the GBP/USD pair is trading around 1.1950! A lot has happened in the last 2 months that brought the pair from the brink of collapse to today’s levels. Many attributed the sale to Liz Truss, or at least her “mini budget”, which supposedly left a gaping hole in the budget deficit. While this may have been the straw that broke the camel’s back, the GBP/USD price declined for several months before selling off at the end of September. The GBP/USD hit a year-to-date low on February 22 at 1.4250! The pair fell as it became clear that the US Federal Reserve needed to start raising rates quickly. In the end, the board of directors decided that the increase in inflation was not transient. On April 22, the pair fell to 1.3000, and by mid-June the pair was trading at 1.2000. Once at 1.2000, the price of GBP/USD continued to decline in the normal channel until Wednesday, September 21st. The pair closed at 1.1235, below the channel’s lower trend line. Why did the price of GBP/USD fall from 1.4200?

GBPUSD daily chart (before the sell-off)

As inflation soared in the United States, the Fed accelerated the pace of rate hikes to 50 basis points in April. By mid-June, the Fed was up 75 basis points in an instant. Meanwhile, the Bank of England raised rates by only 25 basis points at a time, as it was particularly concerned about the UK economy falling into recession. It wasn’t until the last rate hike on November 3 that the Bank of England finally raised the rate by 75 basis points to bring the cost of borrowing down to 3%. The GBP/USD pair fell on Forex due to the difference in interest rates. When the “mini-budget” proposal was presented, the liquidity of the bonds dried up, which led to the collapse of the GBP/USD pair. However, despite the fact that the Bank of England had not previously raised rates aggressively enough, the Bank of England rescued the UK bond market, which contributed to the pound’s rally. Today, with inflation at 11.1% year-on-year in the UK and “only” 7.7% year-on-year in the US, the UK is expected to have to raise rates longer than the United States. However, there is also Prime Minister Sunak’s autumn budget that markets have yet to face: higher taxes and lower spending. This may help with the Bank of England’s forecast of an impending recession. 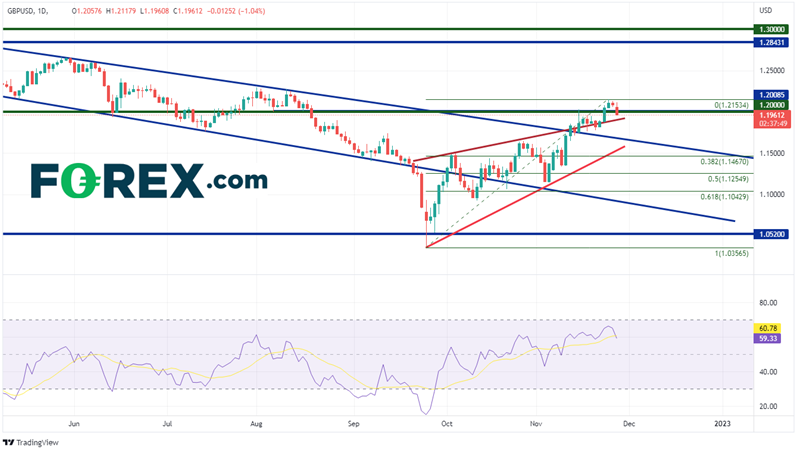 On the daily chart, the GBP/USD was looking to hit 1.2000. The price rose in the form of a rising wedge and broke through the top of the pattern. The price is expected to break down from the rising wedge. Will the price continue to fall from here? Pullbacks are normal for an uptrend, and a pullback to the 38.2% Fibonacci retracement level (1.1467) from the Sept. 26 lows to the Nov. 24 highs is not out of the question. However, before this level, the pair must go through support. The first level of support lies at the upper trendline of the wedge around 1.1900. If price breaks lower, next support is up, down trendline from long-term channel around 1.1650, then lower trendline from wedge around 1.1550. However, if the price continues to rise, resistances (previous highs) to 1.3000 will be at 1.2293, 1.2660 and 1.2843.

So, if the GBP/USD pair could go down in forex due to the fact that the Fed is more aggressive than the Bank of England, is the reverse also true? Or is the GBP/USD just bouncing in a bear market? Keep an eye on key support levels to see if the price holds. If so, then GBP/USD could move towards 1.3000!