What will the world look like with bitcoin as the sole currency? Here’s some food for thought, starting with a simple question: Will fiat currency self-destruct?

Is it possible to use a single currency, available in absolutely limited quantities. Desired? Will this paradigm shift have major implications for society?

Before delving into these issues, it must already be said that such a scenario assumes the disappearance of fiat currencies. Is it possible ? Yes. To verify this, you have to look at two things:

Let’s start by defining what a “fiat” currency is. Here are three quotes to give you an idea:

“The only currency is gold, everything else is debt”

“If there were no debt in the system, there would be no money. »

“Every time a bank gives out a loan, it’s brand new money. »

Graham Towers, director of the Bank of Canada

Fiat money is “debt money”. Every euro, every dollar, every yen in circulation initially comes from debt. About 60% of the money in circulation comes from mortgage loans. The rest is the responsibility of states and companies.

Banknotes and coins are not actually created from debt, but represent only a very small part of the money in circulation. Only 1600 billion euros. For comparison with the total debt of the eurozone (states, households, companies), which reached 32,300 billion euros. Or less than 5% of the total money supply.

Thus, in other words, if we magically paid off all our debts, there would hardly be a penny left in circulation.

Which brings us to the word ponzi. Fiat currency is a ponzi. The reason is that debt must always increase in order for the system to work. This is mathematics. It is enough to decomplex things to understand this.

Imagine an economy starting from scratch with one banker and two borrowers. The banker creates ex nihilo 100,000 euros twice and lends them. Under 4% per annum.

Will both borrowers be able to pay this interest? No, for the good and simple reason that money corresponding to interests does not originally exist in the economy.

To make interest payments possible, a third party would have to move in and in turn borrow the money. In this case, it is technically possible that our first two borrowers will be able to find enough money to pay the interest.

This simple demonstration is true for an economy of 2 people, 10 people, 100 people, or a billion people.

In general, since interest-bearing money is never originally circulating in the economy, if some manage to repay their debt AND the interest, mathematically, others won’t even be able to repay the principal. Unless the total debt (the amount of money in circulation) grows continuously.

Understand that these interests are not nothing. Loaning €100,000 at 4% for 30 years means you end up paying €71,800 in interest! Therefore, bankers are forced to increase the terms of loans. The goal is to ensure that there is always enough money in the magma of the economy to ensure that interest is paid. Hence the inflation in the real estate market.

Except the trees don’t go up into the sky… One day a new generation will refuse to go into debt for 40 or 50 years. Then there will not be enough money in the economy to pay off debts without a hitch. Then comes the time of bankruptcies, unemployment and bursting of the real estate bubble. If we do not establish a universal income…

Public debt is also a ponzi. Moreover, unlike households, states never repay their debts. They are simply “rolled”. That is, they borrow money to pay off old debts.

This is terrible, because it means that governments are accumulating interest on interest. And this is an exponential mathematical process that can end badly. Hence the zero rates.

So to say, the fiat system carries the seeds of its self-destruction. Interest is a tricky one. No wonder they have long been banned by the Church…

Here is what John Maynard Keynes said about interest (usury):

“Therefore, I see nothing to prevent us from ever returning to some of the truest and least questionable tenets of traditional religion and virtue, namely, that miserliness is a vice, usury a crime, and the love of money abominable. — John Maynard Keynes

That being said, it is clear that a fiat currency system works relatively well if the economy can grow without restraint. An abundance of energy and material resources may even lead to wages rising faster than inflation, as well as moderate and stable public debt relative to GDP.

(This is the case of Russia, for example, with a debt that has fluctuated between 20% and 12% of GDP since 2004. Its vast energy resources allow for this.)

But the point is that physical constraints eventually stop economic production. Our planet is not expandable and 84% of the energy we use still comes from oil, coal and gas. This energy is the economy. Without it, nothing moves, nothing changes. People have become pilots of machines that work with … energy.

The peak of fossil fuel production will inevitably lead to a drop in the production and sale of almost everything. Real GDP will fall. Unemployment will rise. Tax revenues will dwindle, forcing states to take on even more debt in a frenetic hyperinflationary rush. Before regulation.

Feeling deja vu? We are here. The growth rate of energy production has been steadily declining since the 1970s, the decline becomes even more evident when we talk about energy per capita. 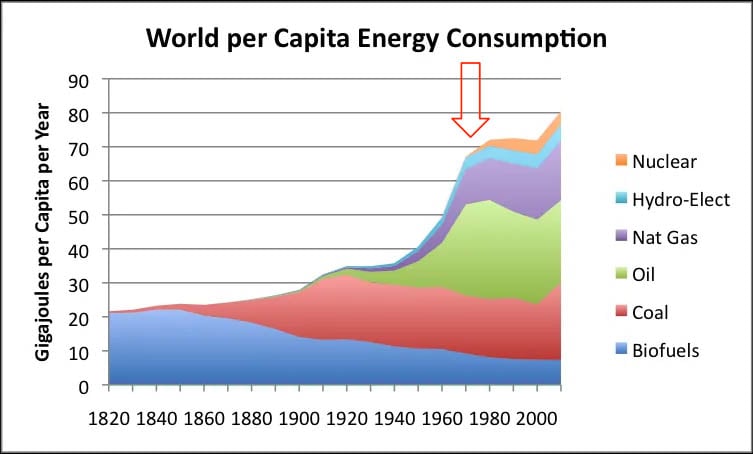 Energy consumption divided by the number of people

As Voltaire said, “paper money always returns to its intrinsic value, that is, to zero.” Another anniversary is approaching, and a different kind of currency is already waiting in the wings. We hear his heart beating every 10 minutes, block by block, ready to take over.

Yes, “hyperbitcoinization” is not pure fantasy. We will talk about this in the next article, which will be published tomorrow.

Journalist reporting on the bitcoin revolution. In my work, bitcoin is viewed through a geopolitical, economic, and libertarian lens.