SpaceX’s Starlink Satellite Broadband Division now has a Starlink residential module. But it won’t work on the go, and other Starlink users may take precedence over your connection, the company warns.

Starlink for motorhomes is available for those who want to use Starlink while traveling in white areas from telcos. The hardware costs 634 euros and the monthly maintenance costs 124 euros per month. Shipping cost to France is 71€. 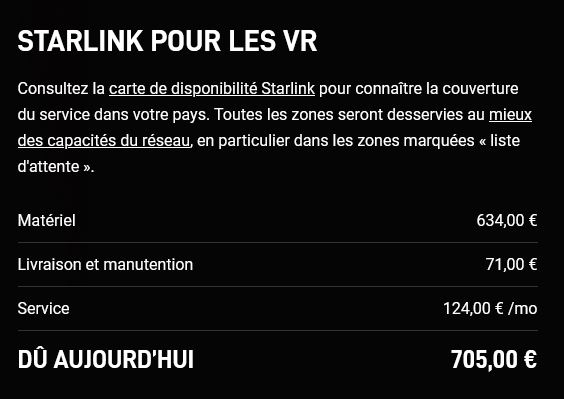 SpaceX and Tesla CEO Elon Musk today announced on Twitter the availability of Starlink for RVs. He explained that the antenna was “too big for cars”. It also won’t work when you’re on the go, the company notes: “We don’t currently support Starlink on the go. Using the Starlink kit while in transit will void the warranty on your kit. To enable the use of Starlink on moving vehicles (e.g. cars, boats), Starlink has not yet been configured to be used safely in this way.”

Starlink RV customers can expect high-speed, low-latency internet in areas marked “available” on Starlink maps. These areas now include most of North America, Europe, as well as the southern half of Australia and New Zealand.

However, users will experience “significantly slower speeds during peak hours in areas marked as ‘waiting list’ or during events with a large number of users nearby.”

Starlink for RV should offer download speeds from 50Mbps to 250Mbps and from 5Mbps to 100Mbps in congested areas.

Starlink RV network resources are “always deprived of priority” over other Starlink services, “resulting in poor quality of service and slower speeds in congested areas and during peak times,” Starlink said in a statement on its support page. “The listed speeds and uninterrupted use of the service are not guaranteed. The degradation in quality of service will be most significant in the “waiting list” areas of the Starlink Availability Map during peak hours. For expected performance, see the Starlink specifications here.”