APIs are very present in business transformation programs, in particular to decompartmentalize the information system and open it up to the ecosystem of the company’s partners and customers, who will come and seek services and data. For companies that produce machines (industrial, agricultural, etc.), it is also the possibility of connecting this equipment to the digital transformation of their customers, where they become formidable sources of data for their operations.

But do they have the possibility of completely transforming an industry?

This is what this post will seek to illustrate with the banking sector, which paradoxically rather has the image of being very closed, and which by construction will seek to secure, rather than open to all winds. However, the evolution of this sector in recent years has shown the opposite and the regulator is pushing so that the value of services of all actors is greater than the sum of the values ​​of services of each actor. 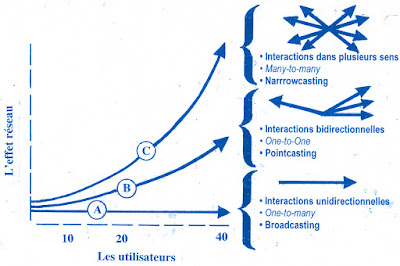 Indeed, APIs allow connectivity between actors. We are therefore mainly in B2B – Business to Business – when we talk about APIs.

A first comparison that can be made is therefore that of Metcalfe’s empirical law, which says that the value of a network increases with the square of the number of participants. If APIs make it possible to increase the size of an ecosystem, the value of this ecosystem increases for everyone and creates value.

These APIs are mainly used to exchange data and deliver services.

A second strong idea is therefore that the circulation of data between two players will make it possible to develop new services which could not be developed by a single bank. For example, you must have noticed that your bank recently offered to display the balances of accounts that you have in other competing banks. The benefit for you is to simplify your account management and from the online interface of the bank where your salary is domiciled, being able to easily see how much to transfer to others to fund them.

This centralized account management service has also emerged outside of traditional banks with FinTechs, such as Bankin or Linxo, which initially positioned themselves on multi-account and multi-bank management. We will see that deregulation then reinforced these models. Since then, their ability to analyze data using in-house algorithms has enabled them to move towards banking coaching. They have thus been enshrined in the status of aggregator of services, built on their platforms and APIs.

The flow of data delivers additional value to that of traditional banks and the algorithm, not the data, is the source of competitive advantage. 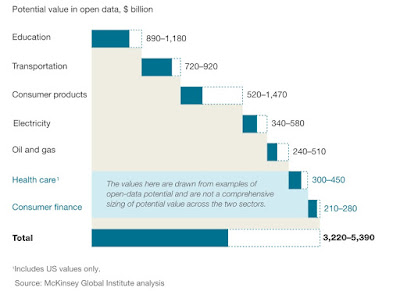 A study of McKinsey had marked the spirits eight years ago by posing the potential of the opening of data (not that the opendata of the public sector) and estimated it between 3 and 5 billion billion, at the scale of the economy global.

In this study the field of finance was not the one that had the most potential, but it was clearly identified and since then has allowed many FinTech to find their place. The field of transport has also since shown its potential and even developed exchange standards.

We can also see that the openness of data in the field of health brings value. This has been demonstrated in the Covid health crisis driven by data shared throughout the chain, and on all channels, on a daily basis.

The production of vaccines in one year, which had never been done, is also a textbook case of data exchange at the level of an industry. Weekly data exchanges during all phases of clinical trials, between the agencies in charge of authorizing vaccines and the manufacturers who test them, made it possible to involve these agencies very early on and to speed up the process of several years. They were also able to reduce the risk with their regular returns and encourage manufacturers to start production before validation, or to abandon quickly like the unfortunate vaccine from Sanofi / Pasteur.

These two data releases will definitely mark the healthcare industry in the future, and agility is clearly a method break – perhaps not publicized enough – in a process that was full of tunnels, belts and suspenders effects. On the other hand, apart from making appointments with online platforms like Doctolib, there are very few APIs currently, but a lot of csv exchanges.

But back to the banking area. In addition to the FinTech which is clearly an engine of transformation of the industry which draws on the opening of data, regulation is another important factor of transformation and more particularly “open banking” which obliges Banks to give access to their data.

The directive DSP2 introduced (in 2018) a statute allowing non-bank third parties to issue means of payment (typically cards) and make payments on condition that the accounts do not go overdrawn (while waiting for these new operators to be authorized to make credit). Actors like Treezor took the opportunity to ensure that account keeping and bank card management can be managed in a white label and sold to neo-banks focusing on sales, customer relations and integrating these features on their platforms via APIs . This is not unlike in telecoms the model of MVNOs “virtual mobile telecom operators”, which sell mobile services without having a physical infrastructure.

This directive thus allowed the multiplication of new players and the enhancement of banking data, and according to Metcalfe’s law to the increase in the overall value of the industry. Those who benefit the most are those who collaborate the most and the fastest, by increasing the integration of their services and the size of their ecosystem. A counter-intuitive reflection ten years ago in the Bank.

APIs have therefore become the main elements of an ecosystem, business models, without which they cannot function. They have become strategic and the banking offer integrates the API offer, whether to create new services (such as the Telecoms OTT) or to generate additional income. APIs also make it possible to benefit from the advantages of this technology to secure access.

Their impact on the industry is the emergence of new models that require players to reposition themselves in relation to the production of services and customer relations. Here we find the evolution of the SCM-CRM relationship highlighted in other posts. Traditional B2C banks with strong brands will try to be full suppliers (“Full service provider“) even if it means integrating or buying FinTechs, while others will concentrate on the production of banking services (“Bank as a Service“). Investment banks deeply rooted in B2B will have to integrate this approach and develop their ecosystem.

Another issue is technological, like Amazon, which on the one hand sells directly, but also integrates third-party stores and provides its technical platform with AWS. Some players will become essential technical platforms (“Bank as a Platform“), which is ultimately nothing new in the means of payment and interbank services, and which made the fortune ofATOS Wordline around the network of Automatic Ticket Distributors (DAB / GAB).

Finally others will be tempted by the more visible model of “Marketplace“even if it means integrating services that have no direct link with the banking sector.

The strategy of Wechat Pay (Tencent – “the Chinese Facebook also mobile operator”) and Alipay (Ali Baba – “the Chinese Amazon”) are today the most disruptive on a large scale. The characteristics of the Chinese market, its size, and in particular the payment revolution in retail sales, are of course not unrelated to this success, and it is not obvious that it can be transposed. APIs are used on their platforms to take advantage of all the other functions (social network, shopping, etc.) and not externally with the banking world.

In less than 10 years, these players have succeeded in disintermediating banks from payment transactions, with more than a billion users on each platform, bank cards and cash replaced by QR codes and digital transactions on these platforms. Last year the IPO of Ant, Alibaba’s online bank valued at 30 billion, has been suspended by Chinese authorities. A disruption that was perhaps even becoming uncontrollable by the authorities themselves …

The transformative power of APIs and platforms at the industry level is therefore very important. The four operator models in this new paradigm are generic enough to be transposed to other industries, after being inspired by telecoms. The speed of transformation in each industry will depend on regulation, of course, but also on the current degree of closure.

The more it is closed today, the more opportunities and value there will be to open tomorrow, thus attracting investments as a priority. Finally, the banking sector is a textbook case of the transformation of an industry by APIs.