The shells of gastropods, also called gastropods, are very often in the form called “helicospiral”, they are of great beauty and particularly recognizable. But the typical shape of this class of mollusks is no exception in nature, as Régis Chirat explains to Sciences et Avenir, first author of a study published on November 30, 2021 in the journal PNAS and a professor at the University of Lyon 1 “This mechanism that forms coils is found in other elements of living beings, such as the umbilical cord, or the helical form of DNA.”

The mathematical explanation had been given. Not the biology

But if the various shapes of these shells had already been described in the form of mathematical equations, the biological explanation was yet to be discovered. “The first mathematical descriptions were proposed at the beginning of the 19th century, and since the different forms could be simulated on a computer, until now we did not know the biological engine to form them”, details Mr. Chirat.

Known since the Cambrian explosion 540 million years ago, all gastropods secrete their shells upon opening. Mathematically, this layer can be described as a “helix drawn on a cone, whose two-dimensional projection at the base of the cone is a logarithmic spiral”, explains Régis Chirat. But for the first time, the researchers propose in addition to this description “the biological mechanism that is at the origin”, detailed by the study in its entirety.

From ammonite to snails, a common mechanism

Relying first on the study of ammonites, these now-defunct cephalopods, the authors began their research. In fact, these had, for the most part, the so-called “planispiralées” shells, that is, forming a spiral wound in a plane. But in some rare cases, only 1% of ammonites according to the study, the shell took a shape similar to that of gastropods, a helicospiral shape. Finally, in even rarer cases, it took on a much more devious form. “We were first interested in ammonites, in particular the ammonite Nipponites mirabilis, a species whose shape is very strange and which is practically only found in Japan,” explains R. Chirat.Rare heteromorphic ammonites have secreted asymmetric shells sometimes similar to those of gastropods. A. Helical shell, Turrilites costatus, France. B. Helicospiralized shell in internal towers then planispired, Colchidites breistrofferi, Colombia. C. Helicospiral and later planaspirated shell, Didymoceras stevensoni, USA D. Serpentine shell of Nipponites mirabilis, Japan (scale bar: 10 mm). Credits: Chirat R., Goriely A. and Moulton DE

The researchers then tried to understand how such a shape could develop. “The question was how an ammonite can secrete such a complex shell, totally abnormal in appearance but in fact following very precise mathematical rules. Several clues have shown that it was the body that governed the path followed by the opening, then step by step I understand that this rule applies to both ammonites and gastropods ”, explains R. Chirat.

Scientists have thus discovered that everything develops during the growth of mollusks: the shell is secreted at its opening and gradually rolls up as it grows. But the way it is positioned, which will then give it its final shape, depends on the orientation and deformation of the body of the mollusk inside the shell.

To simulate these different possible growth rules, the researchers modeled the body of the mollusk using two elastic rods, one for the ventral side and one for the dorsal side, while the shell, shown in green, surrounds the two stems. 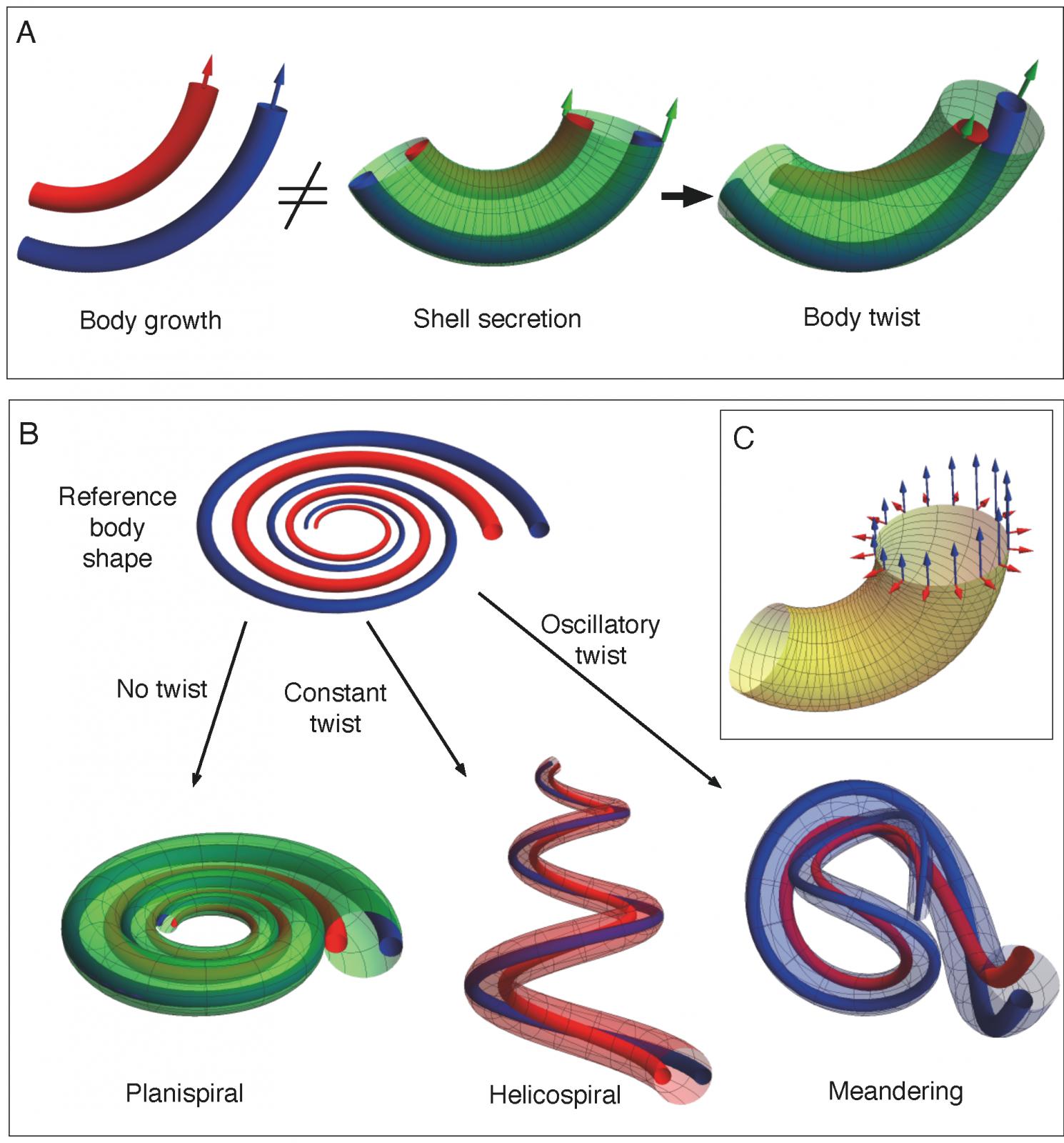 Depending on the twist that the stems will undergo as they grow, the shell will take different shapes, explaining the three possible types of shells: planispiral (like most ammonites), helicospiral and meanriform. Credits: PNAS / Chirat R, Goriely A & Moulton D. E

It is then the stresses to which these rods are subjected that define the orientation of the edge of the growing shell. “Everything is a matter of minimizing the elastic energy: we model the body of the mollusk with two rods, one for the ventral part and the other for the dorsal part, then the shell that surrounds the two rods. Then we calculate the stresses. Mechanics that are applied to each region and then the configuration that determines the minimum elastic energy of the system is determined ”, explains Régis Chirat.

But why these turns of the mollusk body?

Therefore, different shapes are possible, which ultimately depend on few parameters. “In gastropods, the body is asymmetric, hence the helicospiral layer. While for ammonites, the mechanism is different because their body has bilateral symmetry. The answer was found through growth decoupling”, details Régis Chirat.

Therefore, it is a different growth rate between the body of the mollusk and the shell that induces an axial torsion of the body of the mollusk, which in turn causes a rotation of the growth edge, generating a helical, even serpentine shell. “It is a permanent feedback: the body governs the course followed by the opening, but in return the already secreted shell impacts the mechanics of the body included in its interior”, concludes R. Chirat.