Over the years, I’ve had the privilege of testing hundreds of smartphones made by countless companies, and I can’t recall a time when I felt as apathetic to smartphones as I do today. More precisely, towards the design of modern smartphones.

It doesn’t matter if it’s a phone made by Google, Apple, Samsung, Motorola, or OnePlus. They all look alike. They are rectangular glass slabs with chamber dents on the back.

In fact, I can’t say I’m totally disinterested in modern smartphones. There’s a lot of fancy tech in devices like the iPhone 13 Pro and Pixel 6 Pro, which are two of my favorite phones released in 2021.

But there is one area that still draws my attention to design. I mean phones with a folding screen, or at least a folding design. I had the pleasure of using it during the last months of 2021, and it is now clear to me that folding phones will play an important role.

Aside from some rumors, there is no indication that Apple intends to launch its own foldable phone in the near future. And that’s a shame, because foldable phones are something Apple should definitely be working on. This is why.

The obvious: a bigger screen is much better 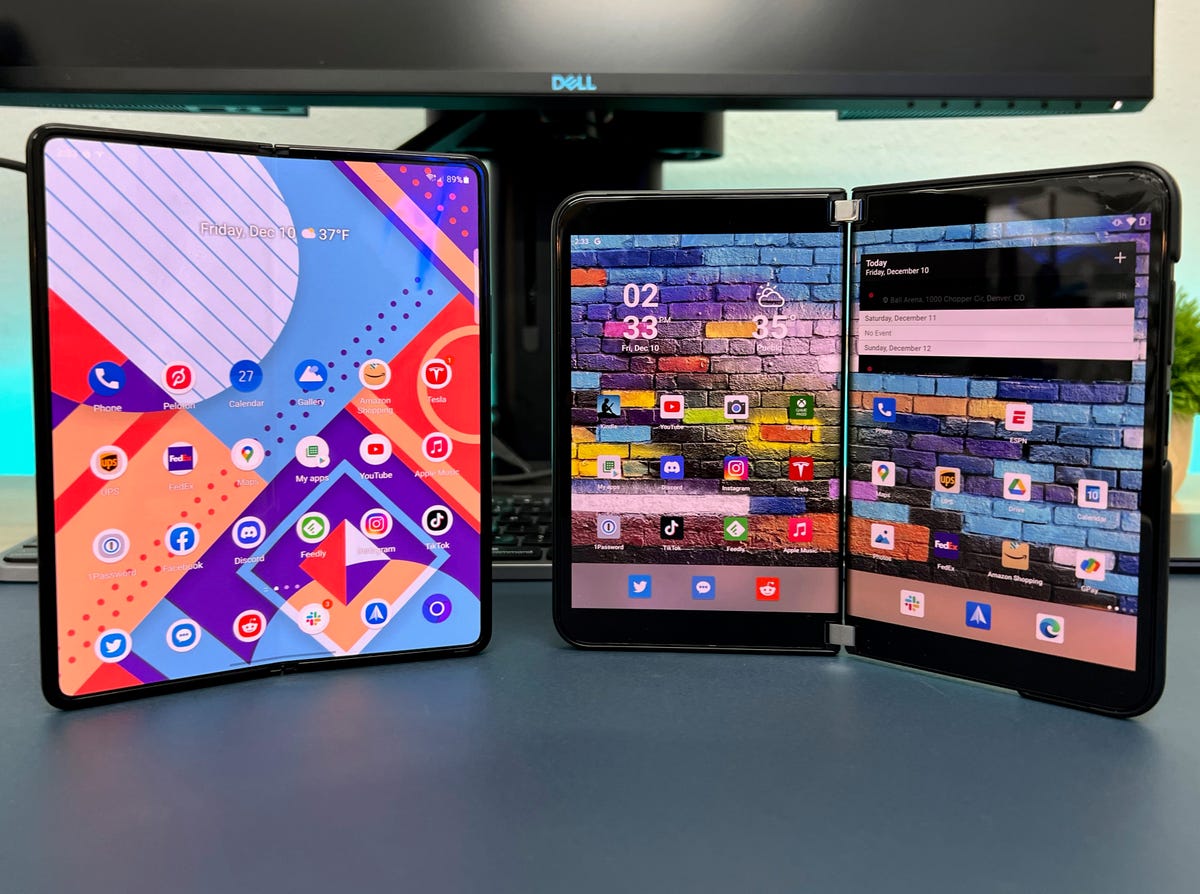 The popularity of phablets has made it clear that phone owners like to use devices with larger screens. Even though smartphones continue to grow in size, I think we are starting to reach the limit of what people are willing to carry.

It’s anecdotal, but personally I don’t see myself carrying a phone bigger than the Pixel 6 Pro or the iPhone 13 Pro Max.

So what do you do when customers have shown great interest in devices with larger screens? Fold the screen in half, of course. It’s crazy that I can even write this sentence and take it seriously, but thanks to Samsung’s drive to develop and manufacture foldable phones and customers willing to be beta testers for such technology, the technology has come of age.

A foldable phone is effectively two devices in one, which lends itself to being used as a full-size family device or as a device similar to a larger tablet.

Multitask. With a larger screen, it is easier to multitask.

A larger screen provides a more immersive experience when scrolling through your TikTok or Twitter feed, but it also allows for much faster and more intuitive multitasking than a standard phone. In this way, it is possible to have two applications open, one on each screen, and to switch from one to the other without hesitation or additional work.

I have an example with the inner screen of the Z Fold 3. Samsung allows you to open more than two applications at the same time, but I mainly used two applications next to each other. For example, I often have Twitter open on the left side of the screen and email from Spark on the right side. I can browse and order my inbox while keeping up to date with the latest news on my timeline.

Putting multitasking aside for a minute, having a bigger screen to do everyday tasks like surfing the web, reading articles, or reviewing a document just works better on a bigger screen. 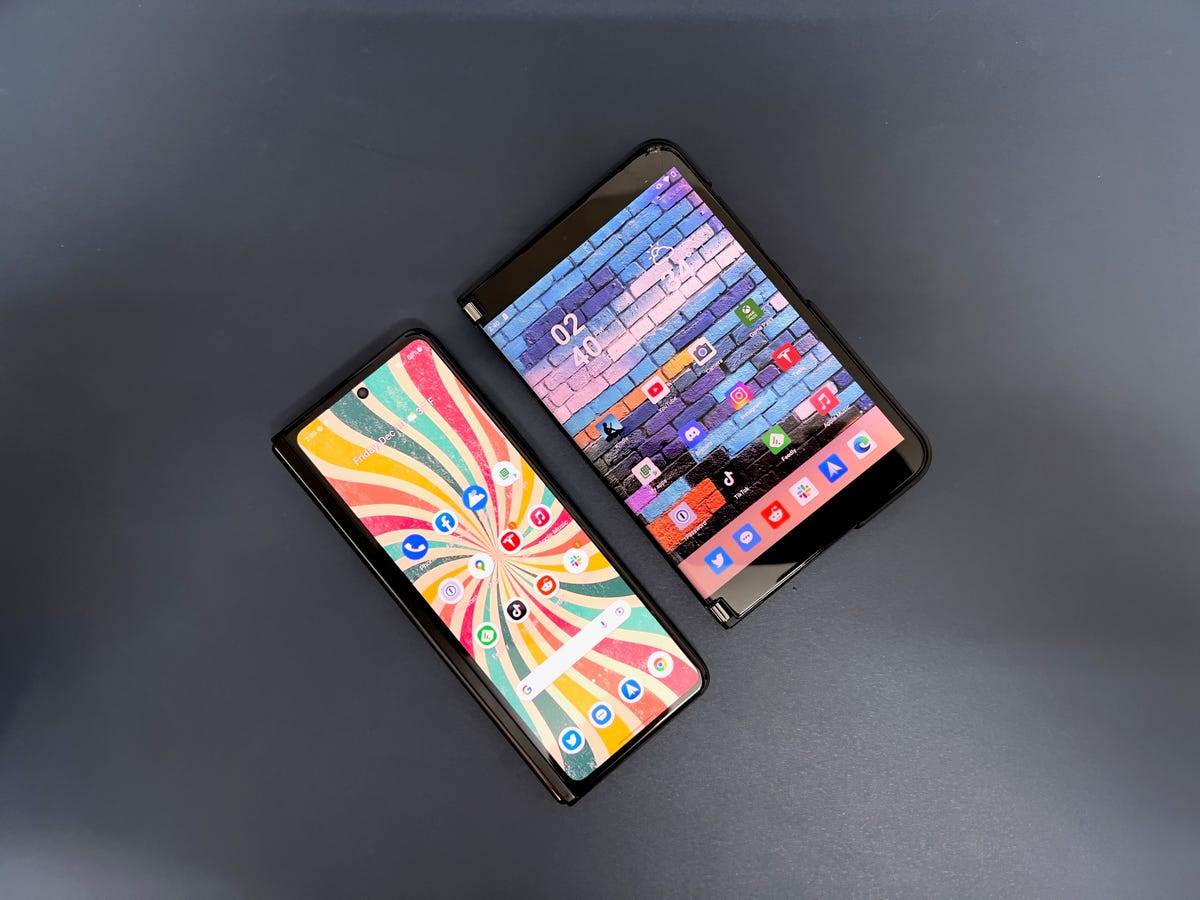 I used to view the design of the Z Fold as confusing for the user because it forced owners to decide which display to use and when. I was wrong.

Being able to choose which screen to use when you want to use it is a huge selling point that I didn’t understand until I spent a good amount of time using the Z Fold 3 myself. And by use, I mean more than just browsing a few apps and viewing apps in split screen mode. I mean setting it as my main phone instead of taking it with you instead of my iPhone.

Over time, I have found that the way I use the Z Fold 3 is constantly changing. For example, I started by using the front screen of the phone for most tasks, and only switched to the larger screen for specific tasks like reading a lengthy email.

A month later, I now spend most of my time using the inner screen, relegating the front screen to quickly reading a text message or scrolling through my Feedly account.

Giving users options can be a bad thing if they are not well thought out and implemented, but even the Duo 2 and all its gestures and multitasking quirks provide options to its users, improving the overall user experience to what current phone owners smart are used to it. . 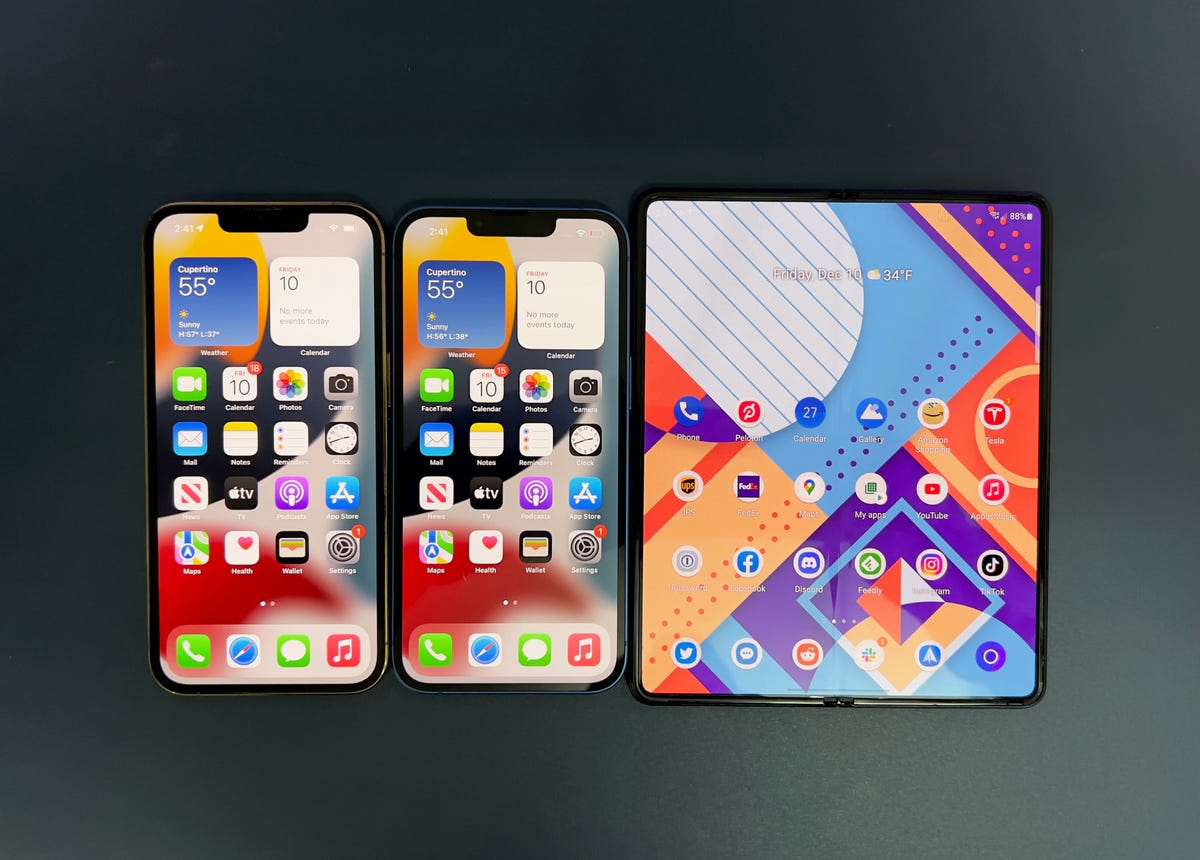 Two iPhone 13 Pros are roughly the same size as the interior screen of the Z Fold 3. Jason Cipriani /

I have no doubt that a team within Apple is already testing the technology the company would need to make an iPhone with a folding screen. No one knows if this device will ever hit the market, but for the competition’s sake, I at least hope it does. And the sooner the better.

Let me put on my Apple engineer hat and give you what a foldable iPhone would look like.

The front screen, and therefore the size of the phone when closed, would be roughly the same size as the iPhone 13 Pro. Unlike the Z Fold 3, which has too narrow a front screen, I would like the front screen The iPhone’s foldable had minimal bezels. The downside to the Z Fold 3’s narrow screen is that some apps don’t display properly, with text cut off on the right side of the screen. Also, the keyboard is too narrow to comfortably type long messages.

When I place an iPhone 13 and an iPhone 13 Pro (they have the same dimensions and screen size) side by side, the overall size is slightly larger than the Z Fold 3 when open.

I think if Apple were to use the iPhone 13 Pro Max as a basis for dimensions, the size would be too large for most people to comfortably type and navigate in the interface.

Apple could use Face ID on the front screen to secure the iPhone and enable Apple Pay payments, while also including a Touch ID fingerprint reader on the side button, as the iPad Air and iPad Mini currently do. The side button could be used to unlock the device when open, eliminating the need for a notch on both screens.

Speaking of the iPad Mini, I envision a foldable iPhone that looks a lot like the smallest tablet in Apple’s lineup, barely smaller.

When it comes to software, most of the basics are already present in iOS and iPadOS. Ideally, a foldable iPhone would run on some kind of hybrid operating system, using iOS on the front screen and iPadOS on the internal screen.

With iPadOS on the larger screen, you’ll still have access to the split-screen and swipe multitasking features iPad users have today.

Of course, now the front screen will look and work like the iPhone. A single column with a single application on screen at all times. 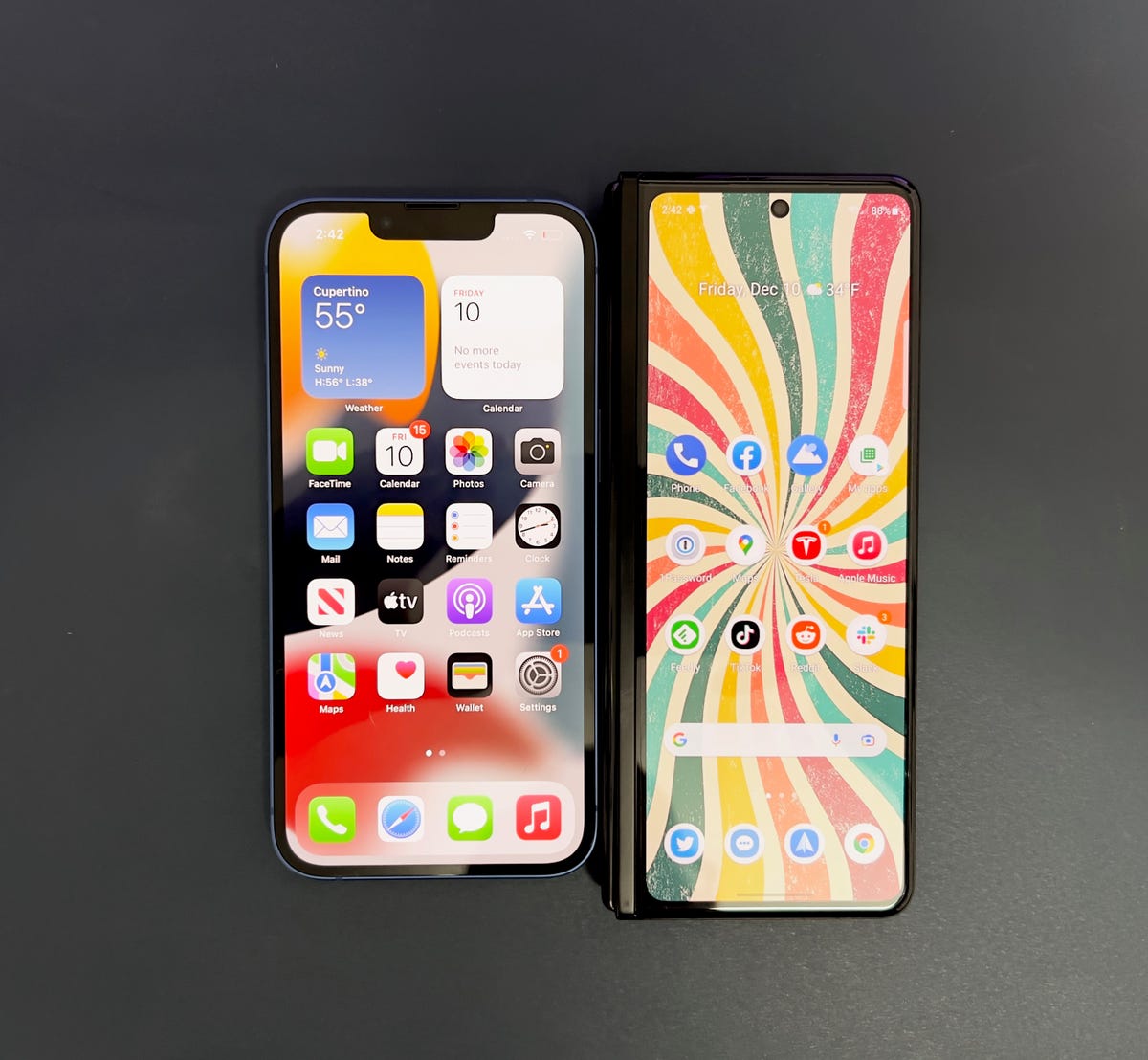 The front screen of the Z Fold 3 is too narrow. Jason Cipriani /

It’s hard to imagine a foldable iPhone without an Apple Pencil support. But it also means that Apple will have to shrink its Apple Pencil to match the height of the iPhone. This is so that it can be placed on the side and charged wirelessly via magnets, much like the second-gen Apple Pencil currently does.

Much of the groundwork has already been done for Apple’s foldable phone. The question now is whether the technology for a folding screen is ready or not, and whether the battery life can meet Apple’s standards.

I really enjoyed using Z Fold 3 and Duo 2 for the last few months. In fact, I enjoyed using the Samsung foldable device so much that I bought one for myself.

I still have the Duo 2 sample that Microsoft sent me and I plan to return to it regularly, just to keep the feel of the two separate screen experience.

Thank you Microsoft and Samsung for making me want to get excited about something again. I hope I can say the same about Apple in the near future.