To begin with, let’s clarify the subject: these are not autonomous robot vacuum cleaners, or shirt ironers or even robotic lawnmowers, but rather humanoid-looking robots, which would interact with humans to help them in the process. a bit like C-3PO in Star Wars). Storage, cleaning, laundry, meal preparation, all or part of the household chores could be assigned without the robot complaining. A dream for many, but will it ever come true?

It could well be that yes, if we believe in the performance of Bot Handy, presented by Samsung at the Consumer Electronics Show 2021. The manufacturer is in fact working on a concept of a butler robot, not quite humanoid, but nevertheless equipped with a arm. . articulated allowing you to perform many tasks. The machine is based on advanced artificial intelligence that allows it to recognize and collect objects of all kinds, fill the dishwasher, set the table, serve you a drink or even put away food, calculating each time the force necessary to manipulate all these objects.

The icing on the cake, this robot has a screen in which two eyes appear to make it more “endearing”. “Our world is different and many of you have faced a new reality, a reality in which, among other things, your home has become more important,” said Sebastian Seung, president and director of Samsung Research, during the conference of press. associated with the event. In fact, the health context and containment measures have led people to stay more at home, which has necessarily led to new organizational needs. Home robotics assistants have perhaps never been as popular as they are today.

The Toyota Research Institute (TRI) is also actively working on a concept for a humanoid robot. Its model T-HR3, introduced in 2017, is loaded with sensors that allow it to perfectly mimic all human movements. He is also able to “feel” what he is manipulating and adapt his strength accordingly. In June this year, the group announced that its robot now has new capabilities, which make it perfectly adapted to the complex tasks inherent in the home environment. It is remarkably capable of recognizing and acting on transparent surfaces, as we can see in this video.

The Toyota-developed T-HR3 can now pick up transparent objects, making it more suitable for home use. © Toyota Research Institute / YouTube

It turns out that the transparent or reflective objects commonly found in a house (a glass or any other glass object, chrome or lacquered objects, etc.) confuse most robots. “To overcome this, TRI robotics specialists have developed a new training method to perceive the 3D geometry of the scene while detecting objects and surfaces,” says Max Bajracharya, vice president of robotics at TRI. Thanks to the improved sensitivity sensors, the robot can also comfortably grasp soft objects, usually a teddy bear lying on the ground.

The Walker X robot developed by UBTECH Robotics is quite similar to the T-HR3 in terms of capabilities, but has a somewhat more “human” appearance. The latest update to the ship, introduced this summer, allows you to perform a much wider range of household tasks, such as serving tea, watering plants, cleaning surfaces or handling appliances (coffee maker, vacuum cleaner, etc.). Thanks to advanced movement algorithms, it can also adapt to complex environments (stairs, sloping or uneven terrain, etc.).

Although these robotic performances are impressive, we are still far from being a convincing humanoid robot in terms of aesthetics and stability. At this point, British start-up Engineered Arts has proven its worth: Its robot named Ameca is one of the most realistic humanoid automata ever designed. It is true that it lacks legs and artificial intelligence and, at the moment, it can only perform predefined movements. But these are borrowed from an unprecedented realism, both in terms of body movements and facial expressions, as we can see in the following video. Combined with an artificial intelligence interface developed by an outside company, it could really come close to the image we have of a humanoid home assistant.

Namely, Elon Musk also announced during Tesla AI Day held in August that he was currently preparing a humanoid robot prototype that could be ready next year. This Tesla Bot, about 1.7 meters, could be able to perform any repetitive and / or arduous task, in a domestic or professional context, such as carrying and moving objects (up to twenty kilos), shopping, etc. The Tesla CEO specifies that his robot will be “friendly” and that it will only move at 8 km / h – “potentially allowing it to escape if it becomes threatening,” jokes the businessman. This robot will be equipped with Full Self-Driving present in the cars of the brand and with cameras similar to those that guide the Autopilot. 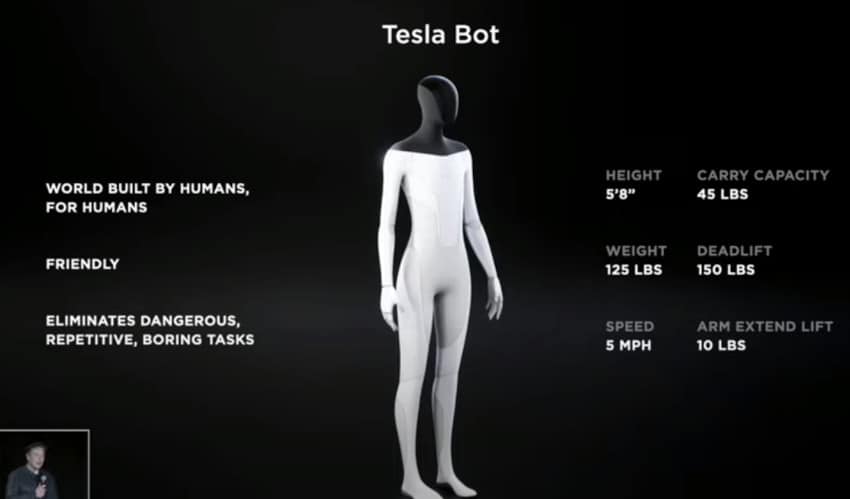 A sector that struggles to find its audience

As promising as these different projects are, their commercialization on a large scale is not for tomorrow. Several experts see robotic assistants in our future, including Rob Coneybeer, co-founder of venture capital firm Shasta Ventures, Futurism reports, but not for at least 20 or 25 years. For starters, although this type of product is in high demand a priori, consumers may not yet be entirely receptive. In any case, the sector has never really taken off until now.

As proof, the Asimo robot developed by Honda. First introduced in 2000 and considered the first robot to walk on two legs, this humanoid robot “the most advanced in the world” (according to the project site), however, had evolved quite a bit: the latest version to date, presented . In 2011, he was able to navigate rough terrain, travel at 9 km / h, open a bottle and pour a drink, and even speak in sign language. However, it was never marketed, and Honda officially ended its development in 2018. The manufacturer is now using its technology in the brand’s motorcycles and automobiles, as well as in rehabilitation devices used in physical therapy.

Likewise, the Pepper robot, introduced in 2014 by SoftBank Robotics (formerly Aldebaran Robotics), has had mixed success. This humanoid robot, originally designed for professional use (relationship with the client), was able to recognize certain human emotions (from facial expressions, tone and lexical field of its interlocutor) and react accordingly. It was first marketed in 2015, in Japan, as a companion robot – the first thousand robots were sold within a minute! It was then launched in Europe and the United States, serving as a hospitality host at certain businesses and various public venues. But in seven years, only 27,000 units have been sold. In July 2021, faced with a drop in demand, SoftBank announced that it would stop production.

Does the concept respond to a real need?

Regarding Pepper, features considered too limited and relatively frequent failures could explain why the public ultimately did not accept the concept. The other projects seem more reliable, but it must be recognized that among the ongoing projects, other than Engineered Arts, few show a truly humanoid appearance, which, for some experts, is still fundamental. “It is often said that a human form is useful because the robot can use the same tools and the same environment as a human, but another important reason is that it is easier for humans to control robots. Humanoid form,” he said Tomohisa Moridaira, director of the T-HR3 development team, in a statement.

At this point, Hanson Robotics really stands out from its competitors. Their robots really look human, their heads are even covered in a synthetic silicone skin, which is fluffy and flexible. They can also reproduce a wide range of facial expressions. His robot Sophia, famous for having obtained Arab citizenship in 2017, is considered one of the most sophisticated humanoid robots ever built. His neural networks would allow him to perceive the emotions of a person according to the expression of his face and the timbre of his voice.

That said, some artificial intelligence experts remain skeptical, arguing that it performs little better than chatbots designed to formulate out-of-the-box responses based on certain keywords. It wasn’t designed for housework either, but Hanson released the cognitive robotics platform that his robot relies on to allow other teams to develop other applications and services.

Democratizing the use of a humanoid home robot will not be easy. The idea is attractive in theory, it is still necessary that it be accessible to the greatest number (economically speaking) and that the investment is really justified. A few years ago, Greg Shirakyan, an engineer at Microsoft Robotics, mentioned three reasons that could explain the absence of domestic robots in our homes: 1) our private environments are designed to be used by humans and not by machines; 2) the robot’s lack of social intelligence; 3) the lack of a clear idea of ​​what a home robot should look like.

It turns out that most of the household chores that are considered useful today can already be taken care of by many connected devices. And while existing robot prototypes are capable of multitasking, they are not completely autonomous either. How would a vacuuming android be more interesting than a “simple” robot vacuum?

Do robots necessarily have to look like us to do the work we want them to do? Is the public really willing to pay a large sum (the professional version of Pepper sold for 20,000 euros!) For a robot to serve them their orange juice every morning?

Apart from a real role of assistant, companion for the elderly and / or people with reduced mobility, I am not sure that the public really wants to host a synthetic domestic help at home, at least for the moment. However, the day that such sophisticated machines become available, fully autonomous and that perform all the household tasks without problems (in thirty years according to some experts), the discourse will be different.